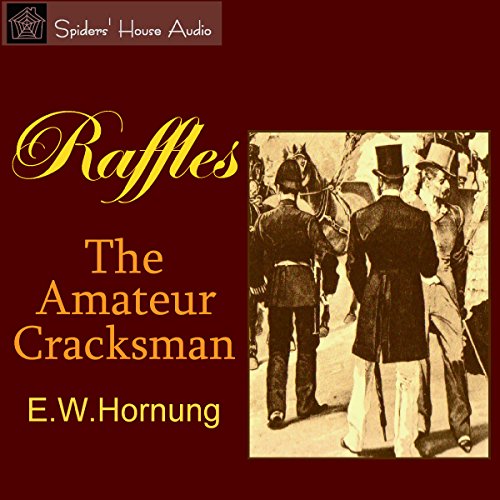 Ernest William Hornung (1866-1921) was born in Middlesborough, England, and educated at Uppingham School, Rutland. He spent two years in Australia for his health, returning to England in 1886. In 1893, he married Sir Arthur Conan Doyle's sister Constance and five years later the first of his stories of Raffles the gentleman burglar appeared in Cassell's Magazine. More stories followed and proved extremely popular.

The first collection of the exploits of A.J. Raffles and his friend Bunny Manders was published as The Amateur Cracksman in 1899. The characters of Raffles and Bunny were possibly inspired by his brother-in-law's creations, Sherlock Holmes and Dr. Watson, although they are on the opposite side of the law.

The activities of the gentleman cricketer and his associate are highly questionable, but "he never steals from his hosts and he helps his old friends in trouble".

The stories are: "The Ides of March", "A Costume Piece", "Gentleman and Players", "Le Premier Pas", "Wilful Murder", "Nine Points of the Law", "The Return Match", "The Gift of the Emporer".

What listeners say about Raffles: The Amateur Cracksman

The flip side of Sherlock Holmes

Author was Arthur Conan Doyle's brother in law and modeled his main characters after Holmes and Watson. If Holmes had decided to become a master thief instead of a detective, this may be what he wouldn't been like.

There are various versions of this book in Audible some under different names. In my humble opinion, this narrator is the best. He creates different characters with his voice so well that I had no trouble in telling who was speaking in the many scenes where Raffles and Bunny conversed.