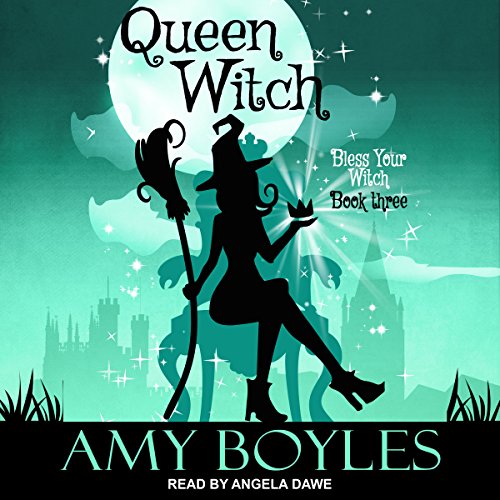 Dylan Apel just wants to run her dress-design shop, spend time with sexy witch detective Roman Bane, and do her best to keep her crazy family out of trouble. But when the new witch queen is murdered, Dylan is chosen to take her place as interim queen of the South!

Shouldn't be a problem for a strong witch, right? But stricken with guilt after an unfortunate accident, Dylan's been neglecting her studies. Now she must help find a fiendishly clever murderer before someone else dies. Even worse, if she and Roman cannot deduce the culprit, Dylan may be forced to give up her powers in the worst possible way - by dying herself.

Trapped in Castle Witch with a wide array of magical suspects and an incredibly annoying wooden parrot, can Dylan and Roman discover in time who is lying, who's telling the truth, and who's the killer?

What listeners say about Queen Witch

The most aggravating and frustrating thing about getting into this series is that there are so many books in the series and only three audible. This series and Amy Boyle‘s other series only have the first couple of books in audio.Extremely frustrating

Amy Boyles has crafted a very entertaining cozy mystery series with a lot of humor mixed in to the stories. Angela Dawe does an excellent job of bringing it all to life.

I AM READY FOR BOOK 4 TO SEE WHAT NEW MYSTERY THESE WITCHES FIND, BUT I CANNOT FIND THE BOOK ON AUDIBLE. WHAT HAPPENED?