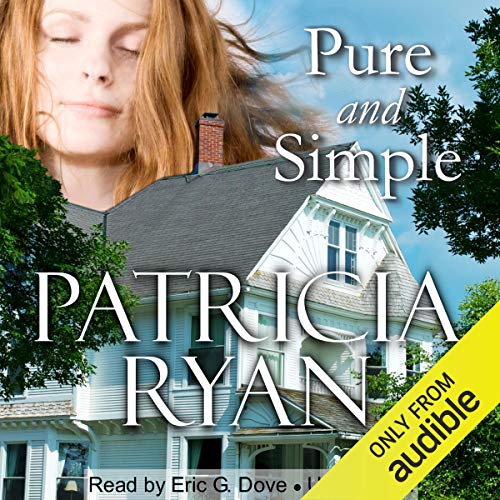 Ally Turner is shaken by the death of her childhood friend, starlet Willow Scott - and horrified when devilishly charming Tom Proctor starts digging into Willow's past for a tell-all bio, threatening to unearth a scandalous secret that must be kept hidden at all costs.

One Of The Best Books I've Heard in a Long Time

I didn't want to stop listening to it, but because of the length of the story, I had to break it up. It was a little confusing in the beginning with so many characters being introduced all at once. But soon, under the expert pen of Patricia Ryan, each character took on their personal identities. The hero, Tom Proctor, an ex-crime reporter, is hired to write the tell-all Bio of Willow Scott, a movie star, who died before giving him all the details of her life. Willow wants Tom to write the truth about her life, so he needs to do what he does best, investigate.

His research takes him to the small town Willow grew up in, and to the Turner family who took her in after her mother's body is identified as the one found in her small home on Cholra Road. Hanna Scott , a hippie, died Willow's senior year on Halloween.

Ally Turner, our heroine, was Willow's best childhood friend--now EXfriend. Tom came for Willow's funeral in her hometown which was overseen by Dorthy Turner, Ally's mother. Ally's father, Hart Turner, had died in an auto accident the same night Willow ran away from the Turner home. The list of Turner characters are: Ally Turner and her mother, Dorthy, her small dog, Snowball, Ally's younger sister Brook, and Willow's confidant, her older brother Hart JR, who does not make an appearance at the funeral.

There is Vincent Furley, a movie/TV star, and Willow's ex-lover. There's also Hart JR's best friend and local law officer, Ethan, who looks after the Turner ladies. Ethan became Cheif of Police after the alledged suicidal drowning of the late Cheif of Police, although no body was ever found.

Tom wonder's what Ally, who was Willow's best friend through high school, had against Willow, and knows she is hiding something.

Eric G. Dove gave an excellent performance. He does women voices better than other male narrators I've heard. He has a well modulated voice I could listen to all day. I will be looking for books he narrates.

I highly recommend "Pure and Simple".

i loved the combination of romance and mystery in this book. the characters were very realistic and i found myself hoping situations would turn out a certain way. the narrator, who i've never heard prior to this book, is terrific. i especially enjoy when one narrator takes on multiple voices during a book and the narrator did it well. i knew it was a man speaking in a woman's voice, but it didn't detract from the book itself as has happened to me in the past. i'll be watching for more audiobooks from ms. ryan and more narrations from mr. dove.

What made the experience of listening to Pure and Simple the most enjoyable?

Being able to just sit back, relax and listen to the story unfold

What was one of the most memorable moments of Pure and Simple?

Finding out that not all is what is seems

If you could take any character from Pure and Simple out to dinner, who would it be and why?

This was my first time listening to an audio book and it was an experience. The narration once I got used to it wasn't bad....although any Texan would probably not recognize the accent. On to the story itself....it shows how misconceptions about someone that you think you know aren't all they seem to be....that forgiveness truly comes from the heart and hiding from secrets can only lead to sorrow....or maybe awakening.

What did you love best about Pure and Simple?

I good story, kept you guessing.

It was an easy listen; I could put it down and come back to it.

Which character – as performed by Eric G. Dove – was your favorite?

Who was the most memorable character of Pure and Simple and why?

Tom - laid back and total man!

I was smiling. A few times I’m chuckling, not because it’s funny, but because I’m surprised and enjoying things.

Tom comes to town to research a book he’s writing. Ally is keeping a secret about something that happened fourteen years ago. The reader knows the secret, but Tom does not. Ally wants to keep it that way and does things to hide facts from Tom. So the reader is wondering IF Tom will figure it out and HOW. Tom’s discovering past events is well done. He learns pieces of the puzzle little by little. At the end he’s got it all. I liked the way it worked. Some authors use a “tell all” at the end which is the easy way out. This book does it the better way.

This has more depth than I’m used to in romance novels. Various characters - nuanced - interesting. I was surprised and impressed with Ally’s sister Brooke - how people would tell her things and what she did and said. And she’s a secondary character. Dorothy is the mother of Ally and Brooke. Brooke was smart and understood things about the mother that Ally couldn’t see. The mother was an insidious manipulator. By the end of the book I hated the mother. Ally was ignorant about Dorothy. Ally thought Dorothy was fragile and needed protection.

THE RELATIONSHIP:
Forget about those bad boy alpha types. I loved the character Tom - my kind of guy - his Texas drawl and his southern gentleman ways - and a former pro football player. (Ok I suppose there’s some alpha underneath there. And I loved the way he beat up somebody.) I loved the way he treated Ally during sex and during their relationship. This was a slow developing relationship. As to their conflict: Ally thinks her mother needs protection, so she lies to Tom. Ally lacked good judgment. After they start working together, Tom wants to trust her and asks her not to lie anymore. She agrees, but she continues lying. I was mad at her. The Spoiler talks about their fight/separation and an odd-for-me-thought about it.

CAUTION SPOILER:
He breaks up with her when he discovers her lies. I wanted him to stay that way. She did not deserve to be forgiven. How could he trust her in the future? I was surprised with MYSELF that I was going to be happy with them not together - anathema for me - a romance novel junkie! But he loved her, so he forgave her. I was ok with that, but I was going to be happy for him to find someone else - in another book.
END SPOILER.

AUDIOBOOK NARRATOR:
The narrator Eric G. Dove was good and very sexy as Tom. But his voice for Ally’s mother Dorothy was screechy and weird. I wish he would have toned that down.

Just couldn't get through it 👎🏽

Would you try another book from Patricia Ryan and/or Eric G. Dove?

Sorry, I've read many PR books and loved them, but I found this one...unbearable.
After listening for approx an hour in various increments, I found myself asleep. 😬

Tom & Ethan are a couple of seriously great guys

I liked this book. I took advantage of a sale on romance novels to try some new authors -- and I found this book to be a pleasant diversion. I may investigate some other Patricia Ryan titles.

The female lead, Ally, took herself a little too seriously -- but the male lead, Tom, was my kind of guy. Smart, observant, curious, incisive, good looking, honest.

The story was interesting and did not drag. The mystery unfolded at a good pace and allowed the two main characters to grow on each other in a believable manner.

There is potential for a second novel in the characters of Ethan and Brooke. I want to know more about Ethan. I really liked him and would definitely read another book about him.