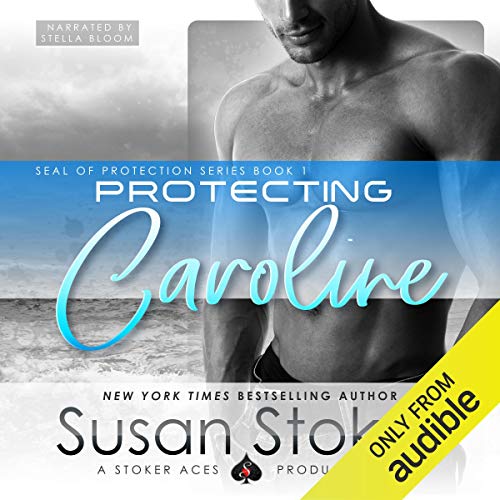 By: Susan Stoker
Narrated by: Stella Bloom
Free with a 30-day trial

Matthew "Wolf" Steel hated flying commercial. Luckily his job as a Navy SEAL meant he didn't have to do it very often. He'd been unlucky enough to be assigned a middle seat on the cramped jet, but fortunately for him, the woman next to him was willing to switch seats with him. Hoping for a relaxing flight, Wolf was pleasantly surprised at the good conversation and sense of humor the woman had as they flew 36,000 feet over the countryside. When Caroline boarded the plane to Virginia to move across the country for her new job she never expected to be seated next to the hottest guy she'd ever seen. She also never expected he'd be so easy to talk to. She knew he'd never be interested in talking to her if he hadn't been trapped in the seat next to her, but it was a nice way to spend a long plane ride. Neither Wolf nor Caroline were prepared for a terrorist hijacking of their plane, but if Caroline thought that would be the last time she'd see, or need, Wolf, she'd be sorely mistaken.

What listeners say about Protecting Caroline

Thriller and Romance in one

Listened while commuting. Couldn't wait to get out of work to hear more.
Very likeable characters

I had forgotten I had purchased this book previously, but need something to listen to while I painted my deck. I thoroughly enjoyed the reading. The story was fast moving with plenty of action. Since I was outside I was glad there was not and dialogue I would be embarrassed for my neighbors to hear. By evening, I was so enjoying the story I didn't watch TV which I normally do and settled into bed listening to the rest of the story. This had made me a true believer in the fun of audible books.

This book is awesome!! There was the right amount of balance between suspense and romance to hold my interest all the way through. There were no slow spots, and no boring spots. The story line is really interesting. I wish I was as brave as Carolina!
The reader has a really nice voice, and she did a nice job at changing her tone for each person.

I wish Stella Bloom would read my other favorites by Susan Stoker. She was great!

The romance here is solid and the story-ride enjoyable. Eventually. Meaning, it took a while for this book to get on with it: first there was a fair bit of background given in the beginning about each character (and not just the hero and heroine’s background); second there was a lot of internal monologue and internal dialogue before the hero and heroine spoke to each other. That waiting time was a bit long for me. But once they officially met, the suspense element of the story was off and running and action-packed.

The novel is the first in a series but a stand-alone. You are introduced to the hero “Wolf” and his team of SEALs and you get to know them well in this book because sometimes the story switches to individual team members’ points of view in addition to the hero and heroine’s points of view (all in third person). Those SEAL team members will appear as the hero in their own books. They are admirable men and easy to like.

This book was different to anything I’ve ever read before because I didn’t expect the heroine to suffer the way she did (though not in a sexual way). It was brutal.

This story was light and simple and I enjoyed it even if it did have some dark and heavy terror, because I was prepared to suspend my disbelief. The falling-in-love part was sweet in the dangerous atmosphere. Towards the end I had a physical reaction to the emotional pain the protagonists experienced and that is what I WANT to feel when reading romance. It means I care about the characters. And that's good. But this novel didn't make my heart leap or my breath stutter. So it's 3 stars for me because the romance is nice, and mostly enjoyable.

The narrator was fine, but not my favourite.

this was TERRIBLE... couldn’t listen anymore...slow boring story & come on could the author said SEAL anymore?

super cheesy, couldn't finish it. so outrageously unbelievable. I would not recommend wasting the time

Author writes as if she is in high school

Very boring novel. The author writes as if she’s in high school. She also knows nothing about the military.

The worst Heroine ever.

The plot of this novel was ok. It was very similar to another Seal romance I have listened to, but was different enough to keep me entertained. However, the Heroine was the most insecure, annoying and self critical character I have ever been exposed to. She is constantly saying that she is so unattractive and uninteresting that all men just ignore her existence. No one at work will offer her a ride home or be her friend because people just look past her. These statements are repeated so much, I wanted to scream. In addition, there isn't a single sex scene. Shouldn't every Romance have at least one?
-V from Kansas

the story base would have been good except, the author repeated the names of the characters so often it got annoying. It also sounds like it's read by a 13 year old girl . I would not recommend this book or any other of this series, I hate that I wasted one of my credits on it

Struggled to finish wincing at phrases not only lifted from worst Harlequins but repeated and repeated all over. Not a bad story but badly written.

book was excellent, already had the written version. Well narrated but would have been better with more than one narrater.

so worth it.. you must read this story .. you will fall in love with these characters...you will be craving for more...💗👄💗