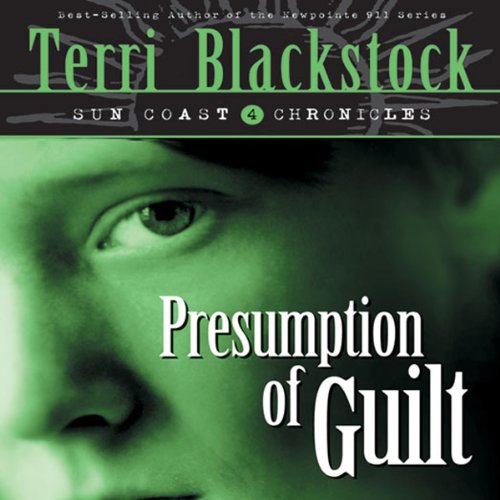 Reporter Beth Wright is hot on the trail of a story that could expose an ugly scandal at the St. Clair Children's Home. But there's another hunter on the scene, someone who wants to make sure the story never sees print - and who isn't averse to lethal means, either. Nick Hutchins, a social worker, has his own uneasy hunches about the children's home, which are confirmed by Beth's investigation, a high-speed attempt on her life, and finally the startling confessions of an intruder. An appalling picture emerges of helpless children under the sway of a modern-day Fagin. There's one person who can save the children: Beth herself. But using the key could cost her reputation - or her life. One of the Sun Coast Chronicles, Presumption of Guilt is a gripping portrayal of the depths of human evil, the soul-twisting influence of lies, and the far-reaching freedom of God's mercy and grace.
©1961 Terri Blackstock (P)1999 Zondervan
Romance Thriller & Suspense Suspense Ministry & Evangelism
Show more Show less

What listeners say about Presumption of Guilt

Loved it. Listened to the whole thing in 2 days. I couldn't listen too late because I would want to stay awake to finish it.

This is just the sort of crime drama worth reading or listening to. It is exemplary if the ways God uses to draw people to him. I hope there'll be a fifth book in the series, it be nice to continue exploring character development.

Loved it. Another good book by Terri Blackstock. Have not read one that I did not really enjoy.

Didn't care for this one

I like most of the books by this author, but this one didn't hold my attention.

This audiobook is not worth the money it costs or the time it takes to listen to.It is a badly written story .