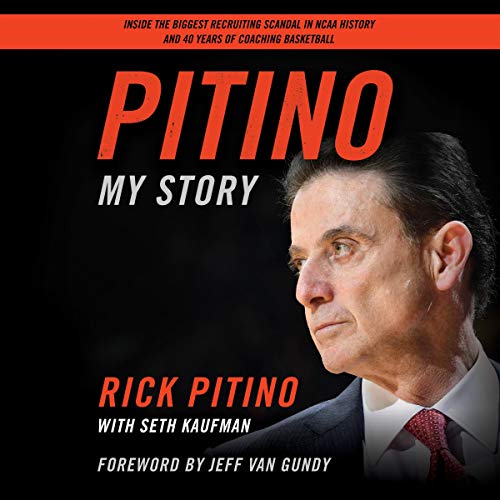 On September 26, 2017, the biggest recruiting scandal in college basketball history sent shock waves through the world of sports. Caught up in a massive FBI and NCAA investigation - and the intense media spotlight - was Rick Pitino, the Louisville Cardinals’ Hall of Fame coach.

Here, from Pitino himself, comes the real story of the ongoing case and the hard truth about how college hoops has been pushed to the brink of disaster by greed, bad actors, and shoe company money.

Rick Pitino has spent a lifetime in basketball. He is the recruiting and coaching maestro behind Final Four appearances with three different teams, and National Championships at two of them. He worked the early days of the legendary Five-Star camp and scouted players without the influence of agents, runners, or shoe companies. And he has run today’s recruiting gauntlet of sports apparel marketing, corrupted assistant coaches, unethical youth coaches, and powerful organizations hellbent against him. Rick Pitino has seen it all, dealt with it all, and now tells it all while offering his take on what needs to be done to save the game he loves.

Pitino is the story of an epic coaching career and the evolution of NCAA basketball to the multi-billion-dollar enterprise it is today. It is also a master’s course on the arts of coaching and recruiting. And in the telling, the one and only Rick Pitino lays all his cards on the table in addressing scandals of his past and the current headline-grabbing investigation that led a packed Board of Directors at Louisville to derail his career.

What listeners say about Pitino

Public Defense rather than biography

If you're hoping to hear the details about Rick Pitino's illustrious basketball coaching career, you'll be disappointed with this Audible. This bio spends little time taking about the ins and outs, personal relationships, conflicts, ups and downs of the seasons that he went to the Final Four with Providence, Championships with UK and UL. he glosses over those seasons too quickly. He doesn't talk about memorable games that led to those championships. He barely talks about the players involved in those games.

Sadly, the final chapters are very detailed attempts to defend his reputation, which was marred by the stripper scandal at UL. This book even has chapters dedicated to his opinions on the shoe industry and AAU influence on college recruiting. This book is an attempt to vindicate Pitino from the public defamation of the scandals that w while he coached UL. I'm disappointed that he spent so much energy defending himself as opposed to giving us an inside look at his most memorable seasons as a coach.

Pitinos attempt to throw people under the bus is evident. Needs to blame himself more often. But great book. Nice to know his background and where it all started.

Raised up many great programs and deserves to be honored. Thanks for sharing your life story

Two Sides to Every Story

Rick Pitino finally gets the opportunity to share his side of the story unfiltered by the compromised press corps and DOJ. This is a fascinating tale that will be highly interesting to college basketball fans and coaches alike. I couldn't put it down.

The one criticism I have of Coach Pitino is that the buck does not stop with him. Despite that, I feel he is remarkably transparent in this account, and his criticisms of the NCAA the DOJ are mostly valid.

Still a class act in my book

I loved Pitino as coach of UofL and I love him after he left. I imagine taking care of all those people is like taking care of a teenager. We hope and pray they do the right thing but we know that they are going to be rebels and do what they want. At the end of the day it's up to others to police themselves accordingly. Great job coach best of luck.

Outstanding insights into "following the Money"

Articulate and sincere. Rick Pitino is a human who has made mistakes ... but no more than anyone else. Anyone who knows about him who would like to read the real truth and NOT the Fake news spread by his distractors ... Anyone who wants to really understand what happened to this great basketball coach must read this book.

I expected more color of his accomplishments. Looks like he got hosed by the school. Thanks