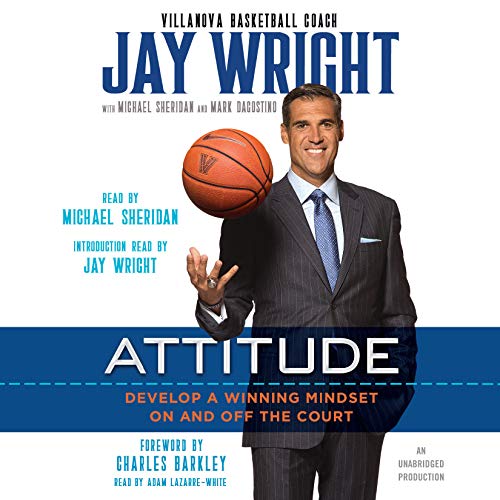 In this behind-the-scenes look at the making of a champion, the coach of the Villanova University men's basketball team shares his competitive and cooperative philosophy along with lessons from his coaching career and the story of his personal road to success.

When Kris Jenkins sank a three-pointer at the buzzer to win the 2016 NCAA Tournament, it was a victory not just for a team and its coach but for an entire program. In his 20th season with the Villanova program, including a five-year stint as an assistant to Coach Rollie Massimino, Coach Jay Wright had achieved his lifelong dream - and witnessed the culmination of a decades-long effort to build a culture of winning around a set of core values.

In Attitude, Coach Wright shares some of the leadership secrets that have enabled Villanova, a private university with an undergraduate enrollment of less than 6,500, to thrive in the hypercompetitive world of college athletics. As he recounts the story of the 2015-2016 Wildcats, Coach Wright offers anecdotes from his own journey up the ladder of success, with lessons learned on the Little League playing fields of his youth and wisdom passed down from his coaches and mentors.

Each step of Villanova's journey to a national championship incorporates a signature term torn from Coach Wright's own motivational playbook. Here are key principles that aspiring leaders can apply not only on the basketball court but in the boardroom, the classroom, and the living room. From learning to accept your role to remembering to honor those who came before you, Jay Wright's core values provide a positive blueprint for transformational team building based on the idea that anyone - from the head coach to the last player on the bench - can be a leader when the moment demands it.

The product of a lifetime's worth of championship-level preparation, Attitude is perfect for anyone looking to build a team, achieve a goal, or nurture their own winning culture.

Read by author Mike Sheridan, with the introduction read by author Jay Wright and the foreword read by Adam Lazarre-White.

"Jay Wright's Attitude is filled with wonderful anecdotes, life lessons, and that which we all seek: wisdom." (Phil Knight, cofounder and chairman emeritus, Nike)
"In 2015-2016, Villanova displayed the best attributes of a champion by playing hard, smart, and together. Jay Wright instilled those traits in his team, and in Attitude he shares the universal leadership lessons that helped it succeed." (Mike Krzyzewski, head coach, Duke University basketball)
"In my four years at Villanova, Coach Wright taught me what it means to be a respected leader and how infectious a positive daily approach can be. Reading Attitude made me feel like I was right back with my teammates in a circle at center court after practice, listening to Coach's insight into how I could become a better player and a better leader." (Ryan Arcidiacono, cocaptain, 2015-2016 Villanova Wildcats)

What listeners say about Attitude

Great story filled with lots of sports, career, and business advice. This book really brings home the truth that a team is so much more than the sum of its players. Phil does a nice job narrating although I prefer Jay's somewhat deeper voice in the introduction.

Excellent story of Jay Wright and the Villanova Wildcats.
Must read for for College Basketball fans and for understanding of how faith and college sports successfully intersect.
Only shortcoming is lackluster narration.

Masterful! A must read for Players, Coaches And Business Leaders!!

Jay's insight and personal touch in revealing the journey to the National Championship that began with each coach and leader who influenced him producing the Villanova Culture "Attitude" and the little things that you must do to create the habits necessary to perform in life.

Well done Coach Wright!! Everybody has a different Role but has the same status.

Great book from an even better person. I learned a great deal and feel very thankful for MR. Wright to have made this book.

Something all coaches should hear. no matter the sport. As a basketball Coach it has inspired.

Any individual who has played, watched or enjoys the game of basketball will learn incredible life lessons from this book.

Jay Wright is a special coach!

Jay's love for the sport of basketball, Villanova and each of players radiates throughout this book.

This is a great book by a great man.

His tone near perfect. His stories to the point. His faith in God's providence uplifting and clear, yet not imbalanced. Villanova's recent 2018 victory adds all the more, to the credibility of the testimony of this self-effacing effectual leader; and to the winsome character of Villanova's "rightly attituded" remarkable team - the NCAA two time championship Wildcats. Who were led not by the proud and losing laid back. But by the "humble and hungry" champion of champions, the winning Coach Wright!

Would you try another book from the authors and/or Michael Sheridan?

This is a self-promotion book. No word on how to develop a winning mindset - at least I couldn't find it. It's more about religion/faith than about winning.

Would you listen to another book narrated by Michael Sheridan?

Not recommended for those who are not into roman catholicism.

Enjoyed this. Narrated well and written well. Jay Wright you are awesome, love the way you led this team with values at the forefront. Building good men of character who happened to play basketball. Go wildcats!