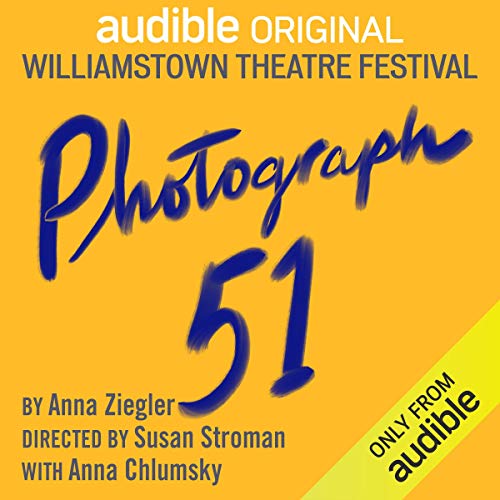 Go Behind the Scenes of Photograph 51

In 1951, chemist Rosalind Franklin (Anna Chlumsky) works relentlessly in her King’s College London lab, closing in on a major discovery that could unlock the mysteries of the DNA molecule. Undermined by her colleague Maurice Wilkins (Omar Metwally), she struggles to compete with rival team Watson and Crick (David Corenswet and Aasif Mandvi) as pressure intensifies to produce results.

Following a critically acclaimed run in London, Anna Ziegler’s play is brought to life in a new production directed by five-time Tony Award winner Susan Stroman, honoring the monumental contribution of one scientist with two X chromosomes whom history nearly left behind.

Anna Ziegler’s plays include the widely produced Photograph 51 (West End, directed by Michael Grandage and starring Nicole Kidman; named the number one play of 2019 by the Chicago Tribune; winner of the WhatsOnStage Award for Best New Play; it will soon be included in Bloomsbury's Modern Classics series), The Last Match (Roundabout; Old Globe; Writers Theatre), The Wanderers (Old Globe and upcoming at The Roundabout) and Actually (Geffen Playhouse; Williamstown; Manhattan Theatre Club; Trafalgar Studios and many more; L.A. Ovation Award winner for Playwriting for an Original Play). Oberon Books has published a collection of her work entitled Anna Ziegler: Plays One. She is developing TV and film projects at HBOMax and Scott Free Productions.

A five-time Tony Award winning director and choreographer, her work has been honored with Olivier, Drama Desk, Outer Critics Circle, Lucille Lortel, and a record five Astaire Awards. She directed and choreographed the Tony Award-winning Best Musicals Contact, and The Producers, winner of a record-making 12 Tony Awards. Broadway credits include The Scottsboro Boys, Show Boat, Bullets Over Broadway, Big Fish, Oklahoma!, Young Frankenstein, Thou Shalt Not, The Music Man, The Frogs, Steel Pier, Prince of Broadway, and Crazy for You. Off-Broadway credits include The Beast in the Jungle, Dot, Flora the Red Menace, And the World Goes ’Round, Happiness, The Last Two People on Earth: An Apocalyptic Vaudeville, and Marie. She directed and choreographed The Merry Widow for the Metropolitan Opera. She directed and choreographed The Producers: The Movie Musical, nominated for four Golden Globes, and received the American Choreography Award for her work in the film Center Stage. She is the recipient of the George Abbott Award for Lifetime Achievement in the American Theater and a member of the Theater Hall of Fame.
Original Music Composition and Sound Design by: Darron L. West
Dialect Coach: Barbara Rubin
Assistant Director: Maya Davis
Executive Producer for Audible: Kate Navin
Producer for Audible: Jessica Amato
Executive Producer for Williamstown Theatre Festival: Mandy Greenfield
Producer for Williamstown Theatre Festival: Lindsey Turteltaub
Staff for Williamstown Theatre Festival
Antonello Di Benedetto, Director of Audience Engagement
Mandy Greenfield, Artistic Director
Henrietta Key, Development Coordinator
Aileen Lambert, Literary Manager
Lucie Ledbetter, Line Producer
Josh Martinez-Nelson, Director of Development & Communications
Amy Russell, Director of Finance
Laura Savia, Associate Artistic Director
Lindsey Turteltaub, Director of Production
Lianna Rada-Hung, Assistant to the Artistic Director
For over six decades, Williamstown Theatre Festival, recipient of the Tony Award for Outstanding Regional Theatre and the Commonwealth Award for Achievement, has brought emerging and professional theatre artists together to create a thrilling summer festival of premiere work alongside fresh, new productions of the western canon, accompanying cultural events including Community Works and Late-Night Cabarets, and readings and workshops of new plays. Under Artistic Director Mandy Greenfield, WTF launched the Andrew Martin-Weber New Play and Musical Commissioning Program, through which theatre artists, including Jocelyn Bioh, Nathan Alan Davis, Halley Feiffer, Justin Levine, Matthew Lopez, Jiehae Park, Benjamin Scheuer, and many others, create new work supported by a year-round play development program. WTF runs unmatched training programs for new generations of theatre talent, and artists and productions shaped at WTF fill theatres in New York, London, and around the country each season. Williamstown Theatre Festival’s productions of The Bridges of Madison County, The Elephant Man, Fool for Love, Living on Love, and The Visit enjoyed critically acclaimed runs on Broadway, with The Elephant Man and The Visit receiving Tony Award nominations for Best Revival of a Play and Best Revival of a Musical, respectively. WTF's world premiere productions of Cost of Living (winner of the 2018 Pulitzer Prize for Drama), Actually, Paradise Blue, and Moscow Moscow Moscow Moscow Moscow Moscow played acclaimed Off-Broadway runs. In the abbreviated 2019-20 theatrical season, Williamstown Theatre Festival was represented or scheduled to be represented on Broadway, Off-Broadway, and regionally by The Sound Inside and Grand Horizons, both of which received Tony Award nominations for Best Play, The Rose Tattoo, Seared, Selling Kabul, Unknown Soldier, and Lempicka. Visit us at www.wtfestival.org. 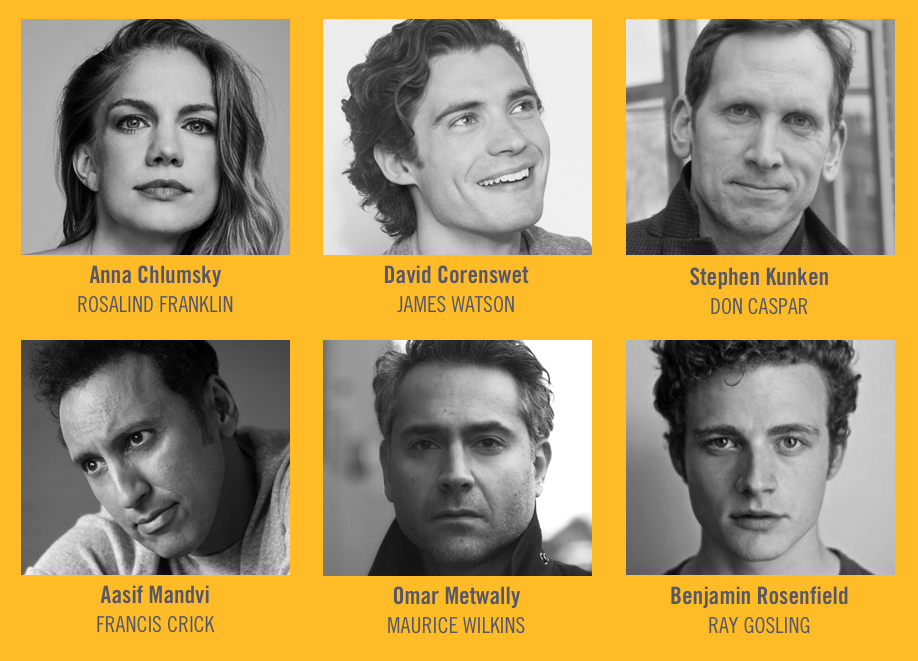 What listeners say about Photograph 51

I don’t often use the word riveting but it certainly describes this production. I love that Audible is offering such great work. The actors are amazing. The writing is so good. Listening to it brought the characters to life. The actors couldn’t have been more perfect for this. Funny, informative and sad, Photograph 51 is one of the best productions Audible has produced. I hope they consider doing more like it.

this is simply exquisite! (and i learned now how to spell that word just for this) poetic theater, heart meets head and there's no going back. enjoy :)

Unveiling the Helix - In Collaboration and Isolation

Beautifully written about classical themes - left me in tears and thoughtful. Not offensive in its portrayal of the human challenges in those who triumphed in science through intentioned and accidental efforts. Unveiling the very human story behind the discovery of the shapes of DNA with all its social and personal nuances.

I did not realize that this was the audio version of a play. I thought it was an audio drama. It concerns the work of a forgotten female chemist Rosalind Franklin and her photographic work on the search for DNA. The cast was wonderful, but I had a difficult time with this work. She comes off as such a bitch, it's hard to feel any sympathy for her. Despite the usual things a woman had to deal with in the earlier eras, her attitude and personality ensured she would have few friends or achieve heights in her work for what she refused to do. Her character flaws made a great many people dislike her. I felt bad for her partner, who went out of his way to be accommodating and she was just a bitch. Her snobbery and utter disdain for others stood out most and she had few redeeming qualities. Glad it was free, a one time listen. A section follows with an interview with the play's creators.

A Vehicle For Nicole Kidman

I lamented missing this at The Noel Coward Theatre in London’s West End- It was supposed to come to Broadway-When Nicole dropped out, I would assume it was not financially advisable to mount this in New York- I really appreciate that Audible allowed this to recorded

I enjoyed the voice actors very much, except for the one so-called American who kept exaggerating his Rrrrrs. That got to be annoying. Bu the story itself was good, and a huge step up for women in science, as it is a true story. Thank you to those of you who put this all together!

Brilliant in so many ways

Everything is great about this, from the real life subject on which it was based to the quality of the performance and everything in between and everyone involved.

It made me cry

OMG I did not expect the end. I won’t say more. Enjoy & be patient. Excellent

Loved it. A great record of what (might have) happened in this real life race to discover the secret of life. An interesting exploration of all the people involved and a clever way of presenting their individual viewpoints of what really happened. Great acting too.