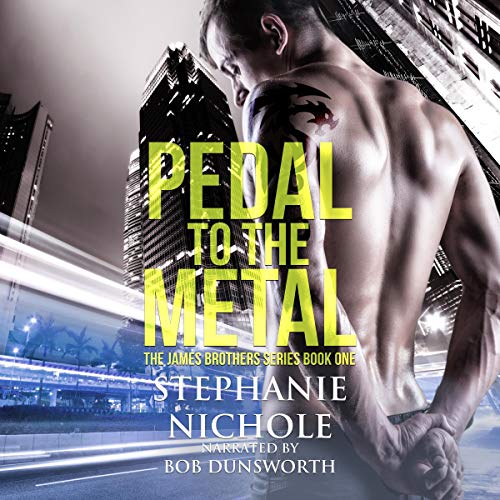 Pedal to the Metal

By: Stephanie Nichole
Narrated by: Bob Dunsworth
Try for $0.00

Pedal to the Metal is a fast-paced love story about overcoming heartache and learning how to fall in love again. The James Brothers series will follow a family of five brothers living in Los Angeles. The James brothers have a reputation of being the bad boys of the street racing world. Their world revolves around all things cars, including owning a car shop. Pedal to the Metal follows the story of Jagger James.

Five years ago a tragic accident changed Jagger’s life forever. He ran from LA to Las Vegas, leaving his father, four brothers, and former life behind. Now, after his father’s death, he’s returning to help his brothers with the family business and regain his former street racing reputation. On his first night back in town, his path crosses with Londynn at the races. She awakens something in him that he hasn’t felt since that fateful night years ago.

Londynn Parrish may look like your typical rich girl, but she’s far from it. Her entire life has been prepared and handed to her, but all she craves is freedom. Freedom to make her own choices and build her own life. Even if that means leaving behind the life she knows and moving forward with one of the James brothers. Jagger is your typical bad boy with a tortured past who grew up on the wrong side of town. He’s been gone for five years, but he’s back now, and neither Londynn or Jagger can deny the pull they feel for one another.

Can Jagger let go of his past and create a future with Londynn? Can Londynn let go of the life prepared for her? Londynn has secrets of her own she’s trying to hide, but will Jagger be the one to bring the wall down?

What listeners say about Pedal to the Metal

This was my first Stephanie Nichole's book. This is the first book in the James Brothers Series. Londynn and Jagger are opposites attract. Their second chance at love is interesting and emotional, filled with drama, action, and twists and turn. The street racing world is well done. Bob Dunsworth did a good job with the narration. Looking forward to listen to the next book in the Series, Breaking the Limits, Ace's story #AudiobookObsession

This is the first book that I've read/listened to by Stephanie Nichole. I love romance series about family. They are favorites of mine and I look forward to the next book.

Jagger and London had a bunch of on again, off again romance so the drama was real. There were times I wanted to throw my phone. Just get together already. I stuck with it because I was dying to know how the story played out. I was disappointed not to be able to listen to it quicker. I really liked the characters and want to see how the other couples work out. The ending to this was sudden. I hope the others don't end the same way.

Bob Dunsworth did a good job. I felt like he put his all into the performance. The female parts were more difficult when there was drama going on, but the performance really could have been way, way worse. He has a nice gravely voice.

Jagger James and his brothers rule street racing, always eager to take the money from rich kids. Jagger left town to the Las Vegas racing scene, after girlfriend and unborn baby died in a car crash. He returns home 5 years later.
Londynn Parrish, the rich girl, who follows all the rules. Everything is about appearances. How she dresses, her friends, all decisions are made for her, even who she is to marry. No love, no real friends, no choices.
There's something about Jagger when she met him. He's everything opposite of what her parents would approve. The guy from the other side of town, that makes her feel alive. He awakens emotions in her, that she hasn't felt before.
Bob Dunsworth a pleasure to listen to. His narration is amazing, portraying the characters, giving each their own voice and personality.
🎧audiobookobsessionreviewer🎧

Pedal to the Metal

Enjoyed the start to this new series, Stephanie Nicole is a new author to me but I look forward to reading/listening to more from her.
#audiobookobsessionreviewer

First book from this author I listen to or read. I was completely enthralled will this book. I love all the different emotions that i felt as I listened. Great storyline

Londynn is from a rich family and is treated horribly. Jagger is trying to deal with the loss of his unborn child and fiancee, he's been gone from home for a while and is back to  help run the family business. When they meet its a attraction they both fight.  Will these two stop fighting and give into love? Will these two get the HEA they deserve?

THE HERO KILLED IT FOR ME

All I can say is that our “hero” was a whiny, insecure wimp who kept emotionally abusing the heroine for most of the book.

Both main characters had lots of emotional baggage, but in my view the heroine handled them better, and at least she tried to learn from her mistakes while the hero kept repeating them.

This story has mostly positive feedback and that is why I decided to listen to it, but it was too frustrating to enjoy it, and hard to get through it.

The ending was rushed in a less than satisfying epilogue.

I would not recommend it, but as so many people have liked it, don’t let my opinion stop you from listening. This story was just not for me.

I was so excited about this audio book. I am a huge fan of this series. The James Brothers are my favorite. This is book one of the series. This is the story of Jagger and London. This story shows it doesn't matter where you come from. Love is love. I love Jagger. He is heartbroken from a tragedy years ago. London is trapped in a world that makes her miserable. They are exactly what each other needs. They just need to fight against others who don't want them together and also against their own self doubt. The narrator Bob Dunsworth did a great job. His voice was the right amount of raspy and it was definitely James Brothers material. The only issue I had with this audio book was there was a missing chapter. Even though it is an important chapter, it doesn't take away the magic from this story. I suggest reading this book and then listening. Trust me it is a different experience in audio book. I loved listening to this story come alive. I can't wait for more in this series to be experienced in my ears.

A good story at finding love again. He lost his the love of his life and ran. He meets London. Their romance was hit or miss at time. I wanted to scream at times to get over the issues already.

Bob did a great job narrating.

This is my first story narrated by Bob Dunsworth, but it will not be my last. The story is angsty, and the characters are multi dimensional. The side characters are fun to get to know and I can't wait to listen to more in the series.

So much more to come I hope

I really hope that we get to see more from these characters. I feel like they all have their stories to tell. Really enjoyable. Great narration from Bob.
#audiobookobsessionreviewer