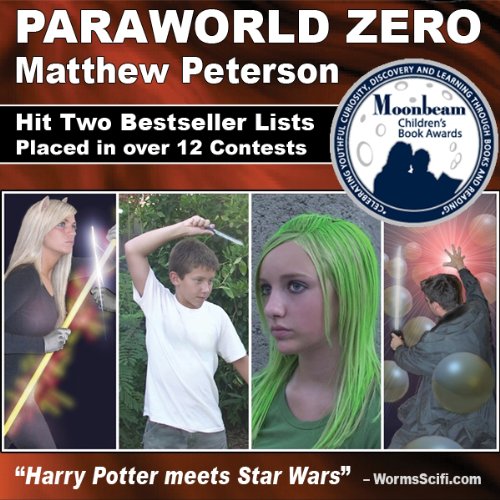 Simon Kent is just an ordinary teenager trying to cope with the loss of his parents and the bullies at school . . . or so he thinks. After meeting an outspoken girl with strange hair that changes colors with her mood, he is swept into a futuristic world filled with dragonlike creatures, vast technology, and enslaved giants.

But Simon also stumbles upon a secret: He can perform magic in this parallel world! While fighting mystical creatures, unraveling an ancient mystery, and even experiencing his first kiss, Simon discovers that he, an outsider from Earth, is the only person who can save the high-tech planet from an impending doom.

Parallel to Simon's adventures is a mystery involving a catlike spy and a magical swordsman who both struggle to maintain peace among the paraworlds. But evil lurks in unexpected places, and few people can be trusted. Their paths ultimately lead them to Simon: the one boy who might be able to prevent the biggest assassination attempt in the known paraverse.

It's a great story. Great idea. It's a real mindbender for the imagination.

Character Naration is superb. Great voices for all the characters.

Story narration, however, was annoying. The writer and his wife(?) it seems double teamed the narration. Matthew is great at character voices, but his narrator's voice fits more with young childrens books (like Peter Pan or Mother Goose). He does not narrate action adventure adolecent sci-fi well at all. His voice is too gentle, soft and bordering effeminate. It sounded like he was reading to a 3 year old - which really ruined all of the action and fight scenes.

The word usage for the book was probably better fitting for English accent narrating or a hard female voice (like Alicia's Peterson's voice).

Alicia's voice is great. It is my opinion that the book needs to be re-narrated with Alicia's voice as the main narrator, with Matthew purely doing male character voices. I think this is the key to putting the book over the top.

Cover art is a little to "back-yard camera with the kids and hair dye".

Tweeners will thoroughly enjoy the audio recording of Paraworld Zero by Matthew and Alicia Peterson. My kids, already loyal Paraworld fans, delighted in hearing their favorite characters come to life. The story is chalk-full of humor and character which will keep young listeners captivated until the surprise ending. We can&#8217;t wait to see what Simon will do next!

I really enjoyed this book. There was a similiar feel to Harry Potter but I thought the plot was even better in this book. Every time I was in the car my kids wouldn't let us listen to anything else. I hear Book 2 is in the process of being written. We can't wait.

More Than I Expected

A friend referred Paraworld Zero to me, and I was at first skeptical, but after I got into it, I could see the gold in this debut novel. The author of the book and narrator of the audio book, Matthew Peterson, has a future ahead of him... if he can get a larger publisher to back him up. Heck, after reading/listening to this young adult novel, I would love to see a larger company do it justice with a better cover and even a movie adaptation. The actual writing is excellent, though, and the narration of the audio book is above average. I was startled to hear multiple narrators, but I got used to it and discovered that it helped in the overall production. It ends on a great cliffhanger that makes you want to read the next one. I also like how everything came together at the end. It had some mystery, a little romance, and a lot of strange creatures. Kids will like this one.

I think this is the type of book you either love or dismiss, depending on your personality and age. I know the intended audience (ages 8 - 16) will love this. For me as an adult, I absolutely loved it as well. But that's because I enjoy a good story with interesting characters. This is not a serious book, though there are a couple of serious moments. The mystery in Paraworld Zero was just enough to keep me guessing. I wish there was a little more romance, but the characters are fairly young (12 through 14), so I understand why the romantic aspects were watered down. There better be more romance in the sequel! I was hoping to see Simon at the magical school, but as it turns out, that'll be in the next book. I'm looking forward to it.

As for the narration, I actually enjoyed the funny and peculiar voices. They were well done and kept me entertained. The prolog is awfully serious, but it lightens up considerably after that. Highly recommended.

This book isn't just for the tweens - it's for all ages! I know an intellectual 50 year old who couldn't put it down - stayed up all night reading this book! Once you're into it, it's captivating! Great story, nice and clean in language, and a better option for everyone who enjoys a good book without having to read junk language. Matthew has certainly got a talent for writing and we who have read it are anxiously awaiting the 2nd book! Mary

This book is awesome! If you like Star Wars, Harry Potter, and other science fiction books, this is the one to read. I am going to get the audible version. I would definitely recommend this book!!!! Loved it loved it loved it!!!!!

I found this book by accident and fell in love with the story and characters. My children have listened to it several times. I cannot wait to see what happens in the next installment. The narration is smooth and the story is filled with impressive creativity, and the ending is simply divine. It might be too intense for smaller children, but if they are mature enough to read Harry Potter and Eragon, then they could also read Paraworld Zero. Do not miss this one.

I devour everything Harry Potter, so when I heard the phrase "Harry Potter meets Star Wars" I had to pick this one up. Paraworld Zero is not your typical Harry Potter-like book. The story has a lot of science fiction and fantasy in it, so I guess you could call it "Harry Potter in Space," though space is not really the word for it. The characters travel through a thing called the parastream, which is like a special form of outer space that allows you to move quickly from parallel world to parallel world. The idea is intriguing, and the author makes it simple to understand. Simon Kent is now my favorite 12-year-old magician. He gets into the most precarious situations. Oh, and the narration is top-notch.

This is the first audiobook that I've ever purchased where it was just too painful to finish. The author should stick to writing, he's an amateurish narrator and wrecks his own book by his sighing, overwrought voice. I'm shocked that any publisher/producer would have allowed him to narrate his own book.

I'll listen to other books by this author if they use a professional narrator.