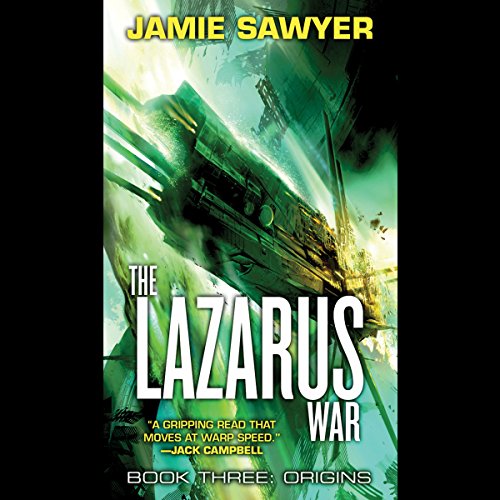 By: Jamie Sawyer
Narrated by: Jeff Harding
Try for $0.00

For someone who has died and come back as many times as Conrad Harris, the nickname Lazarus is well deserved. His elite military teams are specialists in death - running suicide missions in simulant bodies to combat the alien race known as the Krell.

But now the Krell Empire has wreaked such devastation that military command is desperate for a new strategy. And Harris and his team are being sent on a mission that could finally turn the tide of the war.

"A gripping read that moves at warp speed." (Jack Campbell)
"Hyper-speed entertainment from a new master of science fiction!" (William C. Dietz)
"This novel is fast-paced and stimulating, grabbing the reader at the beginning and never letting go." ( Booklist)

What listeners say about Origins

Does not know how to say common acronyms

I have been in the aviation side of the military for nine years. The "heads up display" is pronounced hud not said H-U-D. Petty review maybe but that bugged me for the last three books.

One of my favorite Scifi series to listen to! The Perfomance is just stunning! I couldn't help but listen to this ever chance I could get. It was truly a great book and I highly recommend it.

Loved it! I will definitely recommend and re-read the series! Cannot go wrong with this series.

great all around. don't miss this one.

cool tech. all around well done.

looking forward to another book.