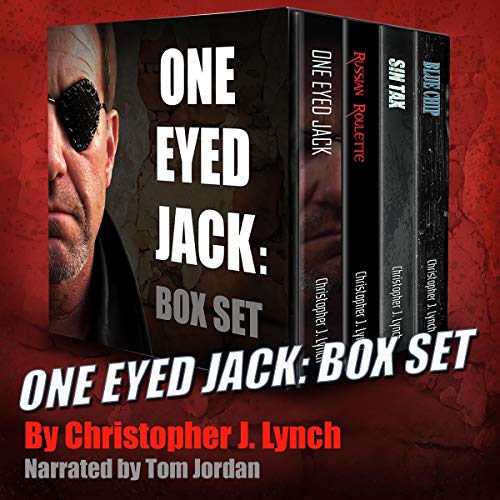 By: Christopher J. Lynch
Narrated by: Tom Jordan
Try for $0.00

A 2013 Shamus Award Finalist, and a 2014 Writer's Digest Honorable Mention for Genre Fiction

A judge for the 22nd Annual Writer’s Digest Self-Published Book Awards said, "In One-Eyed Jack, author Christopher J. Lynch has created a multifaceted main character who will instantly grip readers from the moment he steps onto the stage. What I found interesting was how I both liked and disliked this character at the same time; this is something I've rarely experienced in my many years of reading fiction. This is definitely a book you won't be able to put down."

John Sharp, a.k.a. One Eyed Jack, is a man on the lookout for people just like you and me. And as blackmailers go, he’s as professional as they come. He’s a full-time snoop, but he’s not for hire - he’s on the hunt. His days consist of discovering, documenting, contacting and then collecting from his various targets. And that target could be you.

Fancy yourself a religious man who attends church every Sunday, but who has a propensity for prostitutes the other six days of the week? Don’t worry; the congregation will never know as long as you keep tithing into Jack’s collection plate. He just considers it a “Sin Tax”. Got a shady lawyer pushing a bogus personal injury suit through the courts for you? Don’t worry, you’ll get your settlement - as long as Jack gets his cut. An extramarital affair with your secretary? You guessed it: Pay the piper.

Think of him as a spider that takes nest in a web of your own making. Your lies and deceit and every other type of illicit behavior you hope to keep quiet are the sticky bonds that he traps you with. But he isn’t a blood sucker, he’s just a man who knows how to keep a secret - for a price.

This box set consists of some of Jack’s more notable adventures, from rescuing a woman trapped in a case of double blackmail, to outrunning Russian mobsters trying to kill him, to exposing crooked evangelists as well as doping athletes.

So sit back and enjoy the ride, and be thankful it’s not you...at least not yet.

What listeners say about One Eyed Jack: Box Set

Don’t pass this series up! We need Book 5!

Secrets, lies, deception. I thought Victor the Assassin was an exceptional series. Well now, meet One Eyed Jack! Brilliant series! Christopher J. Lynch’s “One-Eyed Jack” kicks off with a solid delivery and a voice as smooth as silk by superb narrator Tom Jordan, he continues to charm us with his addictive appeal. Jordan’s pitch-perfect, sexy and gallant narration, along with some humor sprinkled in, leads us on an adventure as we meet some dangerous and quirky characters. John “One-Eyed Jack” Sharp is a blackmailer with class, loyalty and allure. So many twists and turns, it had my head spinning. Great jaw-dropping moments. Jack had me hooked from the beginning. In Book 2, “Russian Roulette,” Jack continues as he is on the track of some nefarious characters and cutthroat Russians out for blood. The entire series is highly recommended! Well worth a credit for 22-plus hours of entertainment. I want more “One Eyed Jack” adventures. I will be checking on a regular basis. Epic I say, EPIC EPIC EPIC!
Make sure you catch the very informative interview and conversation with brilliant author Lynch following the fourth book.
👏✍🏻🌟🌟🌟🌟🌟✍🏻👏🌟🌟🌟🌟🌟✍🏻👏🌟🌟🌟🌟🌟✍🏻👏

Would be much better without problematic themes

The stories themselves are good-not-great 21st Century noir crime stories with a tough-guy antihero protagonist. The performance is okay. And I like that they didn't get a stereotypical baritone tough-guy voice.

In book 1, the Asian-American girlfriend (who is an otherwise non-character) of Jack is blatantly referred to as "geisha" and "yellow fever". In book 2, a transgender (non-)character is repeatedly misgendered, referred to by the T-slur, and being blackmailed for their identity (and put in the same category as adultery, sports drugs, and insurance fraud).

While it's understandable that the author is going for a pulpy film-noir feel, it is highly implausible that 30-something middle-class professionals living in LA will talk like this.

Another strange habit the author has is elaborately describing real-life LA locations that have nothing to do with the plot and feel like page fillers. None of the above is a deal-breaker. But they break immersion. And suggests a lack of editing,