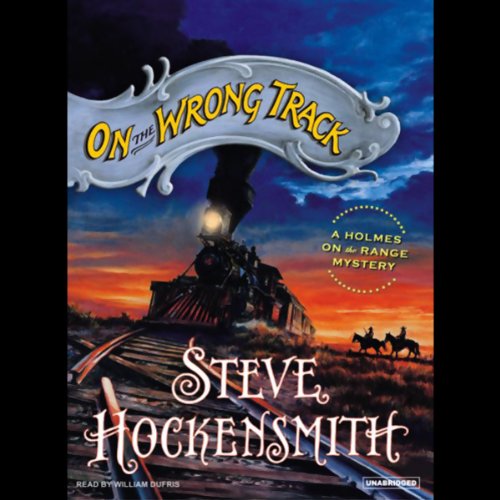 On the Wrong Track

By: Steve Hockensmith
Narrated by: William Dufris
Try for $0.00

Gustav "Old Red" Amlingmeyer is an old-fashioned kind of guy: He prefers a long trail ride even when a train ticket can get him where he's going in one-tenth the time. So when it's Old Red who insists on guarding the Pacific Express, despite a generations-old family distrust of the farm stealin', cattle-killin', money-grubbing' railroads, Big Red is flummoxed. But as usual, he'll follow his ornery brother just about anywhere.

Trapped on a thousand tons of steam-driven steel, Old Red and Big Red find themselves riding with a crafty gang of outlaws, a baggage car jam-packed with secrets, and a killer hidden among the colorful passengers. Filled with all the wit, flavor, humor, and suspense that made Holmes on the Range such a critical hit, On the Wrong Tack will have you rushing to the station!

"Hilarious." (Publishers Weekly)
"As a lively Holmes takeoff, as an inventive melding of mystery and western genres, and as a new source of damn good reading, this series demands attention." (Booklist)

What listeners say about On the Wrong Track

A western, amystery and Sherlock Holme all in one book. I fervently hope there is another book to come. Read this book if you like any of the above.

My favorite so far

This is my favorite in the series so far. Having all the suspects and witnesses stuck on a train makes things a bit more tense and dramatic. I agree with other reviewers that the language is a bit strong, which you'd expect from a couple of un-refined cow hands, and the narration is too exagerated, but the charactrers and setting are so much fun and the story is well told that I didn't mind. If you don't like curse words, though, keep looking. (The 'Her Royal Spyness' series by Reys Bowen is quite good with no bad words.)

First, I loved this book, but I LOVE this narrator! I am a railroad fan and any book involving trains, the old west, and is a mystery also is going to have my interest. And any book narrated by William Dufris - I buy! The guy has a great voice and it works absolutely perfect with Hockensmith's Holmes on the Range series. If you don't believe me, listen to a sample of the audio-book read by this guy and you'll see what I mean.

Good book with a bit off narration

I enjoyed the characters, plot, twists and detials in the book, but found myself often distracted by the narration, which smacked of cartoonish qualities and undigestable speech for characters.

For example, Big Red is a large, strong man more than willing to mix it up with several bad guys at a time, yet his "voice" is squeaky, excited and over exaggerated. Its like a Clint Eastwood guy talking with an Urkel accent.

Great modern western, mixed with Sherlock Holmes. Good for a laugh and a head scratching mystery.

I like these books very much and would rate them 5 stars, but the liberal use of vulgar language is a real put off.
I know many will say that "that is the way people talk" and unfortunatly it's true. That dosen't make me like it.
These would be excellant family books, good plot twists, lots of humor and action. But because of the fowel mouthed characters, I wont let my family hear them. I had forgotten how bad they were when I bought this second one. Will not buy any more by this author