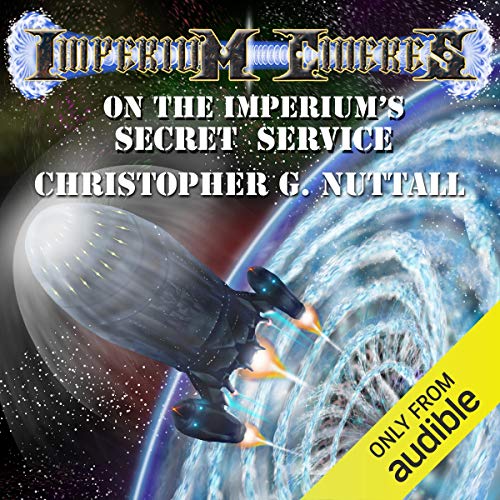 On the Imperium's Secret Service

By: Christopher G. Nuttall
Narrated by: Genvieve Bevier
Try for $0.00

The Imperium: a million worlds, trillions upon trillions of humans and aliens, an empire that dominates half the galaxy... an empire that is falling into chaos, revolution and civil war. Only a handful of people are struggling to keep the Imperium together, knowing that the brutality of its rule is infinitively preferable to the chaos of its fall. This is their story. Mariko and her sister were independent shippers and ace pilots, until they ran afoul of the law on a minor planet and ended up jailed and enslaved. Their new owner, Lord Fitz, seems to be nothing more than another harmless aristocrat with more money than sense - and besides, at least they can keep flying spacecraft. But Fitz isn't all he seems. He works for Imperial Intelligence, attempting to track down and destroy the Secessionist Movement before it launches a plan that threatens the very heart of the Imperium - and Mariko and her sister have just become his latest tools. But as they are drawn deeper into the seedy underside of the Imperium, one question comes to dominate their minds... Does the Imperium even deserve to survive?

What listeners say about On the Imperium's Secret Service

Struggled to finish this. Just not at the level I wanted in both characters and story line.

Would you listen to On the Imperium's Secret Service again? Why?

I would listen to this book again. It has strong characters and an intriguing story.

What other book might you compare On the Imperium's Secret Service to and why?

I would compare this book lightly with "Angel in the Whirlwind", also by Christopher. A strong, seemingly overachieving female character that you want to rally around.

Which character – as performed by Genvieve Bevier – was your favorite?

Mariko, although it took me awhile to get used to Genevieve's excessive breathiness and dynamic fall offs at the ends of sentences. I still enjoyed it.

No extreme reaction but thoroughly enjoyed.

I am hopeful there will be more of "On the Imperium's Secret Service" books offered as audiobooks!!

When a story starts out with men groping a young partially naked girl and pulling out his manhood for a another caged young girl to have oral sex with....... I know this this was not for me.

I like Nuttal's stuff, especially his Stocker's Stalkers in The Empire's Corps series. This book takes place after Han but not by much. The Child Roland is still presumably the Emperor, but nobody really knows. The main characters in this book are the Japanese sisters Mariko and Mei. They are excellent pilots but naive otherwise, and get into trouble and subsequently sold as slaves to a sexual sadist. But before they can be violated, they are bought by someone else who proves to be much more gentlemanly. They are his pilots, but then join him in his secret missions.

The sci-fi aspects of the story are good. You've got worm holes, aliens, insurrection and treachery. What loses this book a star is the way the girls behave. Mei, the younger sister, immediately develops a crush on their new owner but is just fine with it when Mariko gets the man. This isn't really a spoiler since anyone would see it coming from the point they meet.

There is a lot of conversation about the treatment of aliens. It seemed strange that no aliens were ever mentioned in The Empire's Corps books. This book leads me to think that Stocker should have had more trouble with them.

But as a precursor to the collapse of the Empire, this gives us another interesting side of the universe, and we can see some different events happening than what Stocker sees. It is interesting, but not as satisfying as the Marines.

The narration is okay, but not great. A few times, she forgets to give Mariko her voice.

I would like to see more of this universe, but hope it will be more sci-fi than romance.

This is book one of a new series by Nuttall entitled Imperium Cicernus. The story begins with Maiko and her sister May stuck in prison. They ended up in prison because Maiko refused the forceful advances from the son of a powerful man with her knee. There are awaiting auction, the highest bidder will own them. Along comes Fitz, a very wealthy man. He apparently bought them because he needed a pilot and both girls are pilots.

The name of his ship is The Bruce Wayne. It turns out he is an agent with the Imperium’s Secret Service and he’s on the trail of a conspiracy that could bring the Imperium down.

The plot is good and the character develop is better than the first book of Nuttall’s other series. May stayed in the background so I am not sure what Nuttall has in store for her in future books. She is off to be in the worm hole engineers and Maiko is now an agent in the secret service. The story is easy to read and may have potential; there is lots of action and suspense to keep one reading. Nuttall seems to be improving as a writer. Genève Bevier narrated the book.

What was most disappointing about Christopher G. Nuttall’s story?

The day is saved by Deus Ex Technobabble. The villain is a moron. The plot is practically a paint by numbers spy cliche.

Would you consider the audio edition of On the Imperium's Secret Service to be better than the print version?

Yes, I don't have time to sit down and read a print version so I rely on Audiobooks. This was an outstanding read and look forward to book two.

All three were equal.

Very good she kept me interested through out the complete book.

It was just an outstanding read with a great ending.

The story itself was good. I would like to read more in this series, and over the past several years, I have read this book a few times.
Hopefully though, the narrator is changed for future books. The voice, Intonation, and diction she uses for the main male character is ridiculous.
The book editing could have been substantially better. Several incorrect words, an important figure specified very carefully as 80% that is later listed as 70%, The wrong character names are used here and there…
The audio editing is better, although there is one glaring case of a correction that should have been edited out, during the first third of the book.

First and foremost - Audible LIES - this has to be Narrated by: Jennifer Van Dyck!!!
Now that is out of the way:

The first ten minutes is a real put off - one other reviewer could not get past, gave it one star. First part is two younger girls who made a bad move, are impassioned, and discussion ensues involving oral sex. Once you get past that part the book really picks up. Flip side - character, interdpendency is quickly developed, and early on you care about their welfare.

There are recurring themes of indentured servitude (slavery) early on w/ the seediness that entails, and they do fade as the book progresses. They are important to character development, do feed the "semi-romance" and space "opera".

Generally a fun read w/ some very early ickyness that ends up feeding the story and propelling the characters onward.

Fairly good, if somewhat predictable., but a story that's predictably entertaining is handy to have around. Entertainment is, after all, why I read and listen. :-)

Fun listen. Although unlike other books from CN

In the grim dark future the aristocracy has risen!

A fun listen, which was well performed by Genvieve, although I couldn't quite believe it when the end credits rolled and I realised the author. Besides being set in space, pretty much nothing like CNs Ark Royal series. That's not to say however that I wouldn't recommend.
It's (at least to me) a very unique story, which in terms of genre I think would have to be described at times as action/adventure/romcom.

Would recommend as a fun sci-fi adventure.

The story was ok although it couldn't seem to decide who were goodies and baddies. The characters are somewhat two dimensional.
I didn't enjoy the narrator, she fires sentences at you and is awful at speaking mail parts.