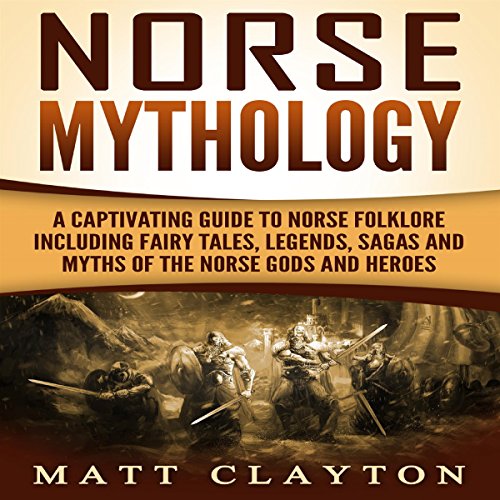 Norse Mythology: A Captivating Guide to Norse Folklore Including Fairy Tales, Legends, Sagas and Myths of the Norse Gods and Heroes

By: Matt Clayton
Narrated by: Dryw McArthur
Try for $0.00

Explore captivating myths of the Norse Gods and heroes

The stories from Norse mythology linger in our culture today. Four days of our week are named after members of the Norse pantheon (Tyr, Woden [Odin], Thor, and Frigg). Wagner’s Ring Cycle has kept one version of one of the great Norse stories alive in the minds of music lovers. Fans of modern fantasy will find many echoes of the Norse tales as well. Something in these old and puzzling stories still has the power to move and unsettle us and to inspire new acts of creation.

This audiobook will give you a brief introduction to some of the best-known myths found in the primary sources. This audiobook includes a glossary of names in case you need help keeping track of a rather large cast of characters. Enjoy your explorations!

Within this audiobook, you'll find the following Norse myths and topics covered:

Get the audiobook now and learn more about Norse mythology!

What listeners say about Norse Mythology: A Captivating Guide to Norse Folklore Including Fairy Tales, Legends, Sagas and Myths of the Norse Gods and Heroes

Norse mythology is incredibly interesting and this book does a good job at presenting these tales. My biggest gripe lies with the narrator. He can be pretty dry at times. His biggest issue is the way he says certain names. The way he says Mjölnir, Thor's hammer, makes me think he never read the word before and came up with his own way. But that might be my fault as a Swede to expect a more Scandinavian way of saying these names.

The book is great jumps story to story kinda randomly but you can keep up .

Vali, god of being left out of this tale...

Far too many characters whom I've heard named in other sources, are referred to as "Him, that did that," and as one listening in hopes of learning, it's annoying.
I enjoyed the info given between chapters to quote different versions of the stories, but sorely disappointed that even with this attention to detail, the tale of Odin, Rindr and Vali are completely ignored, and enough details of many stories simply left out, leaving this version of them hollow when compared to other versions I've heard and read.

Good for mythology fans -- but a bit too scholarly

This is an accurate retelling of the norse mythology. However, being accurate, it lacks many of the literary flourishes found in other retellings. But still a good telling.

A small encyclopedia of Norse mythology. The beginning sections are a nice overview of Norse history and beliefs.

This book it's perfect for children and those new to the Norse mythos. Simply enough to engage young listeners.

It is good to know about ancient stories. This book taught me a lot about Norse Mythology. I enjoyed and entertained while listening.

Really solid foundation of the old tales. Perfect for kids, I'd go as far to say it's good enough to be an effective book for adults to learn a brief but proper understanding of norse myth before launching in to the deep stuff.

Great introduction to the subject.

This would not be the ultimate reference for a serious and dedicated student of the topic, but is an excellent book for someone either new to the topic or at least only moderately knowledgeable. The author accomplishes exactly what he set out to do.

Well, I found that this is a great reference and very listenable and highly recommend it to anyone who wants in-depth knowledge of this fascinating subject matter. Recommended!


A novelization of the adventures of the Norse gods and goddesses, this book will be most enjoyed by those already familiar with Norse mythology

I love this book a lot! Thanks so much to Matt for his unique and amazing way of storytelling on the subject of Norse Mythology. What enjoyable stories.

The love of the subject is apparent throughout the stories.Encounter the Norse Gods as they venture throughout their world. Relate these tales to modern life and learn lessons that only the Gods can teach. If you are an avid fan of mythology or just venturing into this area, Matt's book is a great read for you.