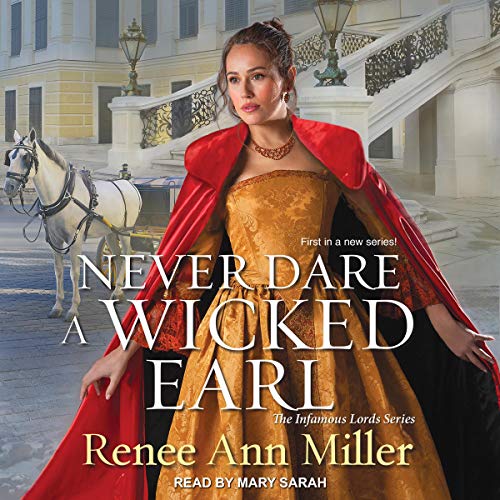 By: Renee Ann Miller
Narrated by: Mary Sarah
Try for $0.00

They are the infamous lords, unrepentant rogues whose bad behavior makes for good gossip among the ton. But these sexy scoundrels have stories no one knows. And it takes a special touch to reveal the true hearts behind their devilish disguises....

Known as a brazen philanderer, Hayden Milton, Earl of Westfield, is almost done in by a vengeful mistress who aims a gun at a rather essential part of his anatomy - but ends up wounding his thigh instead. Recuperating in his London townhouse, Hayden is confronted by his new medical attendant. Sophia Camden intrigues him, for behind her starched uniform is an enticing beauty better suited for bedding than dispensing salves and changing bandages.

Unshaken by his arrogance, not to mention impropriety, Sophia offers Hayden a dare: Allow her 10 days to prove her competency. If she resigns in exasperation like her two predecessors, she will be beholden to this wicked seducer. As a battle of wills begins, Sophia finds herself distracted by the earl's muscular physique...and discovers that the man within longs only for a second chance to love.

What listeners say about Never Dare a Wicked Earl

The story started out Ok but fizzled out halfway. The book just felt like it was going through the motions and I really stopped caring what happened before too long. I hate misunderstandings as the main source of conflict and that was a problem here. And the narrator.. I don't mean to insult them personally but their speaking style is the most annoying I've tried to listen to. High pitched and breathy with odd pauses. It sounds like they drop their consonants or maybe even there was an issue during audio editing that cut off some of the range. Quite bizarre and ruined the whole thing.

I liked a lot

I am a fan of Mary Sarah...so I approve her narration. I know she may not be everyone's cup of tea, but I appreciate her dark soft sexy voice that she uses for the men. This is my first book by Renee Ann Miller. I enjoyed it and am looking forward to reading more from her. Hopefully all narrated by Mary Sarah.

This is a terrific book. Highly recommend.

very likeable characters who are open, shy, guilty due to being hurt and very needy before they learned to trust.

Renee Ann Miller is a new author for me. I liked this book very much. It has secrets, a strong heroine and lovable characters. I will watch for other books by this author.

Entire story was completely and utterly ruined by the incredibly incorrect accent used by Mary Sarah who is evidently an American with no ear for language. What a pity that an inventive plot line and good characters should be let down by such poor linguistic effects. As a TEFL teacher I am well used to discerning the meaning of my beloved mother tongue when mispronounced by pupils from numerous countries. Ms. Sarah’s repeated mistakes, her laughable vowel sounds and strangled pronunciation reduced me to overt giggles ultimately. My greatest fear is for listeners in North America who may well give up long before the novel’s end simply because they cannot understand a word! Unfortunately there is no option for zero stars for performance.

The story is ok but would be greatly improved by a different narrator.

Half the time I couldn't make out which character is talking, due to the breithyness of her voice.

I will be returning asap.