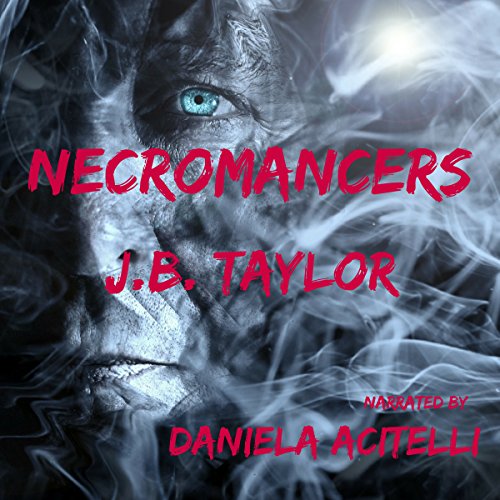 By: J.B. Taylor
Narrated by: Daniela Acitelli
Free with a 30-day trial

Christine is an actress, a breakout star in truth. She never believed in wizards. She never knew of the darkest wizard ever to have existed: Mortem. But Mortem knows of her. Christine is the sole survivor of his assassination of two wizarding journalists that resulted in a destroyed cafe and many dead civilians. Fearful her rising celebrity will bring his great plan to take over the wizarding world into the consciousness of the public, he seeks her out, and Christine is forced on the run.

What listeners say about Necromancers

Not a bad start

I thought this was a decent start to a story. The story ends quickly so it feels more like the preface to the full story. I had to listen to it a few times because I got lost and then it ended; but, as I listened to it again I started to enjoy the story and the narrator more. I really enjoyed the part where the protagonist complains about her outfit after leaving the hospital. Both the lines and the narrator's voice were spot on in my mind.

I received this book free of charge for an honest review. I honestly don't remember much about this book, it didn't annoy me enough not to listen but didn't really have me plugged in. maybe catching a sequel will be more intriguing I know there were a few things I'd like have followed up on I'm sure the character has more to her than appears

Take it or Leave it

I got this book from audiobook boom. This was a quick story less that an hour and it left a lot to be desired.

Perryton School of Witchcraft and Wizardry

Warning: there is some language, so it's not for children.

I think the publisher's summary is more than enough to summarize the short story, so I won't touch much on plot. Hearing Agent Piercing say he got D in transfiguration at Perryton School of Witchcraft and Wizardry made me think it was a harry potter fanfic. Of course, the mediocre students always go into government, so no surprise there! I thought it a little weird the author calls them necromancers when they don't seem to raise the dead. I was hoping for more on that point in the story, but it's really more focused on the warlocks (or are they wizards?).

I thought the narrator was ok, but nothing memorable. She didn't really convince me that Agent Piercing was full of confidence, or that Christine was hysterical after the fight.

Short story in a potterish world

Great little story set in modern day world mixed with a world of magic with evil necromancers on the loose. I very much enjoyed it and would like to hear more stories set in this world.I was voluntarily provided this free review copy audiobook by the author, narrator, or publisher.

BOOK REVIEW.....
This story was so lame. The characters were beyond stupid. Over all the book is just awful in every way it could be.

NARRATOR REVIEW....
The narrator was so bad, Bad bad bad.

IMHO, this is the first chapter of a book, not a complete short story. After the bombing, the heroine wakes up in the hospital. A strange man tells her she's in danger, and suddenly she's on the run in her hospital gown. She survives an attack by a supposed necromancer, then...nothing. I can't recommend it.

This story had promise but ultimately felt a bit goofy to me. The narrator really didn't help. She was stiff and artificial. The overall effect was underwhelming.