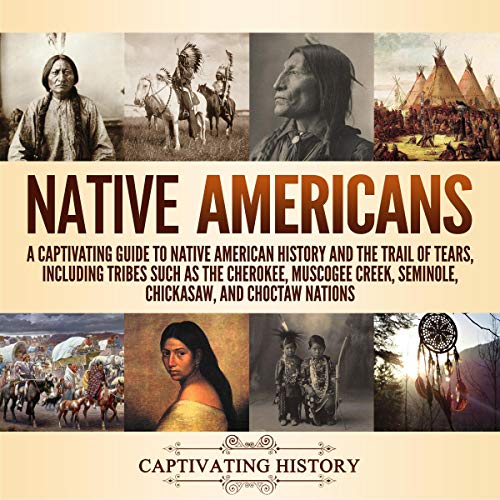 Native Americans: A Captivating Guide to Native American History and the Trail of Tears, Including Tribes Such as the Cherokee, Muscogee Creek, Seminole, Chickasaw, and Choctaw Nations

By: Captivating History
Narrated by: Duke Holm,Andrew Buzzeo
Try for $0.00

If you want to discover Native American history, then keep reading....

“History is written by the victors,” said the victor Winston Churchill. But does that compromise the truth of what really happened? In this new bundle audiobook from Captivating History, you will discover the shocking and controversial history of the Native Americans.

Part one of this audiobook include topics such as:

The following topics will be covered in part two of this audiobook:

Listen to this audiobook now to learn more about Native American history!

What listeners say about Native Americans: A Captivating Guide to Native American History and the Trail of Tears, Including Tribes Such as the Cherokee, Muscogee Creek, Seminole, Chickasaw, and Choctaw Nations

The author has decided that science is a European import, and therefore scientific facts about the origin of Native Americans are to be ignored in favor of ancient mythology and oral traditions. The DNA evidence is incontrovertible: Native Americans are descended from Northeast Asia. You can do all the special pleading in the world, it won't change the facts.

This book is rubbish. Returning it for a refund.

not a historical text

the writing is amateurish - reads like a high school paper more than a learned history.

Nothing contributed by this author of any original thought. 8th grade reading level. Just my opinion.

I was hoping for a balanced history of Native Americans, both the good and bad. But this was like listening to Fox News talk about the Democrats, or MSNBC talk about the Republicans. The book was so distractingly biased that I became a bit skeptical of the "facts" that were presented and wondered what contradicting facts were deliberately left out or glossed over.

Only get half the story.

Half finished sentences, more of synapses then a whole story, would not recommend this book

This book offers a readable overview of the major themes in American Indian history. Although there are many things one could find to fault in this book, there is no better overview.

Numerous scholarly sources maintain that the number of Native Americans killed as a result of colonization and later through displacement and internment EXCEEDS the number of people killed during the Holocaust. So get some perspective here people.

A very complete history of the Native Americans and their interaction with the Europeans they encountered over the past 400 years. It is interesting but slow going.

This book is creatively distilled, well evidenced, and convincing. It presents a totally different view of history that is of critical importance for all of us. I highly recommend this book for people of all ages.

I was happily listening to the opening chapters and the author starts talking about how native Americans arriving in North America - after saying the usual science doesn’t really know - he starts using language like “Europeans stealing the land”. I don’t want a unreasonable political bias in my history. So this isn’t for me.

An embarrassingly contrived English accent used by the narrator. Not one person has ever crossed my path in England that sounds this way, coupled with the use of US English speaking it was like nails on a chalk board. the narrator constantly digs at Americans to this day, as if the book is a whipping of them and their behaviour, like this book is not for them to read. During the tales he uses the awfully enhanced English droning voice to speak sentences like they were moved "off of the land" and things of a 'doobious' nature. if you're going to use such and awfully put on English accent, and slam Americans please speak in correct English.

it's "moved off the land"
and, " dubious"
cringey performance.


This book is so well researched. I truly feel that the American Indians to this day are the neighbor whose suffering we are ignoring as American citizens.

A very enlightening review of a sad and tragic time in the history of a once beautiful culture of the indigenous people of the North American continent. The earth indeed has wept and will continue to weep for one of humanity's most shameful times.


Although I knew the history in general, the book gave me a good deal of new information.