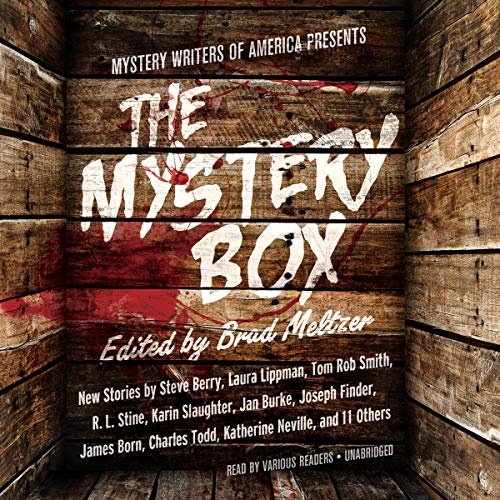 There’s nothing more mysterious than a locked box. Whether it’s a literal strongbox, an empty coffin, the inner workings of a scientist’s mind, or an underground prison cell, there are those who will use any means necessary to unlock the secrets of The Mystery Box.

With this anthology, best-selling author Brad Meltzer introduces 21 original stories from today’s most prominent mystery writers. In Laura Lippman’s "Waco 1982", a young reporter stuck with a seemingly mundane assignment on lost-and-found boxes unwittingly discovers a dark crime. In Joseph Finder’s "Heirloom", a scheming neighbor frightens the new couple on the block with an unnerving tale of buried treasure. In R. L. Stine’s "High Stakes", a man on his honeymoon gets drawn into a bizarre bet involving a coffin, a bet he may pay for with his life.

From the foothills of Mount Fuji to Georgia’s Okefenokee Swamp, from a physics laboratory in wartime Leipzig to an unusual fitness club in Boca Raton, these sometimes terrifying, sometimes funny, and always suspenseful tales will keep you riveted. (The complete list of narrators includes Joe Barrett and Donald Corren.)

"The consistently high quality of the 22 selections will lead many to hope the MWA will sponsor more volumes in this vein." ( Publishers Weekly, starred review of  Mystery Writers of America Presents: The Prosecution Rests)

Good collection of stories using a box as the main interest. Authors delivered as well as narrators.

Not much of a mystery in these stories

If the mysteries had any mystery behind them. The stories were okay, but maybe the focus should have been on fewer but more robust stories.

Would you ever listen to anything by Brad Meltzer (editor) again?

Not one of these collections.

The narrators were okay, the stories just lacked teeth.

If you could play editor, what scene or scenes would you have cut from Mystery Writers of America Presents The Mystery Box?

I would have cut the quantity of stories in half.

I agree with the other reviewers that many of the stories are contrived to fit the box theme. Many are not mysteries. However, I think the theme is interesting, and the collection worth the credit. All are well written and narrated.

The 1st story is my favorite. The Most Private Detective is my next most favorite. A number of others were very interesting as well.
The last one, about the world record, is explicit and raunchy, so beware.

It's hard to rate a mixed bag of stories, since some of them will likely be more to one's liking than others. Such is the case with this book.

Some of the stories are delightfully clever with happy, triumphant endings. Some of them are humorous, almost like long jokes with unexpected punchlines. Some of them are deeply haunting and socially insightful, and some of them stick with you because they are horrible and ugly, like skunk stink. You wish you could scrub them out of your brain, but you will never be able to. Alas, these are the risks we take when we read new authors.

Overall, will you like this book? Parts of it. If you're a cozy mystery fan, this book is probably not for you. These mysteries are not cozy. If you're a noir-fan, you'll like this a bit more. If you're up for a fair bit of mind-twisting, then plunge right in.

Content warning for those who care: Various stories in this book contain extreme profanity, adult content, and troubling themes.

Some stories were surely better than others, but I still enjoyed the book. I especially liked Karen Slaughter, Joseph Finer, S. W. Hubbard and R.L. Stein. Glad I gave it a try!

What made the experience of listening to Mystery Writers of America Presents The Mystery Box the most enjoyable?

The stories are great. Not all of them are equal and some I liked less, but there are so many of them that are excellent and extremely enjoyable to listen to.

A very well narrated group of stories. Performances were generally fun to hear.

If you could rename Mystery Writers of America Presents The Mystery Box, what would you call it?

I still haven't finished all of these wonderful contributions, but most have been very enjoyable. I would encourage any mystery lover to acquire this wonderful collection.

One of the best collections

This was one of the best collections I have read. Normally these collections are 50/50 good and bad. But in this case I would say the good was 60% with 20% of them being excellent.
This is worth the credit.

Would you listen to Mystery Writers of America Presents The Mystery Box again? Why?

Yes, I definitely would listen to this title again. The collection of short storie was the best well rounded collection I have ever heard.

The short story “Remmy Rothstein Toes the Line (annotated)” by Karin Slaughter was by far the most interesting, funny, crazy, impossible to describe short story ever written in my opinion. Your missing out if you pass this one up.

A Collection of Misrepresented and Vacuous Stories

A mystery book with little to no mysteries involved in the process. I would not recommend.

Decent book some stories other nit but over a good book. I liked the different stories ide