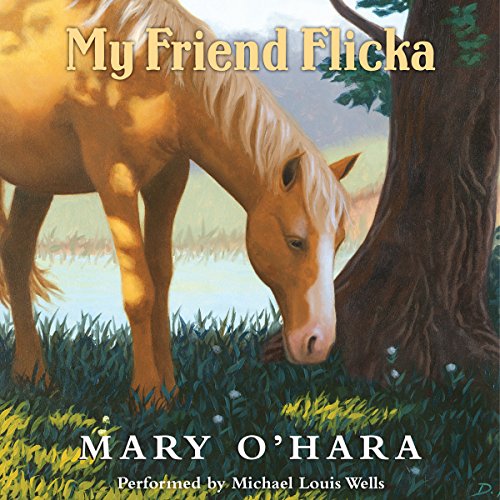 By: Mary O'Hara
Narrated by: Michael Louis Wells
Try for $0.00

It seems Ken can't do anything right. He loses saddle blankets and breaks reins...but then comes the worst news yet: a report card so bad that he has to repeat a grade. How can you tame the dreamy mind of a boy who stares out of the window instead of taking an exam? Enter Flicka, the chestnut filly with a wild spirit. Over the course of one magical summer, both will learn the meaning of responsibility, courage, and, ultimately, friendship.
©1940, 1941, renewed 1968, 1969 Mary O'Hara (P)2005 HarperCollinsPublishers, Inc.
Show more Show less

What listeners say about My Friend Flicka

Better Than Even I Remembered

Why is this only on Audible Kids? Like all classics, this is a complex story with appeal to adults as well - it’s actually an adult novel with simple aspects that appeal to kids. I have re-read it many times at various stages of life. I am near 60 now and found new pleasure, new nuances. PLEASE get Thunderhead and Greengrass of Wyoming, the sequels. I volunteer to read them aloud!

So so amazing my whole family loves this book!! Get! Get! I do recommend. Hope this helps!

I loved this book though it had a slow start. It was worth getting through that.

Great story for a trip to Laramie WY.

This is a VERY long book. But Wyoming is a VERY big state. We enjoyed listening between stops.

This book is Awesomely awesome!!!!

The book is greater than great! Get this book!! You will love it! My friend flika!!!!!😂

I haven't listened to many books on tape, so I had wished there to be a female to read the woman's lines but besides that, it was wonderful to listen to a story I hadn't heard since childhood. it's just as good as I remember. :)

Better Than I Remember

Read as a child, reread as an adult! What a contrast in takes from the horse lover I have been since little and hobby farmer/parent I am now. A great book to listen and read along WITH your horse loving children!

Would you listen to My Friend Flicka again? Why?

Yes - it's one of my favourite stories of all time.

What was one of the most memorable moments of My Friend Flicka?

The whole book, from start to finish, it was as good as the first time I read it.

Would you be willing to try another one of Michael Louis Wells’s performances?

I'd have to think twice about it. He mispronounced the characters' surname, McLaughlin. He got it right about twice but it's how Mary O'Hara refers to the main character's father, so it comes up a lot in the book.

There is a film about the book. Unfortunately, they recently made another movie based on the novel, but I'm yet to see the relativity.

Michael Louis Well doesn't do a bad job, but his mispronunciation of the surname really detracted from his performance.

I loved listening to this book, an excellent story line with fantastic characters. I can't wait to listen to the next part. I would recommend this book for everyone. I learned a whole lot about friendship.