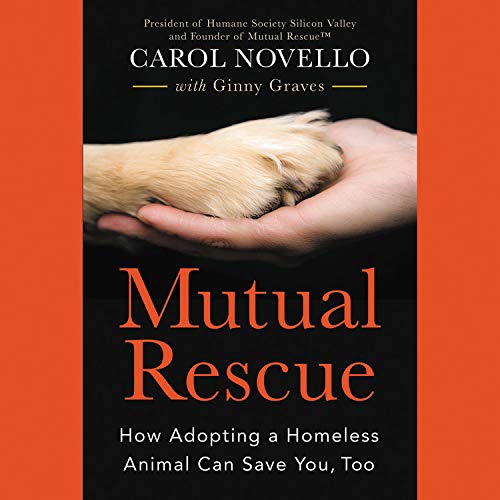 By: Carol Novello
Narrated by: Sarah Mollo-Christensen
Try for $0.00

A moving and scientific look at the curative powers - both physical and mental - of rescuing a shelter animal, by the president of Humane Society Silicon Valley.

Mutual Rescue profiles the transformational impact that shelter pets have on humans, exploring the emotional, physical, and spiritual gifts that rescued animals provide. It explores through anecdote, observation, and scientific research the complexity and depth of the role that pets play in our lives. Every story in the audiobook brings an unrecognized benefit of adopting homeless animals to the forefront of the rescue conversation.

In a nation plagued by illnesses - 16 million adults suffer from depression, 29 million have diabetes, eight million in any given year have PTSD, and nearly 40 percent are obese - rescue pets can help: 60 percent of doctors said they prescribe pet adoption, and a staggering 97 percent believe that pet ownership provides health benefits. For people in chronic emotional, physical, or spiritual pain, adopting an animal can transform, and even save, their lives.

Each story in the audiobook takes a deep dive into one potent aspect of animal adoption, told through the lens of people's personal experiences with their rescued pets and the science that backs up the results. This audiobook will resonate with listeners hungering for stories of healing and redemption.

"The premise put forward by Novello, president of Humane Society Silicon Valley, in her first book is a simple one: rescuing a pet from a shelter helps both the animal and the owner in numerous ways. This collection of anecdotes, bolstered by the requisite statistics and studies, proves her point time and again. Novello opens with the story of how two Parkland School shooting survivors found solace in a pair of rescue dogs, one a mini Australian shepherd trained as a therapy animal, the other a puppy (of an unspecified breed) recently rescued from an abusive home; both were powerfully effective in helping their owners recuperate from trauma. While not all of Novello's accounts are this dramatic, they're equally impactful, variously showing how animals can help owners overcome the loss of a child or the suicide of a loved one, combat mental illness, adopt a healthier lifestyle, and even enhance a child's cognitive and emotional development. A selection of resources, such as volunteering tips for people unable to commit to pet ownership, rounds out the book. It's an impressive and inspiring work guaranteed to spur a visit to a rescue web site or trip to the local Humane Society." (Publisher's Weekly)

What listeners say about Mutual Rescue

Empathy is a muscle; the more you start using it, the stronger it gets—and your mind opens along with it. All of a sudden, that beloved furry companion becomes more than a source of occasional affection, amusement, and constant upkeep. Rather, you start to see, bit by bit, into the emotions that slip under the radar of casual observation. When your pet rabbit hops over to you and licks your face during a nervous breakdown; when your dog barks madly at passerby when your uncle was having a stroke until someone came to help; when your hamster's insatiable curiosity and endless drive shows you new and profound ways to approach life's problems. This book represents all of these things, and more. Highly recommended.