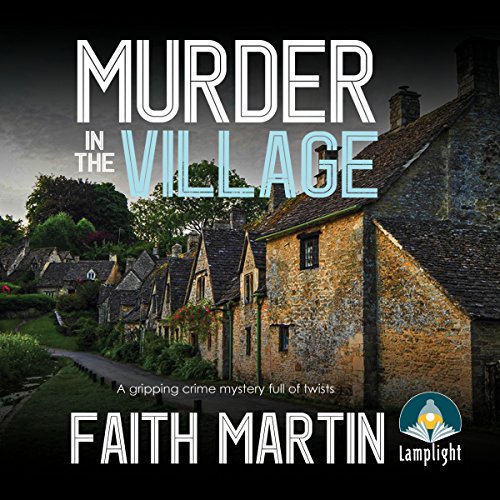 Murder in the Village

By: Faith Martin
Narrated by: Gemma Dawson
Try for $0.00

Looking for a brilliant best-selling murder mystery with a feisty female detective? Then meet DI Hillary Greene, a policewoman struggling to save her career and catch criminals.

A would-be politician is found battered to death in the kitchen of his expensive home in a lovely Oxfordshire village. His wife’s alibi is full of holes, and there’s another woman in the background. And what about his seemingly mild-mannered political rival?

DI Hillary Greene tries to get to the bottom of this perplexing murder. She certainly doesn’t think the prime suspect is as guilty as everyone thinks. Just as she’s about to make a breakthrough, everything is turned upside down by a fatal development in another case she is working on....

Can Hillary find the murderer, and will she survive a brush with one of Oxford’s most dangerous criminals?

Murder in the Village is the fourth in a series of pause-resisting crime thrillers set in Oxfordshire.

What listeners say about Murder in the Village

Another excellent Hilary Green book - I am totally addicted to this series. Great characters, great plot line and great resolution.

There really is no other way to describe the narration of this book. The person sounds disinterested and hurried with only the saving grace being the dialogue sections. The only way I can get through is by slowing down the speed on the app. Shame because I always enjoy the characters and stories of these books.

I’m afraid I’m going to steer clear of Faith Martin’s D I Greene novels for a while. The stories themselves aren’t the issue so much as her excessive use of adverbs and frequent repetition of words, often within a sentence. I can’t believe an editor wouldn’t have picked up on this rather irritating habit.
This story starts with the eponymous “Murder in the Village” - I think the original title of By a Narrow Majority is better- of a prospective Tory candidate, who is almost forgotten for the rest of the book. The bulk of the story is then taken up with a drugs raid gone bad and the ramifications from said raid. I thought the resolution of both the murder and drugs raid a bit trite but preferable to an open ending which is really annoying.
Her protagonists are often no more than thumbnail sketches or stereotypes and as crime fiction is quite a crowded field I shall read more Rankin, Billingham, Slaughter et al for a while..They share a better ear for dialogue and have more fully developed characters.

Brilliant series- great characterisation and thoroughly gripping. Gemma Dawson is a terrific narrator with the right amount of cynicism. Please keep them coming.

This story did not disappoint and I enjoyed performance and story throughout the whole listen.