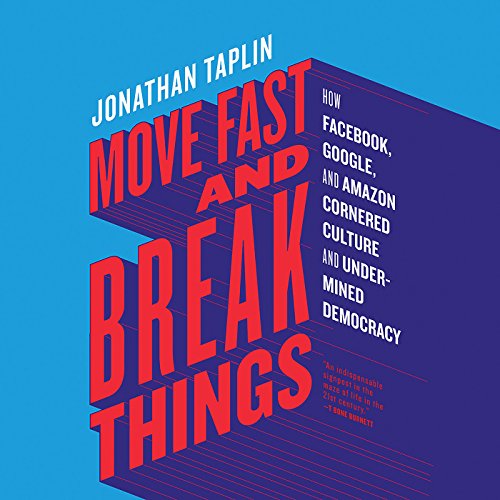 Move Fast and Break Things tells the story of how a small group of libertarian entrepreneurs began in the 1990s to hijack the original decentralized vision of the Internet, in the process creating three monopoly firms - Facebook, Amazon, and Google - that now determine the future of the music, film, television, publishing, and news industries.

Taplin offers a succinct and powerful history of how online life began to be shaped around the values of the men who founded these companies, including Peter Thiel and Larry Page: tolerating piracy of books, music and film while at the same time promoting opaque business practices and subordinating privacy of individual users to create the surveillance marketing monoculture in which we now live.

The enormous profits that have come with this concentration of power tell their own story. Since 2001, newspaper and music revenues have fallen by 70 percent; book publishing, film, and television profits have also fallen dramatically. Revenues at Google in this same period grew from $400 million to $74.5 billion. Google's YouTube today controls 60 percent of the streaming audio business and pays only 11 percent of the streaming audio revenues. More creative content is being consumed than ever before, but less revenue is flowing to creators and owners of the content.

With the reallocation of money to monopoly platforms comes a shift in power. Google, Facebook, and Amazon now enjoy political power on par with Big Oil and Big Pharma, which in part explains how such a tremendous shift in revenues from artists to platforms could have been achieved and why it has gone unchallenged for so long.

The stakes in this story go far beyond the livelihood of any one musician or journalist. As Taplin observes, the fact that more and more Americans receive their news, music, and other forms of entertainment from a small group of companies poses a real threat to democracy. Move Fast and Break Things offers a vital, forward-thinking prescription for how artists can reclaim their audiences using knowledge of the past and a determination to work together. Using his own half-century career as a music and film producer and early pioneer of streaming video online, Taplin offers new ways to think about the design of the World Wide Web and specifically the way we live with the firms that dominate it.

What listeners say about Move Fast and Break Things

I was Moved, Broken and Motivated!

Late to the party to read Jonathan Taplin’s book, but his perspective is knowledgeable, and historical overview considered and scholarly. More than just a romp through the history of how we’ve gotten here, he offers a very intelligent series if ideas that suggest a roadmap home to recapturing some of our personal, private and creative artistic integrity.
Great read and well worth your consideration.

What made the experience of listening to Move Fast and Break Things the most enjoyable?

I saw the author present at a conference and was simply shocked by what he presented.

What was one of the most memorable moments of Move Fast and Break Things?

Learning how much Peter Thiel has had an influence in silicon valley and how many PayPal "freshman" now helm many important Silicon Valley Firms.

Against progress and libertarians.

Propaganda, pure and simple. The author is hell bent on proving how evil libertarians are, and anyone who has a goal of making money (except for artists who in his eyes should still make ungodly amounts). I quit the story when he said, the guys who started PayPal, also made bombs... Every generation laments the changes they see in the next.

The book was amazing, sometimes strayed a bit too far into baby boomer reminiscing through rose-colored glasses, but overall great.
The performance, however, was not so great. The gentleman reading the book sounded as if he had just swallowed a handful of sedatives and then filled his mouth with meatballs. He was difficult to understand at times, and I had to rewind and relisten to certain parts.

Great Points, But he blames libertarians ?

Spoiler alert: this is an anti capitalism anti libertarian book.

If your a libertarian or capitalist you should read this because it's always important to have many perspectives and to refine your thinking process and beliefs.

The author does a beautiful job pointing out the issues with today's technology monopolies and explains how the media and other industries got destroyed by the current model.

However he blames libertarians for most of the problems of the world Today?

I'm not quite sure how he connected the following as the same...

The biggest problem he talks about in the entire book was put into law by bill Clinton yet then he blames the alt right and libertarians for all the problems. This was a new legal precedent put into law by the old industry and the most impactful part of his whole narrative and he brushed it off in one sentence.

The closest answer your going to get to a decentralized and democratized internet is being built by the libertarians.

id love to give micropayments to artists and have programmatic allocation and transparency in corporations and the companies I interact with.

the ideal future the author is requesting is currently being built by libertarians and other people of all beliefs who want to give freedom to people from the tech Bohemiths but it's going to take a long time to find correct block chain applications.

I'm a business owner and YouTuber and educator online. I'd love to give micropayments for licensing songs and images and videos but it's so time consuming it financially doesn't scale for me so I either just use it or I don't use it at all.


however I completely agree with the author that monopolists, censorship, intellectual property theft, rent seeking, and digital addiction are Terrible things.

The author I believe is making one false assumption here, he is applying the selection bias of the most successful tech companies and their idealogy and then applying that to everyone else, essentially just labeling and Grouping which is the exact thing he appears to be fighting.

No point of view or group of people is the problem.

I'd argue People with intentions that are only self Interested are the problem.

By reading this book you will get a good idea of history and many wonderful view points and i agree with him about 90% but the labeling and group blaming waa tough to manage at times.

it appears the author wants to go back to the good old days before tech, at times so do I but we can't go back, we can only go forwards.

you will understand the problems by reading the book but have no answer going forward as there was possibly one solution put forward...

Bit it all starts with awareness... we can't solve a problem we dont know exists

A precious gift from mr taplan for current and future generations. Fascinating unique experiences while transcending true art and pop culture with the likes of Dylan and the band as well as politics, big money, big data, and anti social media. Unvarnished truths from an authentic voice that should awaken even those of us hero worshippers and wannabes about where this all could be leading to....we are the product

The first and last chapters were interesting. He provided insight into problems these companies were creating and started discussing solutions. The middle of the book turned into a rant about how this generation's music and film were not as good as when he was younger, claiming the 60's and 70's era were the equivalent to the Renaissance. And finally he will let you know in every chapter that libertarians are bad, no reasoning, just they are bad.

Repair what the plutocracy has broken.

The time for plutocracy is over. I came to this book from an editorial in the Wall Street Journal. I was surprised at the position the author was thinking from but decided to continue with an open mind. This book challenged many of my preconceptions about market capitalism and libertarianism in the age of digital overlords. I was stretched and grew from absorbing this material.

Lovers of privacy, freedom, thinking, and artistic creation, please consider this book carefully. Allow it to disturb and motivate you. It certainly did me.

The author's voice is pleasant to listen to as well, although I chose the speed of 1.25x. It's a well mixed production. Good job!

What would have made Move Fast and Break Things better?

I wanted to understand the development process of newer companies. What I got was someone complaint about change and blaming the collapse of his life and others around him on digital culture. Written by a dying dinosaur unable to understand what is happening around him.

Has Move Fast and Break Things turned you off from other books in this genre?

Luckily there are great books like Creativity, Inc. which tell a tale of drive and success.

The description of how ARPA created the internet. Even moreso, the one where I decided to stop listening.

What character would you cut from Move Fast and Break Things?

This was a tale of the difficulty of clinging to old ways, process, and expectation during a time of rapid evolution and iteration. It reads like a barfly's lamentation of what the world did to him and those around him.