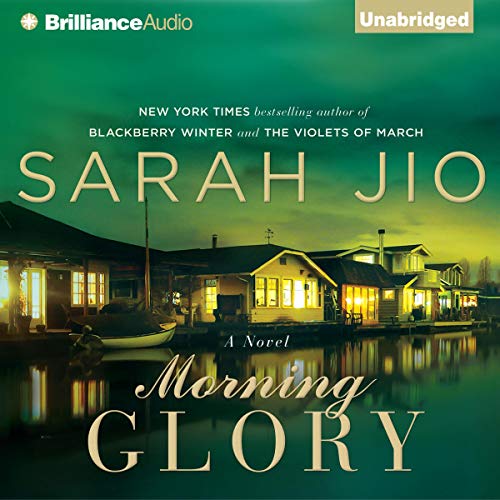 By: Sarah Jio
Narrated by: Emily Durante
Try for $0.00

In a Seattle houseboat community, the artistic spirit that has flourished since the 1950s may have ended one life, yet saved another.

On Seattle's Lake Union floats Boat Street. The farthest slip on the dock holds a houseboat sided with weathered cedar shingles and trailing morning glory, the white flowering vine whose loveliness is deceiving. In the 1950s, Penny, newly Mrs. Dexter Wentworth, takes up residence, dreaming of fulfillment as the muse to a successful local artist destined for national renown. In present day, Ada Santorini is drawn to the same floating home, hoping its gentle rocking will lull the pain of the personal tragedy that drove her from New York City. As Ada settles in, she discovers a trunk full of mementos of a radiant love affair that unfolded in Seattle’s most iconic locales. Neighbors reveal little about the past, only that the beautiful and mysterious Penny had a hold on all who knew her. The travel writer in Ada senses the journey of a lifetime. On Boat Street, Penny’s mysterious past and Ada’s own clouded future are destined to converge.

What listeners say about Morning Glory

Would you try another book from Sarah Jio and/or Emily Durante?

I may try another book from Sarah Jio but not if it's narrated by Emily Durante.

I have listened to so many wonderful books with simply fantastic narration (Beautiful Ruins being a recent favorite), but this is my first review. I feel compelled to speak about the quality of the recording or the narration.

When I first started listening to the story I actually thought there was something wrong with my iPhone or the Audible app as the narrator sounded like she was the computer generated voice of an early Mac computer - seriously. I then thought that the Standard Quality download may be the issue, so I changed my settings and downloaded the HQ version but it sounded the same (as does the sample audio on this site).

I very much wanted to enjoy the book but the stiff, compressed sounding narration just kept taking me out of the story. I'd be interested to hear if others feel the same. I recommend that folks listen to the audio sample to see if they can tolerate the narration prior to purchasing this.

Interesting and an easy read!

The author does a good job of separating her characters, although, at first it is a little confusing. However, once you have the identity of each character firmly placed the story becomes much more interesting and has a good " whodunit" novel!