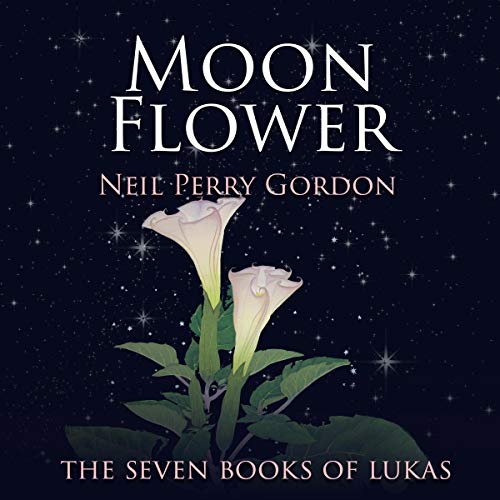 Moon Flower: A Seventeenth Century Tale of a Young Man's Search for the Great Spirit.

By: Neil Perry Gordon
Narrated by: Michael Fischbein
Try for $0.00

It’s the year 1675. Eighteen-year-old Lukas Pietersen is about to consume the ceremonial substance, known as Moon Flower.

The potent seeds from this nighttime blooming plant, as prepared and administered by a shaman, will cause Lukas to lose his memory and begin his quest to become a warrior of the Pequawket tribe.

This epic tale follows Lukas, a young boy in the Dutch controlled territory of New Amsterdam, as he meets chiefs, shamans, warriors, and the English army on his quest to seek a connection with the Great Spirit.

From the New World to the city of Amsterdam, down to the slave coast of West Africa, and across the Atlantic Ocean to the slave mart of Charles Town, Moon Flower tells the story of Lukas Pietersen's adventures and his battles with a fearsome evil spirt – the Wendigo.

What listeners say about Moon Flower: A Seventeenth Century Tale of a Young Man's Search for the Great Spirit.

Great tale set in the historically accurate seventeen hundreds. Sadly, many issues of that time we are still dealing with. Recommend for anyone interested in historical fiction or those the enjoy a good adventure.