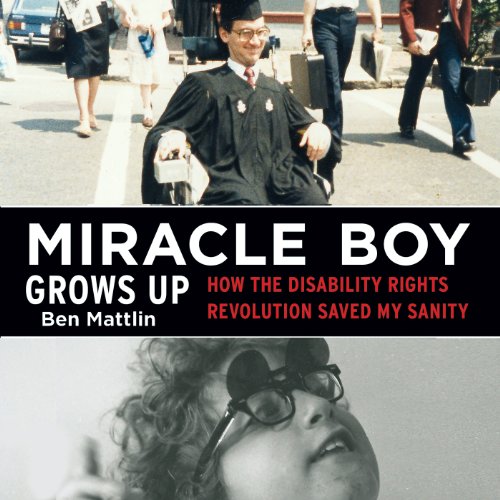 By: Ben Mattlin
Narrated by: Elijah Alexander
Free with a 30-day trial

No one thought Ben Mattlin would live past childhood. But that didn’t stop him.

Ben Mattlin lives a normal, independent life. Why is that interesting? Because Mattlin was born with spinal muscular atrophy, a congenital weakness from which he was expected to die in childhood. Not only did Mattlin live through childhood, he became one of the first students in a wheelchair to attend Harvard, from which he graduated and became a professional writer. His advantage? Mattlin’s life happened to parallel the growth of the disability rights movement, so that in many ways he did not feel that he was disadvantaged at all, merely different.

Miracle Boy Grows Up is a witty, unsentimental memoir that you won’t forget, told with engrossing intelligence and a unique perspective on living with a disability in the United States.

What listeners say about Miracle Boy Grows Up

I Enjoy hearing about his life. I wish there were more books like this one... ,& that it would be easier to find them ... the narrator did a great job I enjoyed listening to him .

this is a powerful work, not only about someone who discovered his identity as disabled and eventually flourished in it, but also a way of helping others do the same. much gratitude.

This memoir had me from the opening line. Written with honesty and humour by a person who has reflected deeply on their journey through life as a person with a disability. Insightful and moving, I in turn found myself laughing out loud and shaking my head. Many questions I would deep down love to ask Ben Mattlin about his experiences are answered with humorous and unabashed frankness. Elijah Alexander was a stellar narrator, he kept me engaged until the end.