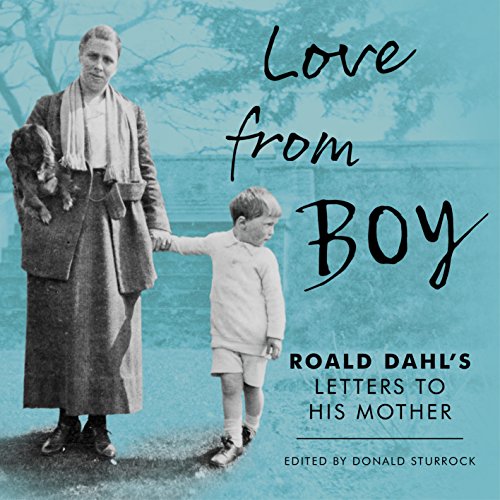 On the 100th anniversary of his birth comes a revelatory collection of letters from the nation's favourite storyteller.

'Dear Mama, I am having a lovely time here. We play football every day here. The beds have no springs....' So begins the first letter that nine-year-old Roald Dahl penned to his mother, Sofie Magdalene, under the watchful eye of his boarding school headmaster.

For most of his life, Roald Dahl would continue to write weekly letters to his mother, chronicling his adventures, frustrations and opinions, from the delights of childhood to the excitements of flying as a World War II fighter pilot and the thrill of meeting top politicians and movie stars during his time as a diplomat and spy in Washington. And, unbeknownst to Roald, his mother lovingly kept every single one of them. Sofie was, in many ways, Roald's first reader. It was she who encouraged him to tell stories and nourished his desire to fabricate, exaggerate and entertain. Reading these letters, you can see Roald practicing his craft, developing the dark sense of humour and fantastical imagination that would later produce such timeless tales as The BFG, Matilda, Fantastic Mr Fox and The Witches.

The letters in Love from Boy are littered with jokes and madcap observations, sometimes serious, sometimes tender, and often outrageous. To eavesdrop on a son's letters to his mother is to witness Roald Dahl turning from a boy to a man - and finally becoming a writer.

Roald Dahl started writing to his much loved widowed mother Sofie Magdalene in 1925 from prep school at the age of nine, and they continue up to his return from America to settle in Great Missenden after which there are gaps, until 1965 two years before Sofie Magdalene died. They show not just the fierce bond between Dahl and his mother, but also his emergence as a writer. (His first children's book James and the Giant Peach was not published until 1961).

Above all, these letters are entertaining: full of jokes, pranks, sharp observations, exuberance and energy. His relationship with Sofie Magdalene as well as deeply loving was clearly robust - Dahl's language is frequently extremely coarse and bawdy, but then his mother had given her reckless, rule-breaking son a motor cycle at the age of 16 and sent his favourite pipes from home for him to smoke at school at Repton.

Prep school was full of tales of escapades - fishing for crayfish to eat and one to put in a boy's bed; the new matron Miss Turner not lasting after she kissed a boy in the wash room. There was constant illness amongst the boys from nose-bleeds to pneumonia, and in one letter Dahl mentions almost in passing that 'poor little Ford died yesterday', following complications from measles, just as Dahl's adored seven year-old daughter would do many years later. Life at Repton was brightened by a fire which tore through the building;covering the study with pea soup when the pan they were heating up exploded;live rounds being fired by mistake during a school exercise - and Dahl's friend being expelled for 'immorality' with a younger boy.

The academic route was not for Dahl and he joined what would become the Royal Dutch Shell Company in Dar es Salaam where most of their time was spent getting 'whistled' with inordinate amounts of alcohol, suffering the heat and green mildew with all its attendant ailments. When War began he joined the airforce in Nairobi and it was from there he crashed in the desert and suffered the back injury which dogged him forthe rest of his life. But his letters remained jaunty throughout, urging his mother to move to the safety of Wales and making a story out of the dark days that followed his near-death experience.

It is only in the later letters after the death of his little daughter, the terrible injuries suffered by his baby son in a road accident, and the devastating stroke of his young wife that there are just glimpses of Dahl's real feelings. Everything is seen through the prism of Dahl's persona which befitted his 6'5" stature: enormous appetite for life in all its peculiarities with a correspondingly huge desire to entertain. These letters are unique - the mothers of today's up and coming writers won't be able to produce a similar crop from emails and messaging. We're lucky to share in these.

What an interesting life!

I knew little of Roald Dahl except that he wrote children’s stories. Now, having listened to letters that he wrote to his mother, from when he was at boarding school until her death, I have a quite different picture of him. He was a remarkable and idiosyncratic man of many talents, but also a man of his time. To outline his story here would be to undermine the book, so I will just say that his trajectory through life was full of interesting situations, ranging from the jeopardy that accompanies fighting in a war through to the privileges of celebrity and success. If you enjoy biographies of interesting people then you should enjoy this. Also, the narrators did an excellent job.

Didn't want this to end.

A fabulous glimpse into the life of one of life's real characters. What a life!

This book is a marvellous collection of letters
It has lots of elements that show the listener where Roald Dahl got the inspiration for many of his stories. He lead a very interesting life and these letters leave me wanting to know more .
Highly recommend this audible is very well narrated .

Absolutely loved listening to this, I learnt so much about Roald Dahl that I did not know. Absolutely fantastic would listen to this again over and over.

what an interesting and diverse life, told in a
most unusual way, not only a great storyteller
but a most interesting letter writer beautifully
read