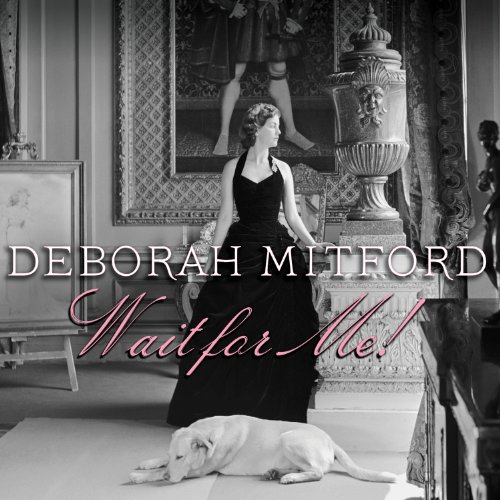 By: Deborah Mitford Duchess of Devonshire
Narrated by: Anne Flosnik
Try for $0.00

Deborah Mitford, Duchess of Devonshire, is the youngest of the famously witty brood that includes the writers Jessica and Nancy, who wrote when Deborah was born, "How disgusting of the poor darling to go and be a girl." Deborah's effervescent memoir Wait for Me! chronicles her remarkable life, from an eccentric but happy childhood in the Oxfordshire countryside, to tea with Adolf Hitler and her controversially political sister Unity in 1937, to her marriage to the second son of the Duke of Devonshire. Her life would change utterly with his unexpected inheritance of the title and vast estates after the wartime death of his brother, who had married Kick Kennedy, the beloved sister of John F. Kennedy. Her friendship with that family would last through triumph and tragedy.

With its intense warmth and charm, Wait for Me! is a unique portrait of an age and an unprecedented look at the rhythms of life inside one of the great aristocratic families of England. It is irresistible listening and will join the shelf of Mitford classics to delight audiences for years to come.

What listeners say about Wait for Me!

The last of the Mitford Sisters

The Mitford sisters continue to be wondered and written about. Deborah, now 90, is the youngest and only surviving sister of six, The novelist Nancy Mitford, the oldest sister was 16 years old when Deborah was born. Deborah became the Duchess of Devonshire and admittedly not political, especially in relation to her sisters. She writes of them lovingly for the most part as sisters not fascists - Unity and Diana - not communists - Jessica, known as Decca who is the only sister who left England for America and became an acclaimed writer here beginning with the expose of the funeral industry, "The American Way of Death". Deborah is a special person in her own right. She and her husband undertook the remodeling of their fabulous home and developed cottage industries as well, thereby tastefully restoring the home which has become a must-see destination of both English and visiting tourists. She is an honest but kind writer and adds much more perspective to the ongoing curiosity and the large library of tomes about her family. Her husband's government position sent her around the world and she had very many special friendships with notables in art and government. She married the younger Devonshire brother, the older had married Kathleen Kennedy, the sister of JFK and he was in line to become the Duke of Devonshire. He was killed in WWI just a few months after his marriage to "Kick" Kennedy (who died four years later in a plane crash). Deborah and her husband found themselves in a position they had not expected. As a result of these relationships in the family the Devonshires became very close to JFK and other members of the family. Her first hand observations of JFK's inauguration and later his funeral provide a very interesting and sensitive description of those events. As Duchess, she knew and in many cases had lifelong friendships with, includes many English notables of the time which makes the book even more interesting.

I don't read many memoirs, but this one was a real charmer--as is Deborah, Dowager Duchess of Devonshire. "Debo," the youngest of the famous (infamous?) Mitford sisters, is now 90 years old--and what a life she has lived! Her reflections are surprisingly personal, sometimes a bit sad but often endearing. Debo opens a window onto aristocratic life, which wasn't as easy as we might expect. Despite the Mitfords' status, they struggled to make ends meet through the 1930s and the war years, as did other Britons. Of course, their reduced circumstances were outshone by the whirl of their social set. Tea with Hitler, dancing with the young JFK, trying to pacify grumpy houseguest Evelyn Waugh, chats with Churchill and "Uncle Harold" Macmillan, attending Queen Elizabeth's coronation and Charles and Diana's wedding--the shining names that drop in and out of Wait for Me! are as numerous as drops of rain, and Debo has fascinating stories about each one of them. And, of course, we get the inside scoop on growing up and growing older with Nancy, Jessica, Unity, Diana, and Pamela, each of whom was extraordinary in her own way.

Debo came to writing late in life, her books focused on life at Chatsworth and written to fund the preservation of the great house. Many attribute Chatsworth's survival not only to her personal restoration work but to her savviness in opening the house to the public but to launch ventures such as a gift shop, plant shop, tea room, and even, for a time, a meat market featuring beef and lamb raised on the grounds. The Duchess is astonishingly candid about her 64 years of marriage to Andrew Cavendish, who became duke after his brother died in the war. While they fell in love at first sight, the marriage was not without its trials: several miscarriages, a child who died shortly after birth, and Andrew's struggle with alcoholism. The duchess has had a remarkable life and, thankfully, she has either a remarkable memory as well. Finely read and not to be missed!

What did you love best about Wait for Me!?

I enjoyed Mitford's perspective. She was wry and detached from the dramas of her life and other's lives. Life is tragic, life is joyful, that's how it is, let me recount it to you. People are funny, they have foibles, it's not the end of the world, it's makes life more colorful. Really enjoyed this.

The lives of the Mitford sisters reflect so many aspects of history during WWII. This is a fascinating book, easy listen and charming.

I’m sure the story is great, but the person reading is just horrible to listen to. I can’t even get through the first chapter.

Loved the book but the narrator's RP accent was a little to English for my American ears. I had difficulty understanding her at times, especially when using a word or phrase with which Americans are not familiar.

Some people should not write memoirs. The highlights of her life seem very interesting! As told here, they are not.

What does Anne Flosnik bring to the story that you wouldn’t experience if you just read the book?

Nothing, sorry. The worst is her impression of Churchill. STOP. IT.

Do you think Wait for Me! needs a follow-up book? Why or why not?

There are so many Mitford sisters books discussing the same events more or less, written by the admittedly undereducated sisters themselves. So, one could argue it already has prequels and sequels.

You'd have to be REALLY enamored with the English aristocracy to listen to the endless trivialities depicted here. This would have been better at 1/3 the length.

Took a bit to get into the narrator’s voice, but she was the correct choice. Felt transported and the details are perfect. The duchess’s personality shines through.

I'll Wait For You Anytime Debo

Debo, Duchess of Devonshire, a.k.a. Deborah Mitford, had the most interesting life, perhaps of all her siblings. The youngest Mitford child, she was overshadowed by her more notorious sisters, who dabbled with facism, communism and nazism. However, this book will leave your spellbound by the world she inhabited. She became Duchess by default when her brother in law was killed, and she singlehandedly transformed the vast estate that was hobbled twice by death taxes, into one of the world's sought after destinations, that of Chatsworth. Her story gives us much insight into world events, as she was friends with the Kennedys and other nobility. But her humble self shines through. I was enthralled and sad when she passed recently. I'm so interested in all biographies and histories of the British aristocracy and Debo's life was a fascinating life well lived. “AUDIBLE 20 REVIEW SWEEPSTAKES ENTRY”