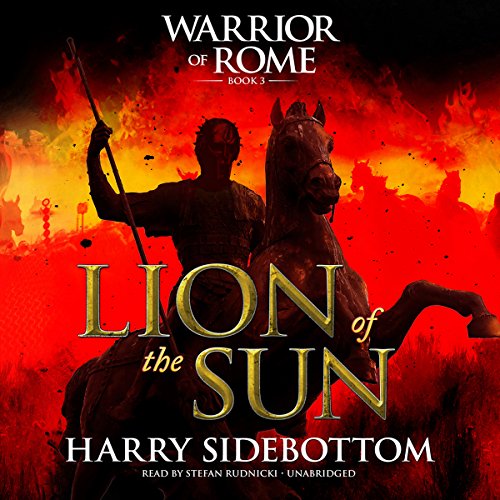 Lion of the Sun

Lion of the Sun

In Mesopotamia, AD 260, Ballista faces yet another enemy, the man the Syrians call The Lion of the Sun.

Betrayed by his most trusted adviser, Roman Emperor Valerian has been captured by the Sassanid barbarians. The shame of the vanquished beats down mercilessly like the desert sun as the frail old emperor prostrates himself before Shapur, king of kings. Ballista looks on helplessly but vows under his breath to avenge those who have brought the empire to the brink of destruction with their treachery. But first he must decide what price he will pay for his own freedom. Only the fearless and only those whom the gods will spare from hell can now save the empire from a catastrophic ending. Ballista, the warrior of Rome, faces his greatest challenge yet.

Best one so far!

I must admit I gave the first book in this series a 3, but after listening to 4 I am exposed as not the best judge. 1) continuity of the narrator... Stefan Rudniki has a great voice and the importance of continuity is evident as he gives a personality to the characters. 2) darn good story line and I am used to Sidebottoms sometimes sudden jumps in scenes. 3) authors historical scholarship gives depth to the cultures and customs of all the characters and the lands they are in. 4) Darn good story line, did I say that before? Unfortunately this makes Caspian Gates a bit of a let down.
By comparison I started another authors series and was so dismayed by the lack of everything Sidebottom brings to the table that I could not even listen mindlessly in traffic and returned it.

Where does Lion of the Sun rank among all the audiobooks you’ve listened to so far?

It's one of the all time favorites for me, but I'm in a bit of a zombie phase right now

What other book might you compare Lion of the Sun to and why?

don't recall, I liked it all though

continue to enjoy Sidebottoms stories. Performance was good but could use some fine tuning to be great.

Sidebottom does another great Job not turning a historical fiction into a boring 'study' he must have to teach as a professor. Many teachers have difficulty writing novels that do not put u asleep, BUT he has woven an in-depth group of characters & a rich, completely entertaining battle strewn life as a Roman war leader, I'm looking fwd to any new books he writes

I highly recommend this series if u like roman dynasty legends, but be ready for not only complexity but rather gory details (I love it), plus Rudniki is always a great narrator

loving the characters. maximus and calgacus are easily the best. starting to hate Julia... unfortunate

Would you consider the audio edition of Lion of the Sun to be better than the print version?

Never read the print version and most likely wouldn't

Ballista, he is the main character and his character grows with each action he takes.

Which character – as performed by Stefan Rudnicki – was your favorite?

All the characters Stefan Fudnicki does are great, he's a fantastic narrator. He brings each character to life with just the right accents, and emotion

When Balista learns his wife and sons killed (or believed so)

War in ancient times be it in Rome or any other time when inhumanity shows its ugly face can be only expressed as in a book like this one. The descriptive horror of every action, and consequence of the actions, especially by anyone who has the ability to see right from wrong. is really shattering, when choices are taken away from people. That is what war does, and turns ordinary individuals to do things they would never do under other circumstances. Great story, full of action and can truly turn you off from war.

Would you listen to Lion of the Sun again? Why?

Yes, eventually I'll listen to the whole series again. It's simply so good. So much action, great story, characters and since it's historical fiction you learn many things too.

What was one of the most memorable moments of Lion of the Sun?

It's been months since I listened and I still remember the ambush.

If you could take any character from Lion of the Sun out to dinner, who would it be and why?

Narrator is strong. Listen to a segment first. Either you'll really like it or hate it.
I just bought the 4th book because I don't have the patience to wait for it to come out on Audible.