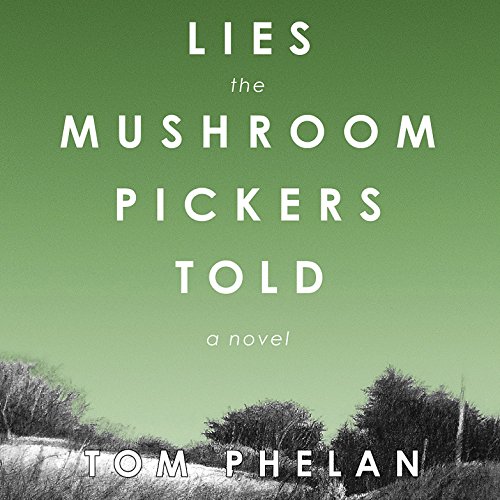 By: Tom Phelan
Narrated by: Jack Reynolds
Try for $0.00

Part human comedy and part mystery, Lies the Mushroom Pickers Told is an enthralling, masterful story about what holds a village together and what keeps people apart. When journalist Patrick Bracken returns to Gohen, the Irish village where he was born, he knows the eyes of the townspeople are on him. He has come home to investigate two deaths that happened decades earlier when he was a child, deaths that were ruled accidental. But Patrick knows - and believes the whole town knows - they were murders. He knows because he and his best friend Mikey Lamb were witnesses.

And so Patrick goes to see 80-year-old Sam Howard, the lawyer who conducted the inquest into the death of missionary priest Jarlath Coughlin. As he questions Sam and Sam's vibrant, loving, gossipy wife Elsie, he seeks acknowledgment of a cover-up and an explanation of why the Protestant establishment would help conceal a crime among Catholics. During their give-and-take - about this and the nearly simultaneous shotgun death of Lawrence Gorman (aka Doul Yank) - what emerges from their collective memories are a pungent, wry portrait of village life in Ireland and a tangle of human relationships, some twisted and some that show our better side.

What listeners say about Lies the Mushroom Pickers Told

Imagine you go to a bar. It's a divey sort of place with brassy light fixtures and warm wood, and you see some dishy guy with a raspy Irish accent and he tells you his name is Brendan. He has dark and mysterious eyes and smells of whiskey and leather since he's wearing a leather jacket. He's got a tall frame and the beginnings of what could be a spectacular beard. He caresses your cheek and whispers in your ear: "I'm going to ruin you for life tonight," so you go home with him. He does...*some* stuff to you, but you're waiting for the big awesome you've been promised. And then he just stops and rolls over, then goes and sits at the fire escape and smokes a cigarette, staring out the window broodingly, telling you all about the other generally dull and unlikeable rambling people that come from his hometown. He tells you about the one time he backpacked in Spain and how rough it is back in Ireland. He tells you about how stupid Valentine's Day is and how nobody's "real" anymore. You sit there, confused, and begin to have a looming suspicion that you're not actually going to get any satisfaction through the night, but you decide to stay and wait to see if there's going to be round two and THEN you'll have a chance for some kind of climax. It doesn't. He offers to take you to a divey bar that still happens to be open where you can get coffee and a little food. You say "I'm good, thanks," and realize that's the end. So you call yourself a car and go back home, wondering what the hell just happened while simultaneously thinking: "Well, that figured."

Where did this come from, a great story.

Where does Lies the Mushroom Pickers Told rank among all the audiobooks you’ve listened to so far?

What was one of the most memorable moments of Lies the Mushroom Pickers Told?

All the revelations to the reader that arent so revealing to the small town in which the story takes place.

Have you listened to any of Jack Reynolds’s other performances before? How does this one compare?

No, but in this book he performs without peer. One of the overall best readings that I have had the luck to listen to. I listen to this book like I listen to great music.

Laugh,cry, cringe a little it brings all the emotions of real life.

Don't miss the one in audio and/or print it's a great yoke.

At first I wasn't sure what was going on, but then I realized this was an Irish telling of an event from many years ago. The telling of it was wonderful; sometimes comical. This is a very refreshing read.

I listened to the first chapters three times because there were many characters, some with two names and I was confused. For me, this may have been easier to have the print version. I persevered to get accustomed to the Irish narrator. I do enjoy a native speaker which gives more depth of place and feeling to a novel. This narrator was exceptional with the many different children's, men's and women's voices.

The issue I have with the title is that I envisioned a town of mushroom pickers and struggled to find them. Again I may not have had this problem with a print version.

I loved the small rural farming community, similar to the one where I grew up in Michigan. l laughed the policeman who couldn't testify without veering off into twenty irrelevant directions before concluding. I'm a little like that myself.

The dialogue was lovely and lively. The relationship between the crusty old lawyer and his wife of fifty years was sweet and tart. my favorite character was the lawyer's wife, Els, who was a woman ahead of her time. A very good read and I wanted more of 1951 Ireland and all of the people in that small village.

Too convoluted and sad to enjoy

Haven't give a one star rating forever, but really could not get into this book. Very sad characters, bemoaning their fate over and over again. The names and nicknames were confusing as well as the formatting. Why was Eddie saving all that money? He felt for his sister, so why didn't he make life easier for her? What was Daul Yank doing by borrowing against the farm, trying to buy his way into heaven? Why? What was Patrick's motive for bringing all this to light? I have too many questions that weren't answered.

This was torture to finish. So repetitive and drawn out. I am so happy it is over. Lol.

This book went on and on until I couldn’t stand it any longer. Tedious beyond belief!

Very hard to listen to. The story is not interesting. I went days between listening and didn't miss it. This is a pass.

Lies the Mushroom Pickers Told is such an unusual book. I’ll just say that, if you have a love of and, perhaps a curiosity about, Ireland’s rural people of the 1950’s and going forward, , the idiosyncrasies of their lives, shaped overall by the hard-&-beautiful land and by centuries of serious tussles over land, power, religion, custom, you might enjoy this unusual book as did I.
Tom Phelan is a deft, fanciful and skilled storyteller, taking the most mundane daily actions of people and telling so much more than one would think possible — or, interesting! But, his writing of dialogue is gifted, his sense of place and people insightful and Jack Reynolds’ narration brings it all to life marvelously! I’m really glad I took s chance on Lies. I’m sure I’ll read/listen again, some time when I feel a need for great, delightful dialogue and unusual characters!

I would like to see ratings from now on with my audible purchases or I will close my account!!!! I am a Bible Believing Christian and I will not buy another audible until I see the rating. If it’s swearing or sex I’m not interested in that kind of story. I have a one star when it should have zeros. 000000

This was a chance find...I can highly recommend you give it a listen...especially as the performance is first class

A mystery made more mysterious than necessary

the performance was 100 per cent..really excellent. the language was interesting if overblown and long winded and the story was a bit thin and its uncovering over long. nevertheless it held me