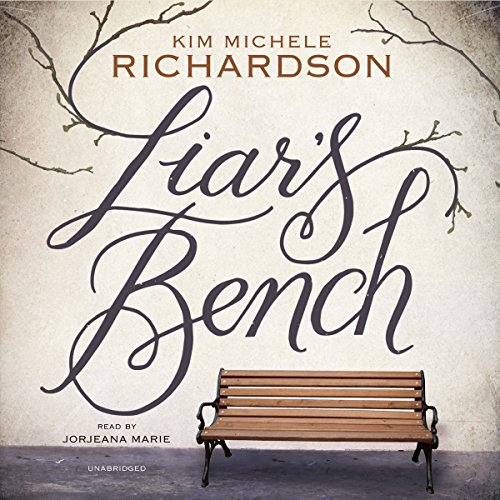 By: Kim Michele Richardson
Narrated by: Jorjeana Marie
Try for $0.00

In the best-selling tradition of The Secret Life of Bees, Liar's Bench is an atmospheric, compulsively listenable tale full of heart and history, set in 1970s Kentucky and exploring civil rights and family secrets.

In 1972 on Mudas Summers's 17th birthday, her beloved mama Ella is found hanging from the rafters of their home. Most people in Peckinpaw, Kentucky, assume that Ella's no-good husband did the deed. Others think Ella grew tired of his abuse and did it herself. Muddy is determined to find out for sure either way, especially once she finds strange papers hidden among her mama's possessions.

But Peckinpaw keeps its secrets buried deep. Muddy's almost-more-than-friend Bobby Marshall knows that better than most. Though he passes for white, one of his ancestors was Frannie Crow, a slave hanged a century ago on nearby Hark Hill Plantation. Adorning the town square is a seat built from Frannie's gallows; a tribute, a relic - and a caution - it's known as Liar's Bench. The answers Muddy seeks soon lead back to Hark Hill, to hatred and corruption that have echoed through the years, and to lies she must be brave enough to confront at last.

Kim Michele Richardson's lush, beautifully written debut is set against a southern backdrop passing uneasily from bigotry and brutality to hope. With its compelling mystery and complex yet relatable heroine, Liar's Bench is a story of first love, raw courage, and truths that won't be denied.

What listeners say about Liar's Bench

I am so glad to have discovered this author!!

Kim Michelle Richardson weaves a story not unlike Truman Capote . She takes you to another time and place to the backwoods of Kentucky and I myself felt as though I had been watching the story unfold while peering over the characters shoulders. The narrator did a great job switching back and forth between characters and has a wonderful voice. However , at times she had a tendency to start a type of sing-song lilt that was distracting I had to switch to reading. I dont think i'll be able ro get through another book listening to this narrator which is a shame because she has the potential to be one of the best.

The synopsis prepared me for the murder by hanging of two women, one around the Civil War, and one in 1972 Kentucky. It did not indicate the further content of domestic violence, hate crimes, animal abuse, sexual assault, and police brutality. Be braced for the repeated use of the n-word. This was a rough one to read. I stuck it out for the exquisitely understated narration.

One of the best books I have read in a long time. I recommend it highly.

The authors words are like poetry. I love reading her work. A heart breaking and heart warming story about racism, deep secrets, family and love in small town Kentucky.

Lord, help me!! That book ran slower than molasses. It was an agonizing mix of interest and begging for it to MOVE ON!! Great narrator and good writing but it moved S O S L O W!

Too much description and not enough storyline.

While the author excels in elaborative description of absolutely everything, it distracts and slows the story to the point of boredom. Having lived in the Deep South, I also find it implausible that the two main characters would have been dating in 1970s Kentucky. More idealistic than realistic for the time period.

A well told story of young love mystery, murder, with an adventure in small town Kentucky.

Slow start but well worth it

The books starts a little slow but it gets more engrossing towards the middle and finishes with a well done ending. This was a great book that sheds light on older times that should never be forgotten.

I really like the story and the narration was great. I would get a little bored with the over narration of surroundings but the story line kept my interest until the descriptive information passed. Overall a very enjoyable story that kept me eager to the end.

I enjoyed this story although I thought it slowed a little in the middle I still enjoy this read. I am looking forward to reading other stories by this author.😊