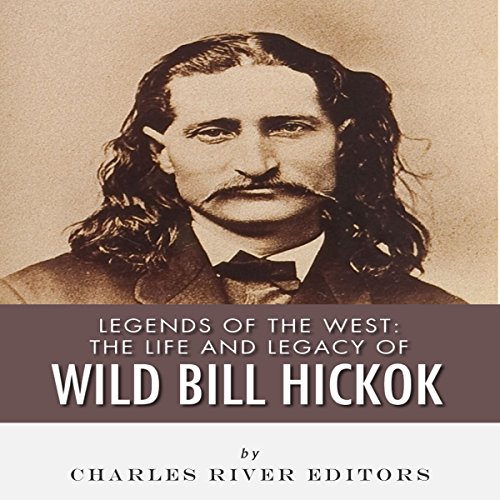 Legends of the West: The Life and Legacy of Wild Bill Hickok

By: Charles River Editors
Narrated by: Steve Marvel
Try for $0.00

"Wild Bill was a strange character. Add to this figure a costume blending the immaculate neatness of the dandy with the extravagant taste and style of a frontiersman, you have Wild Bill, the most famous scout on the Plains." (General George Custer)

Space may be the final frontier, but no frontier has ever captured the American imagination like the Wild West, which still evokes images of dusty cowboys, outlaws, gunfights, gamblers, and barroom brawls over 100 years after the West was settled. A constant fixture in American pop culture, the 19th-century American West continues to be vividly and colorful portrayed not just as a place but as a state of mind. In Charles River Editors' Legends of the West series, listeners can get caught up to speed on the lives of America's most famous frontier figures in the time it takes to finish a commute, while learning interesting facts long forgotten or never known.

In many ways the narrative of the Wild West has endured more as legend than reality, and a perfect example of that can be found in the legend of James Butler Hickok (1837-1876), forever known as "Wild Bill". Indeed, separating fact from fiction when it comes to the life of Wild Bill is nearly impossible, something due in great measure to the fact that the man himself exaggerated his own adventures or fabricated stories altogether. When he was killed while playing poker in the mining South Dakotan outpost of Deadwood, he put Deadwood on the map and ensured both his place and his poker hand's place in legend.

What listeners say about Legends of the West: The Life and Legacy of Wild Bill Hickok

Would you try another book from Charles River Editors and/or Steve Marvel?

You can't escape the text book feeling at the beginning but about half way through it really got interesting for me. 90 minutes later I was very satisfied and will download more of this series.

Would you recommend Legends of the West: The Life and Legacy of Wild Bill Hickok to your friends? Why or why not?

Yes, a nice glimpse at the old west

Have you listened to any of Steve Marvel’s other performances before? How does this one compare?

Was Legends of the West: The Life and Legacy of Wild Bill Hickok worth the listening time?