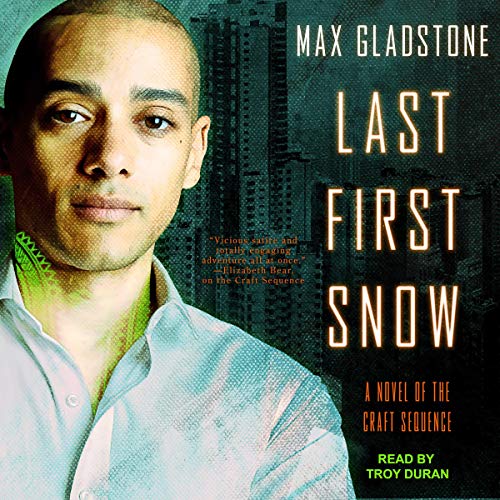 By: Max Gladstone
Narrated by: Troy Duran
Try for $0.00

Forty years after the God Wars, Dresediel Lex bears the scars of liberation - especially in the Skittersill, a poor district still bound by the fallen gods' decaying edicts. As long as the gods' wards last, they strangle development; when they fail, demons will be loosed upon the city. The King in Red hires Elayne Kevarian of the Craft firm Kelethres, Albrecht, and Ao to fix the wards, but the Skittersill's people have their own ideas. A protest rises against Elayne's work, led by Temoc, a warrior-priest turned community organizer who wants to build a peaceful future for his city, his wife, and his young son.

As Elayne drags Temoc and the King in Red to the bargaining table, old wounds reopen, old gods stir in their graves, civil blood breaks to new mutiny, and profiteers circle in the desert sky. Elayne and Temoc must fight conspiracy, dark magic, and their own demons to save the peace - or failing that, to save as many people as they can.

Set in a phenomenally built world in which lawyers ride lightning bolts, souls are currency, and cities are powered by the remains of fallen gods, Max Gladstone's Craft Sequence introduces listeners to a modern fantasy landscape and an epic struggle to build a just society.

Very much in line with the rest of the series, if you liked the writing in the other's you will like this.

Yet another different reader, this one really suits the point of view.

If you can listen with a sub-woofer, very deep and rumbly. I like it.

I love the craft sequence for its highly imaginative setting and excellent characters, and Last First Snow continues the trend! Though the lens of the fantasy setting, these novels allow us to examine real world problems with a frankness that would otherwise be very uncomfortable. If you've made it this far, you know what I mean and will enjoy this novel at least as much as the ones that came before it!

loved the first four books, but this one lacked narrative drive. never felt like I was getting to the bottom of anything very interesting. I wasn't very invested in the characters. I am biased insofar as I have never enjoyed prequels.