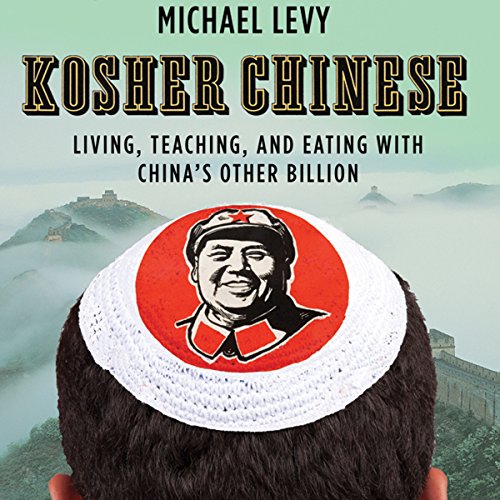 An irreverent tale of an American Jew serving in the Peace Corps in rural China, which reveals the absurdities, joys, and pathos of a traditional society in flux.

In September of 2005, the Peace Corps sent Michael Levy to teach English in the heart of China's heartland. His hosts in the city of Guiyang found additional uses for him: resident expert on Judaism, romantic adviser, and provincial basketball star, to name a few. His account of overcoming vast cultural differences to befriend his students and fellow teachers is by turns poignant and laugh-out-loud funny.

While reveling in the peculiarities of life in China's interior, the author also discovered that the "other billion" (people living far from the coastal cities covered by the American media) have a complex relationship with both their own traditions and the rapid changes of modernization. Lagging behind in China's economic boom, they experience the darker side of "capitalism with Chinese characteristics", daily facing the schizophrenia of conflicting ideologies.

Kosher Chinese is an illuminating account of the lives of the residents of Guiyang, particularly the young people who will soon control the fate of the world.

Not quite his target audience I guess

I could understand if folks have a higher opinion of the book than I came away with, but I really wasn't able to identify with the author, being neither Jewish, nor a basketball fan, nor knowledgeable of the music to which he sometimes refers. The "Jewish angle" seemed little more than a marketing hook to me - he makes no dietary concession at all, presumably eating pork during his time there, though he does host a Friday "Shabbat night" for his Chinese students. Unlike in Hessler's book, we get little insight into the teaching experience itself, with the emphasis placed on the personality of his students, the basketball playing (which to be fair includes a fascinating encounter with a fortune teller), as well as his friendship with a local ethnic minority family. Overall, the book was okay - not sorry I listened to it, but by the time the eight hours were up I was quite ready to go on to something else. Narration took getting used to as George Backman sounded somewhat older than thirty years, though I can see why he got the job as his (seemingly perfect to me) Chinese accent, and Chinese-accented English voices, were a definite plus.

Yes. I love Chinese culture and this was well written and from the heart. But I did not like the narrator. Voice did not fit the age/image of the writer. Was he chosen because of his Chinese? I would have preferred to read the book.
I have recommended that they read the book.

What other book might you compare Kosher Chinese to and why?

What aspect of George Backman’s performance would you have changed?

Could you see Kosher Chinese being made into a movie or a TV series? Who should the stars be?

Movie maybe (but it would probably not be a box office hit!)...not a TV series

Have been to China and could relate!!!!

Familiar with China and Recommend this title

What made the experience of listening to Kosher Chinese the most enjoyable?

It was valid, I spend a lot of time in China, in the Northeast and Shanghai and while China is changing so rapidly this book is relevant. The ocassional reference to the Phillies was quite good, seeing that the season is starting and I am in China.

The author because I could relate to his experiences and reflected a lot on how he handled certian situations versus how I handled similiar situations.

Have you listened to any of George Backman’s other performances before? How does this one compare?

I loved the English names that some of the characters chose, so valid, and I have given advice on names without the same guilt that the author had - I guess it is easier being a scientist versus a Peace Corp Volunteir.

A thoughtful look at contemporary China

This is a thoughtful and beautiful observation of life in contemporary China. Levy travels to the "heart of China" - a provincial city located far from Beijing, Shanghai, Western factories and the economic boom. Michael Levy is a good storyteller and a sensitive observer, who is caring about the people around him while remaining acutely aware of his own biases and Western perspective. All these make the book not only thoughtful and interesting, but also unique.