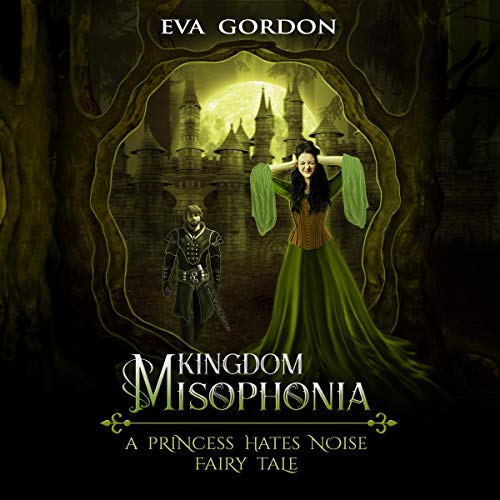 By: Eva Gordon
Narrated by: Traci Arlene
Try for $0.00

Beautiful and talented Princess Amanda, the next queen of Milathonia, has it all. Yet, she, along with her father and brother, are cursed with misophonia - the hatred of certain sounds. Isolated from other kingdoms, Amanda has lived a sheltered life. As a gifted artist, Amanda begs her father to let her attend the art academy in Zolonia. The king agrees, but only if she uses a fake identity and finds the proper suitor.

Captain Dash Lysander, a returning war hero, takes a well-paying job as a bodyguard to an academy student. Traumatized by war, which included battling man-eating fleshers, Dash hopes he can do his duty without suffering from day tremors. Upon meeting his charge, Dash is immediately smitten. However, his duty is to protect her, not court her.

Princess Amanda and Dash are drawn to one another. They do their best to stave their hidden passion, despite the looming danger of fleshers and secrets that could ruin everything.

What listeners say about Kingdom Misophonia

Unfortunately this was not a young adult novel at all. Weird combination of cussing and kid language. Felt like if they removed the b word then I could have read this to a first grader.

This was a fairytale style of a story with an interesting princess. She wants to go to art academy which she is allowed to do but she has to hide her identity and have a bodyguard to keep her safe since she is a princess and people may want to hurt her for that or kidnap her.The bodyguard has to work through his PTSD as well which was an interesting aspect to the story and I enjoyed getting to see the different things from different points of view. And there is also the quirk with the ears and hearing which was very interesting. I liked this take on a fairytale and the plot kept things moving very nicely.

Let me start by saying that fantasy is not my preferred genre but it doesn't mean that I don't enjoy a good fantasy story. As a musician, I was drawn to the concept of someone struggling with misophonia and I also appreciated the depiction of a war hero suffering with PTSD. I enjoyed the majority of the story but there was some repetition throughout the book on what misophonia was for the character instead of continual building of that aspect of the story and I wished there was a little more to the ending/epilogue. It wrapped up just a little too quickly for me. The narration was okay and there were different voices for characters so it makes it easy to follow the story but at the same time, I didn't fully enjoy the narration. I found some of the voices/vocal quality irritating so that distracted me for fully enjoying the story. This is just my opinion and reaction to the narrator and other listeners may be fine with the narration. I received a copy of the audiobook for free from the author at my request and am leaving this review honestly and voluntarily.

I totally enjoyed listening to this exciting story and found it very interesting. I had never heard of misophonia before, but can commiserate with Princess Amanda and her family as I, too, suffer very slightly from an intolerance of listening to someone chew or clink their cutlery on their plate…especially the noise generated by one particular person I must deal with on a daily basis. The overall plot of the story is well written and also deals with her dashing bodyguard’s PTSD and the angst created by the unexpected love match that grows between the princess and her bodyguard. The narrator did a great job in bringing this tale to life. I was given this free review copy audiobook at my request and have voluntarily left this review.

Really enjoyable storyline that easily held my attention. The characters were relatable and the narrative well done.

A fantastic adventure and loved it. Narrator did a fantastic job also on this audiobook. One of my favorite authors.

Not your typical fairytale!

I love the idea of being read to. Especially a fairytale that isn't your typical fairytale. Is there a princess? Yes and she has a disability. She suffers from a severe case of misophonia which is perfectly alright in her kingdom. The laws in her kingdom cater to her unique needs. But, like most fairytales, she is due to leave her kingdom to get her degree. Armed with a hidden identity and magical ear plugs, she is ready to take on her education. Her father's only requirement is that she have a guard. And only the best will do. And the best is Captain Dash Lysander, a decorated war hero who suffers from PTSD and who has fallen on hard times.

The princess and the warrior experience the instant fairytale-like attraction one would expect. They also deal with their personal issues, enjoy meaningful friendships, stave off flesh eating monsters and so much more. This audiobook is fun to listen to. Listening to it is reminiscent of being read to as a child except with more complex characters and situations. And the expected happily ever after does make an appearance, though not quite in the traditional way.

What an enjoyable listen

Well this was certainly a enjoyable listen Princess Amanda has one very strange affliction but so does her father and brother and others from her country Milathonia. They hate certain noises like snoring, loud chewing, sniffing these I can agree with but to them it can trigger rage. Princess Amanda is given the chance to travel abroad so that she can study her art but this is where things really get interesting. She gets to meet the handsome Captain Dash a war hero, she makes a friend, and fights the ugly beasts that were fought during the war. The story has romance, betrayal, twists and turns it touches on issues like PTSD, people who are sensitive to nosies. Overall it was a great story. It is certainly different but in a good way. The characters are well developed and the world building is great.
I’ll certainly be listening to the book again.
Tracie the narrator also did a great job, she used character voices and changed the tone of her voice to suit the situation.