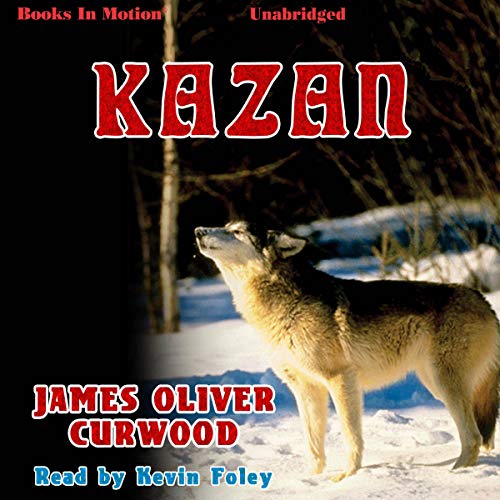 By: James Oliver Curwood
Narrated by: Kevin Foley
Try for $0.00

Part wolf, part Husky, he was born to the wilderness and carried his burden among men stoically. He had known starvation, bitter cold, overwork and suffering at the cruel hand of man. He was a giant among his kind and as fearless as the men who drove him mercilessly through the perils of a frozen world. And now, through the uncertain hand of fate, he is free...he is called Kazan, the Wild Dog. But his journey has just begun and survival against the unforgiving wilderness with his blind mate, Grey Wolf, is a personal challenge. He had never known fear...until now!

What listeners say about Kazan

Captivating tale for a lover of dogs and the wild

If you could sum up Kazan in three words, what would they be?

What was one of the most memorable moments of Kazan?

The forest fire, particularly when Kazan's then blinded wolf mate refuses to cross the river to safety and they had to find another way to save themselves.

Did Kevin Foley do a good job differentiating all the characters? How?

Well, not really but not bad either. I mostly noted how he portrayed the women characters voices which I found auitable enough.

When Kazan's blind wolf mate tried to hold on to any remaining scent of him; sleeping in the very same spots he had slept, even laying her head on the club that still had Kazan's blood and hair on it from the beating the man who had kidnapped him had given the poor wolf-dog...The rain washed all those away in the night but she found another spot with his scent where they had made their last kill but that too was soon washed away...Bare in mind that she was completely blind - a lynx had ripped out her eyes years ago.

I first read this as a young child and though most of its details had slipped my mind in these 20+ years, I still remembered how great this story was. This is a wonderful story about wilderness and the nature of dogs and wolves, and how a dog who was born and grew up with humans will always remain a dog, having some loyalty to humans, no matter how wild he becomes and even if he is part wolf. (In Kazan's case he really only loved women, as women had never beaten him.) Yet also how well a part wolf dog can adapt and belong into the wilderness. It also seems like the author reall knew about the Canadian wilderness, and the sled dogs of the early 1900's so it's like this story could have really happened.

I recommend this to people who love dogs, wolves and/or wilderness adventures BUT note that this may be upsetting to very young children because there's a lot of violence; men beat the dogs mercilessly with clubs and whips as punishments and/or to tame them and Kazan himself receives several of them, and there's also a lot of violence between the wild animals. It's fairly graphic, too.

The narrator is fine, especially for children. My only complaint is that it is very clear he recorded this in three different takes, possibly all in different locations. As in the recording wasn't edited to sound similar, the patching is very clear. But that's really minor, not too distracting.

Would you listen to Kazan again? Why?

Yes. I have read the book several times and I am totally in awe of the story

The authors knowledge of the Yukon gold rush and the life in the great white north, especially his knowledge of sled dogs, dog fights an wolf packs.

Before Jack London there was James Oliver Curwood. Before White Fang there was Kazan a truly mighty animal that was part wolf and part dog. It is his story of love and hate and the will to live.
Kazan starts out with human love and warmth and the story ends with pure animal love. It has the desperation of starvation, the warmth of true love, the pure hate of man and the fear of fear itself.
It is a very moving story and the author clearly has a fundamental knowledge of the gold rush days, life in the great white north, the bitter cold, driving snow, desperation of hunger for both animal and human alike.
I would recommend this beautifully told novel to anyone who loves adventure, romance, antiquity and excitement. Once started it is hard to switch it off.