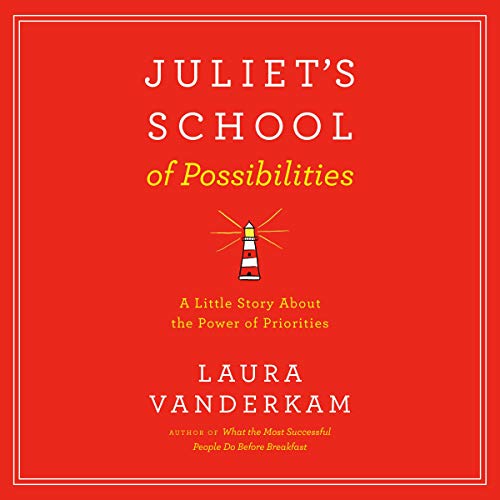 A charming, life-changing fable that will help you rethink your whole approach to time, priorities, and possibilities.

Riley Jenkins is in trouble. An ambitious, hardworking consultant in her late 20s, she's used to a lifetime of nearly perfect evaluations - until she gets a terrible performance review from her boss. How is that possible when Riley does everything her clients want - including answering emails 24/7 - faster than they expect it?

That's precisely the problem: She's spread too thin. Despite her insane hours and attention to detail, Riley can't produce the thoughtful work her clients expect. Now, she's been given 30 days to close a major deal, or she's out. Meanwhile, her personal life is also on the edge of disaster, with her boyfriend and close friends losing patience with her chronic unavailability.

The last thing Riley wants, at a stressful time like this, is to attend a women's leadership retreat with some of her colleagues. But she can't get out of her commitment: a weekend in New Jersey at some silly-sounding place called Juliet's School of Possibilities.

Yet before long, Riley is surprised to find herself intrigued by Juliet, the lifestyle maven who hosts the conference. How does a single mother of two run a successful business while acting as if she has all the time in the world? The answer may lie in one of Juliet's Zen-like comments: "Expectations are infinite. Time is finite. You are always choosing. Choose well."

By the end of this story, you'll join Riley in rethinking the balance between your present and your future, between the things you have to do and the things you want to do. Like Riley, you can free yourself from feeling overwhelmed and pursue your highest possibilities.

"Laura is my go-to expert for time management and Juliet's School of Possibilities is a delightful book. You can read it in a couple of short sittings, then go away with a lifetime of application." (Chris Guillebeau, author of Side Hustle and The $100 Startup)

"Thousands of books explain how we should set priorities, stay focused, and make time for what truly matters - but that advice, however sound, is all too easy to ignore. Laura Vanderkam takes a different approach. By harnessing the irresistible power of story-telling, she makes those aims vivid and compelling in an entirely new way, to show us how and why we can make room for possibilities." (Gretchen Rubin, author of The Four Tendencies and Better Than Before)

"Volumes have been written about abundance versus lack mentality, typically as they relate to money. But who among hasn’t lamented, 'I don’t have enough time!'? Ah, but you do - and Laura Vanderkam’s sweet-and-sage parable will show you exactly how to find it, use it wisely, and revel in it richly. Read Juliet’s School and you too will find yourself saying, “Oh, the possibilities!” (John David Mann, coauthor of The Go-Giver)

What listeners say about Juliet's School of Possibilities

The guide is excellent but...

The romance and the magic didn’t help.
But, yes, the principles behind are rock solid and ver well explained.
I am recommending it to my children but with apologies for the cheese part

Loved it. Very relatable. Could not put it down. Will look for more books by this author.

loved it ..the narration is superb and this story format works to make sure that we don't forget the lessons!

I loved this short parable on managing personal and professional priorities! I already fell like I use my time well, but there are a few more things I'd like to accomplish with my time. This book put things in perspective and I have a better vision for what I need to cut to spend my time in a way that aligns with my life goals. It may just be the kick in the pants you need too!

Something every Business woman should listen to.

Great story with a powerful underlying meaning. It found myself laughing and enjoying things with the main character. Definitely something I will listen to over and over.

This was something I bought because I like the authors other work. The book was short and I like the story. It did make me think.

Great narration. I was drawn in immediately. I could identity with the characters. Starting on my personal and professional vision now.

I enjoy this story was easy to listen to and very thought-provoking for myself. I would recommend this book for others.

The story was wonderful. It truly brought home the concept of making changes for a fulfilled life.

Laura did a great job of narrating her book; I think it added that much more to the story. it was creative and entertaining while driving the point home. I saw myself in Riley many times in this book.

I like the idea of envisioning the future possibilities and then analysing yourself in the light of those visions. I also like the fact that the book is short and that the message is crisp.

Not a great book

The book is about prioritising important things in your life. That's pretty much it! The story tells you about a lady who can't do that.

Good parable. Definitely made me think

Good. But too short. It's more like a novella. It's only 140 pages and ends rather abruptly. She should have simply carried on the narrative and explored how these ideas about time play out in the real world, rather just having a fluffy ending. In reality we all face challenges around deciding on priorities on a moment by moment basis, and this never explored this properly. It had a good setup to explore that, then just ended. Should really have been double the length, and explored this dimension of time management. Good though. Worth a listen.

Took me a while

I love Laura’s books but this one I found almost too overwhelming. Perhaps because it’s relatable.

I understand the rat on a wheel feeling. I would have liked to hear more about how Riley gets off this wheel with a few small ideas

Heard about this on Impact Theory, this was well worth the listen, it was very inspiring