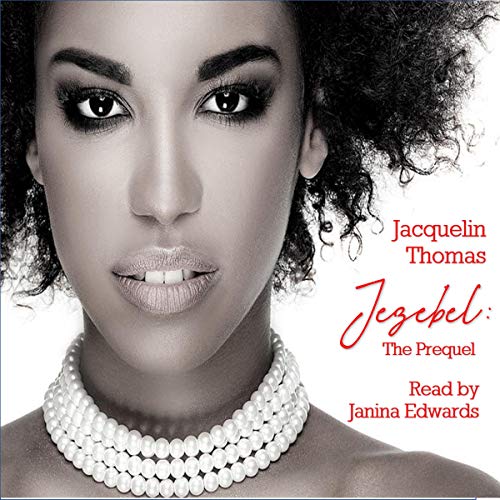 By: Jacquelin Thomas
Narrated by: Janina Edwards
Try for $0.00

Before Jessie Belle Holt, there was Anabeth Grainger Holt - her mother. In the 4th installment of the Jezebel series, Anabeth had dreams but put them aside to marry the young pastor chosen by her parents. When she gives birth to Jessie Belle after several miscarriages, the little girl becomes her world, but status and respect means everything to Anabeth.

When her daughter threatens to destroy the perfectly painted family picture that Anabeth has created, she is forced to make some choices and keep secrets that will haunt her for the rest of her life.

What listeners say about Jezebel: The Prequel

I felt mesmerized by the narrator and the author's story.

Janina (narrator) was AMAZING. I listen to a lot of African-American fiction and this production is right up there with Recorded Books and Blackstone Audio. Her voice was perfect for Anabeth and Jessie Belle.

(Disclosure: I received an advanced listening copy of this audiobook in exchange for an honest review.)

this is the first audio book of Jacquelin that I listened to. The narrator was engaging, the story captivating and fun

I can’t say enough how much I enjoyed this book! This book follows three generations of women in an era where reputation was everything and how the fruit really doesn't fall far from the tree. Some people may be shocked that this is a Christian book as this book deals with some dark issues such as temptation, manipulation and deception. However, even in the days of the bible they dealt with these issues as well. We can take away from this story how secrets kept in the dark can eat you up. The narrator Janina Edwards did an amazing job with all the different voices and really made this story come to life. The author gave me a free copy of this book on Audible in exchange for an honest review.

This was not what I was expecting from this book at all. It has adultery, lust, social issues, homophobia, religion, religious bias, lies and more. I have not read any of the other books in the Jezebel series, but I think I will now. Annabeth was willing to give up her dreams for her family. Her parents wanted her to marry the assistant pastor, but she was in love with someone else. Well, after getting it out of her system, her mother helps her to disguise her loss of virginity for her wedding night. Several years later, along comes her daughter Jesse Belle, well, the apple doesn't fall far from the tree. I was not sure if I liked these characters or not. They were manipulative and did what they had to in order to get what they wanted. It looks like they will be getting some payback in the future books. I listened to the audiobook narrated by Janina Edwards. The story takes place in the south and Janina Edwards had the accents down pat. I enjoyed her voices, expression and inflection. It made this story a wonderful one to listen to.