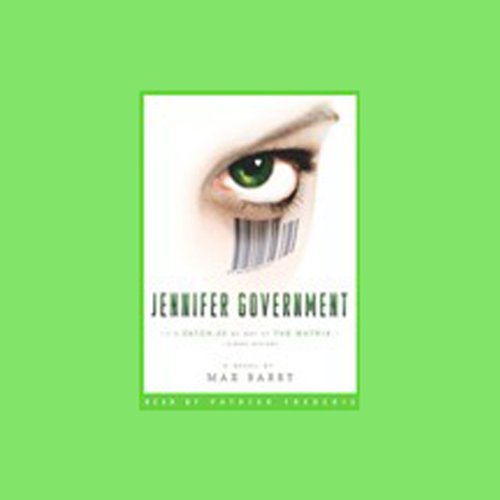 By: Max Barry
Narrated by: Patrick Frederic
Try for $0.00

In Max Barry's twisted, hilarious vision of the near future, the world is run by giant American corporations; taxes are illegal; employees take the last names of the companies they work for; The Police and The NRA are publicly-traded security firms; the U.S. government may only investigate crimes if they can bill a citizen directly.

Hack Nike is a lowly merchandising officer who's not very good at negotiating his salary. So when John Nike and John Nike, offer him a contract, he signs without reading it. Unfortunately, Hack's new contract involves shooting teenagers to build up street cred for Nike's new line of $2,500 sneakers. Scared, Hack goes to The Police, who lease the assassinations to The NRA.

Soon Hack finds himself pursued by Jennifer Government, a tough-talking agent with a barcode tattoo under her eye and a rabid determination to nail John Nike. In a world where your job title means everything, the most cherished possession is a platinum credit card, Jennifer Government is the consumer watchdog from hell.

Jennifer Government is a Catch-22 for the New World Order, a satire both broad and pointed, deeply funny and disturbingly on-target.

"It's Catch-22 by way of The Matrix." (Kirkus Reviews)
"A refreshingly creative and unique read." (Booklist)
"A 'funny and clever novel' that aspires to be 'a kind of ad-world version of Dr. Strangelove'." (The New York Times Book Review)

What listeners say about Jennifer Government

Take Off Your Blinders

This book is a great story with fun characters and a twisted sense of humor. The basic plot becomes pretty believable when corporate competition turns ugly and companies like Nike, IBM, the NRA, Mitsui, McDonalds, Burger King, the government, and others will do anything to capture the customer's dollar.

Like most good science fiction, it gives you a new way to look at a twisted future.

The story gets better as it goes on, so don't give up when you first start this book. The narrator is the biggest problem at first, he sounds like someone doing a poor Phil Hartman imitation, but by the end you realize he was perfect casting. Enjoyable and entertaining.

'Jennifer Government' is by no means a great book, but it sure is an entertaining one. Max Barry takes us on a great ride through a bitterly absurd future where corporations are so influential as to virtually replace governments.
The story is generally well paced. My only complaint would be that I didn't find out as much as I would have liked to know about Jennifer. However, I just saw that there is an unabridged version. Had I seen this earlier, I would have bought it instead.
For fans of fiction and action alike, Max Berry provides good, solid, and not-so-deep entertaining read.

I loved it! You probably need a little bit of a sick sense of humor. It's like Dilbert with a marketing emphasis. I never heard of the author before but I'll look for more by him!

It was a fun listen. The tongue-in-cheek satirical style was reminiscent of Neal Stephenson. What depth was lacking in character building was more than made up by the hillarity of the writing. I didn't find the narration all that objectionable, though it certainly doesn't standout. The delivery was excellent, and certainly goes well with the tone of the book. I'm a little disappointed that this wasn't the unabridged version, though.

This was a great deal of fun and for those who love Vonnegut, I think you find a familiar feel to the grandious rediculousness of the story. I only wished that Audible had the unabridged version because I feel that I missed out on some of the plot development. Highly recommend.

Max Barry has a wonderfully cynical view of the future. The story unfolds in the world he foresees as the public's religion, politics and patriotism meld into the corporate identity. I found it to be a fun story that plodded along a bit. I found no real fault with the narration but rather Barry's writing style. A great story lacking only a more published author.

But this was a great listen nonetheless, enjoyed the narration and the story and, having read the whole book years ago, I couldn't tell what had been cut out, so not really any complaints.