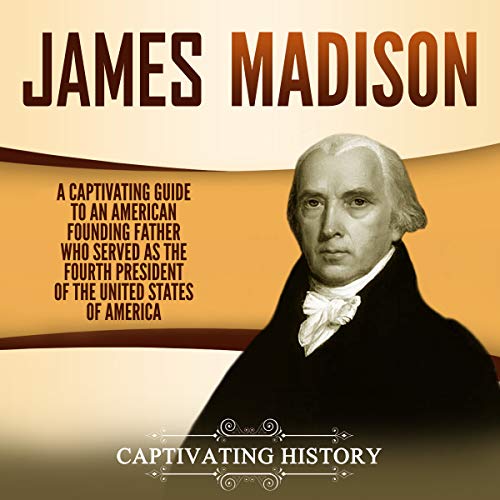 James Madison: A Captivating Guide to an American Founding Father Who Served as the Fourth President of the United States of America

James Madison earned the title “Father of the Constitution”. How did this man who was diminutive of stature with a weak constitution produce such an energetic document? Through more than 200 years, it stands like a silent sentinel to protect the freedom and independence of the American people.

It was a time when the Americans were weary from the tumult of the Revolution, but Madison’s job had barely begun. He realized it was up to him now to help fashion the future of a country that would outlive him.

Although characterized as introverted and pensive, Madison had a ferocious absorption to persevere until he could effectively shepherd the Constitution through all the logistical stages necessary to make it real.

In this Captivating History audiobook, you'll discover the story of his remarkable life from beginning to end.

This audiobook covers topics such as:

Listen to this audiobook now to learn more about James Madison!

What listeners say about James Madison: A Captivating Guide to an American Founding Father Who Served as the Fourth President of the United States of America

Perhaps the weakest book in the Audible library

There has not been a rendition of Madison so shallow and vapid. The author recites some details of Madison's life and a couple of historical events, but adds nothing of insight to the man or the times.
The reader speaks clearly but misses several words as never uttered before.
I'd ask for a return, but Audible seems to have revised their previous policy, making it difficult to arduous.

Very good, not too in depth.

It was very good for the length. It doesn't go too im depth, but it's a great Reader's Digest type book.

Excellent writing and enjoyable listening. Worthy of being recommended which I certainly will. Great expose of characters and historical events.

Madison lived a long life, blessed with the unwavering love and companionship of his wife, Dolly, and only marred, like Jefferson, by poverty at the end of his life.

Gives a good view of Washington and Virginia during the early years of the birth of this country. Wasn't as detailed as some other presidential books but would recommend to those seeking to learn about our 4th president.

Overall the book was excellent and I learned how great this seemingly quiet man was always tenaciously focused on anything he can do to safeguard his country. There were times when the writing got a little "twisty" where it was difficult to follow and I had to re-listen the paragraph over to understand it.

According to my expectations

Overall a very interesting account of his life and times and someone more Americans should know about. Recommended book.

This book has great information

This book helped really understand it's okay and to lay out different situations and how to better deal. Recommended read to better understand those who wear their heart on their sleeves as well as think differently.

I really loved the perspective that came out in this rendition of James Madison's life. It was a great reminder of Madison place in US history. It also was a very well written and interesting book.

What an excellent telling of a major, not minor statesman and president. Madison's role in framing our most precious document deserves all the recognition, even more than told by Lynne Cheney. What a interesting character. Well told by the author for sure.