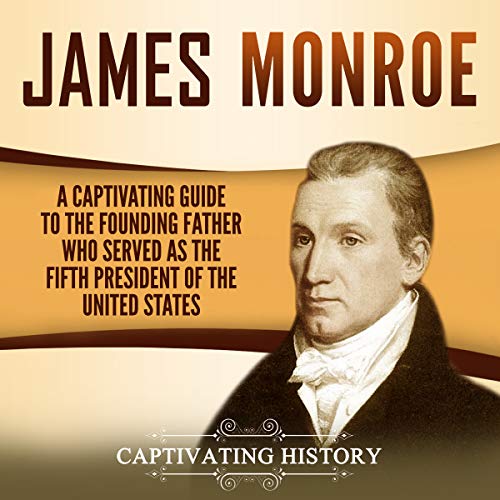 From plantation owner to diplomat to US president, James Monroe was known for his tenacity in pursuing what he thought was right, while also being honored for his fair policies, such as the Monroe Doctrine and policies to develop the country’s infrastructure. These traits were recognized in 1816, when the West African country of Liberia changed its name to Monrovia, in honor of James Monroe. It serves as the only international capital named after a US president and only one of two capitals in the world named after a US president - the other being Washington, D.C.

This captivating history audiobook covers topics such as:

So if you want to learn more about the remarkable life of James Monroe, listen to this audiobook now!

What listeners say about James Monroe

The book covers a lot of ground in a hurry.

A book does not always have to be as detailed as the great books I have just cited to be good. In fact, having read thus far, this book has made more clear some of the events I read about in the other books. Reviews are important. I read them to help me decide to purchase a book, but some reviewers give a distorted view of a book based on their own biases.

I found this very informative about the men/women of this time. I enjoyed learning how lives intertwined. Monroe's accomplishments have been over shadowed by the close relationship of Jefferson and Madison. I wish our students had the time and opportunity to learn in more detail of the building of our nation. Russia and Egypt are going through similar challenges right now. I would recommend this book to anyone interested in history.

Learn about Monroe in a relatively easy read.

Great book in great shape...enjoyed it fully! These founding fathers were something. Very enlightening reading. It is amazing they established our country with all the arguing they did. But they realized the nation came first. But slave owners fighting for rights and freedom was a bit hypocritical. It is great to see more of their personal lives, too.

Great If You Want A Quick Overview.

The book is exactly what most reviewers indicated: a good overview of Monroe's life and impact on history without tedious historical minutia. The author's opinions of previous president's to me but I got what I wanted to learn about Monroe in a relatively easy read.

Past US Presidents Facts

This book was concise and easy to read. The author did an admirable job of hitting on the key events of James Monroe's life. However, if you are a serious student of history this book is scant on serious details, which is to be expected when considering the length of about 3 hrs and 33 mins.

James Monroe and a Nation's Call To Greatness.

Monroe's Presidency was called the "Era of Good Feeling" for good reason, and this book covers that and much more quite well in a readable style.

The many foreign diplomatic positions Monroe held paid dividends both over there and here in the US. I am still amazed at the amount of travel these people managed to do at a time when it was not that easily done. I am also amazed at the lack of financial support the federal government gave the diplomats along with paltry pay. Many left government at the end of their service almost broke. Aren't we all richer for their dedication to their country? We all owe them a big debt yet today.

Fantastic read for early US history!

I'm on a personal reading adventure of US Presidents' biographies. This one gives the most comprehensive look at US history from per-Revolutionary War days through the broad expansion of the country with James Monroe's influence. With interesting writing style, the author brings the reader in contact with each of the Presidents from Washington to Jackson, gives insight to early international diplomacy, and the roots of the wonderful experiment of the republic of the United States of America.

A great founding father of the history.

Loved the book. Monroe is a very descent man who served his country and did so at personal expense. I only wish that in our own era of money-accuracy more politicians would look at Monroe's self sacrifice.

I rate this history book A+

I rate this history excellent, even though I think it less excellent than Ferling, The Monroe Doctrine marked the passage of the United States from a new nation to a powerful international nation, something I knew, but not in the detail that Unger presents. I am just a reader of history, not an expert, but I do think I'm qualified to recommend this history to others who also love the pageant of our history.