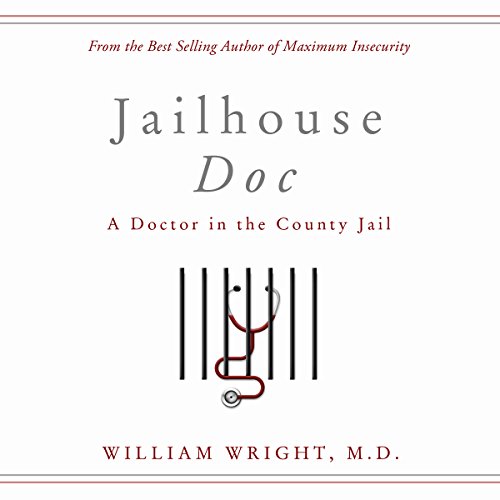 Jailhouse Doc: A Doctor in the County Jail

By: William Wright
Narrated by: Eric Martin
Try for $0.00

Dr. William Wright gave up a suburban practice as an ear surgeon to become the doctor at Colorado's maximum-security prison. After that, running a medical clinic at the county jail should be a snap, right? Oh, brother.

Hoards of desperate people fresh from the streets, homeless addicts, illegal aliens, and gangbangers all ruled by a corrupt sheriff and his concubine sidekick made the supermax look almost pastoral.

Told with humor and biting wit, Jailhouse Doc follows Dr. Wright and his struggles with scamming inmates, corporate bureaucrats, and a sheriff who wants to be a doctor.

Peek behind the bars at the operations of a city jail and the daily battles to deliver medical care to a population on the edge.

What listeners say about Jailhouse Doc: A Doctor in the County Jail

Of course I enjoyed this book. I am a nurse who enjoyed working in the jail and House of Corrections for one Sheriff's Dept, and in a different jail in another county after relocating. I was intrigued by his perspective as MD accustomed to serving solvent clients as opposed to the indigent. I can't comment on the prison experiences, only the jail ones. I will admit to being disappointed that he did not mention that approximately 25% of jail residents (regardless of jail size) are the truly mentally ill (as opposed to 'situational depression' of having gotten caught), but gratified that the issues around chronic overcrowding were exposed. I am sorry for his experiences with the politics of corrections, but very pleased that he exposed the issue. It can happen anywhere.
I feel that this first person account was very well written and provides a cautionary tale to the readers.
Eric Martin gave an excellent audio performance! Truly captured the emotional responses of the writer to so many new experiences and outrages.
"This audiobook was provided by the author, narrator, or publisher at no cost in exchange for an unbiased review courtesy of Audiobook Blast."

What did you love best about Jailhouse Doc: A Doctor in the County Jail?

I like Dr. Wright's combination of humor, compassion, and no hidden agenda. He gives an honest description of the conditions and people within the jail, both prisoners and staff. Dr. Wright gets real on a variety of topics, some of them very important. I find it refreshing to read an upfront, honest bit of autobiography like Jailhouse Doc. And Dr. Wright's writing style is just "right" for his stories. (Couldn't resist. Three cheers for bad puns!)

Uh...isn't this question redundant, given the preceding question?

Which character – as performed by Eric Martin – was your favorite?

This isn't that kind of book, really, since these are all real people and not characters.

In Maximum Insecurity, Dr. Wright described his years as a prison doctor. Here, in Jailhouse Doc, he describes a surprisingly different experience as doc in a jail setting. I thought both books were terrific. There's something quite special about people who are willing to care for folks whom the rest of us would cross the street to avoid--and with good reason. If you'd like an entertaining and enlightening listening experience, Jailhouse Doc is the ticket. But you might want to start with Maximum Insecurity. I'm glad I listened to both in chronological order. Made more sense, better flow and all that. I can't end this review without mentioning the excellent narration by Eric Martin. His talents were perfect for this book.

After listening to Maximum Insecurity, I knew for sure that I absolutely needed this book in my library as well. It is just as good as the first title, and I had the same amount of laughs!
Dr. Wright really captures the differences in facilities (maximum security vs country jail), but I don’t think it is necessary to have read Maximum Insecurities first, though I highly recommend that book too. There is more of a focus on administrative issues in Jailhouse Doc, more so than on the inmates, but it is still very informative and entertaining. Dr. Wright is a very likable a person and an incredible writer, and Eric Martin’s performance is top notch. Overall, this is a high quality audiobook that will make a great addition to anyone’s library!

I thoroughly enjoyed Jailhouse Doc. I like the author's sarcasm in describing his patients while caring for them as humanity in general. The chapter on illegals was fascinating. I have employed many Mexican and Guatemalan immigrants and love Hispanics in general. (I live part time in Mexico.) I employed them years ago and spent many a Sunday extracting them from whatever jail housed them for the weekend. Now I plan to read Dr. Wright's first book.

I so enjoyed this book. It has many LOL moments and some Ewwwwww (guy w/jaw wired) ones also. But for me what I got out of these great stories is at the core Empathy. This Doctor has it in spades!

From the very beginning I knew I would have to listen to this at least twice. Very few books are on that list for me.

This doctor takes you thru his job at the county jail in a way that shows you how hard (and sometimes shocking) it is for the people that are in the system, and for those that work within the system. He gives many descriptions of things that need to be done for the better, as well as people who need NOT be working in this type of facility. And all this with humor and honesty.

I imagine this doctor as a Country Doctor, the kind that takes the time to listen, does not judge and WILL call you in a few days after the visit to check on you (with or without the Aspirin).

A dark comedic look into the jail system

Dr Wright recounts his misadventures working as a medical doctor in a country jail. The book tracks through his time in the jail system, from how he moved out of being an unfulfilled private practice doctor through the trial and eccentricities of the system to his eventual placement on 'unpaid indefinite leave' due to not playing politics.

Wright tells some interesting stories or how the system works (or in many cases doesn't) because of red tape, limited time with patients, patients that don't any help, patients looking for drugs (or sex or money or weapons), cost limitations, or people just thinking rules don't apply to them.

He also touches on non-doctoring related items, covering some general details of life in prison such as how create makeup out of the typical items found in a jail.

Mixed in with this is poignant and interesting details on the issues facing the US jail system such as overcrowding, inability to get good staff etc. While he admits he doesn't have all the answers he certainly makes suggestions on how things could be improved, while admitting that sometimes you can't help people who don't want help.

The balance between the 'hard' moments and the funny is often a difficult one to get, but Wright does it really well. Never did I feel like I was overwhelmed by how bad the system was but never were we able to forget how messed up it was.

The narration by Eric Martin brings the book to life. He conveys the emotion and humour of Dr Wright well. He also performs the characters we meet in the jail, distinguishing each one with voices and accents, while never overdoing it.


This audiobook was provided by the author, narrator, or publisher at no cost in exchange for an unbiased review courtesy of audiobookblast dot com.

What made the experience of listening to Jailhouse Doc: A Doctor in the County Jail the most enjoyable?

The narrator gives a very good performance. He sounds just like you would imagine the doc. The sound quality is excellent.

It manages to give a real social critique of the jail system while remaining light and entertaining. That is a hard balance to achieve, but this book pulls it off perfectly. It also gives an inside look at what everyday life is like for the prisoners and manages to make it amusing. For instance, "how to achieve glamour in jail" or "how to make booze in jail."

What does Eric Martin bring to the story that you wouldn’t experience if you just read the book?

He brings the characters to life and makes them even more memorable. For instance, the colorful Hispanic dental assistant, or some of the illegal immigrants, or the prisoners' mothers who call the doctor up to make sure he is treating their sons well; he captures them perfectly.

What some people will do for free healthcare.

I liked the thought provoking aspects of the 2nd half.
We definitely need reform in our judicial and incarceration programs in the U.S.

I liked hearing about a physician treating prisoners. I’ve listened to both of his audiobooks. His description of the derelict jailhouse incarcerated had a “glad I’m not that guy” type of shock value.
His cynical descriptions of incarcerated adults were memorable because they do reinforce our collective idea of the scheming liar drug seeking guy. But only the weird and extreme patients are mentioned which I believe (I wasn’t there) is not all together typical, at least I hope not. Besides, who wants to read about a doctor’s appointment that goes routinely.
There is a lot of contempt in those descriptions. I’m sure it is well earned but I was sorry to hear about that nonetheless. He also has contempt for the bureaucrats and the system they work in and oftentimes uphold. That part sounded like any entrenched bureaucracy I’ve heard about.
Overall the cynicism was amusing and this autobiographical book is entertaining as well as informative.

I want to thank the author for taking the time to write your experience and opinions to benefit the rest of us. The reason I bought your book was that I was hired by a corporation to be mental health director and I wanted to know what is like so I go in with my eyes open. You sound like a wealth of information and wisdom and also wit. Thank you. This book was like having an interview lunch to find out "you got what it takes?". Funny I wonder if I got the job because I was good or because they are desperate lol. I will find out. Thanks again. I highly recommend this book for anyone any service line that wants to know a glimpse what's like to work there and where improvements are needed and if you want to be part of the problem or part of the solution.