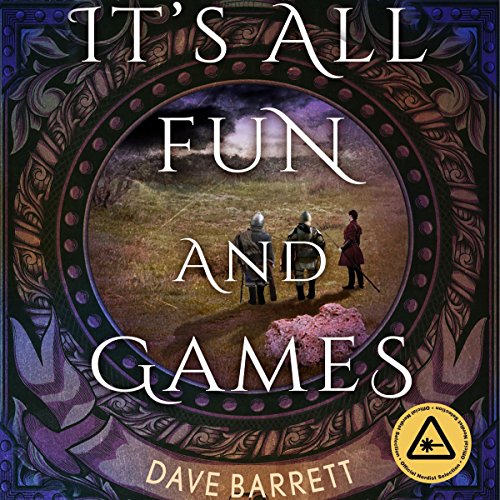 It's All Fun and Games

It's All Fun and Games

When Allison's best friend, TJ, convinces her to come along for an epic game of LARP (live-action roleplaying), she reluctantly agrees, despite her reservations about the geeky pastime. TJ's weekends are filled with powerful wizardry, mystical creatures, and intense battles with his LARP group. Each adventure is full of surprises, but the goal is always the same - to defeat the monsters and find the treasure.

Not long after their quest begins, the friends discover that something has gone wrong. The fantasy world they've built has transformed, and the battle they're in the midst of is no longer make-believe.

Now they must fight for survival against brigands, kobolds, and other deadly mythical creatures that come to life. Fortunately, the group's once-fictional magical powers have also become real - including Allison's newly acquired gifts as a healer. They'll need everything in their arsenal if they hope to make it home alive.

"What would I do if my favorite fantasy world came to life? It’s a question every nerd has asked him or herself, and Dave Barrett answers it in a tremendously fun, well-written story of swords, sorcery, and survival." (Dan Casey, Senior Editor of Nerdist)

This book is a fun read that is good for the whole family. if you're looking for a new author, you found your guy. Dave brings life to the characters, with a wonderful storyline.

I loved this book in print and I love it even more after listening to the audio book. having a female narrator brought me closer to the characters. Her voice helped me connect with the material more intimately.

I really enjoyed the narrator. She is a terrific voice actress and lovely narrator. I hope she does book two.

I'd recommend this book to anyone who is mesmerised by fantasy and loves a great plot.

The performance by Cassandra Morris was fantastic and couldn't have been better.

Only reason there's no fifth star to 'Story' is because it left me wanting more, if there is ever a continuation I promise full reviews.