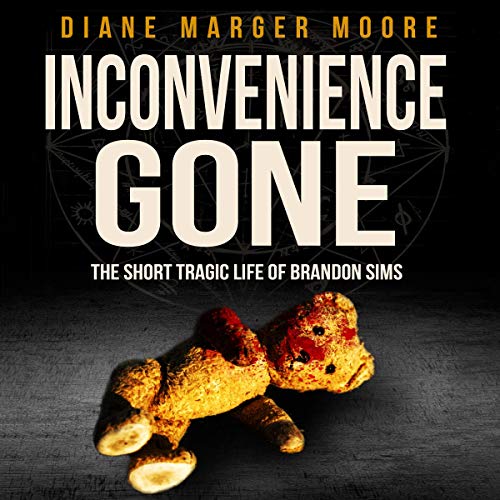 By: Diane Marger Moore
Narrated by: Chris Monteiro
Try for $0.00

Where is Brandon Sims?

The four-year-old had not been seen since July 3, 1992, when he attended a birthday party with his 20-year-old mother, Michelle Jones. Jones was employed, confident, talented, smart, assertive, and involved in many community activities in Indianapolis, Indiana. In contrast, when he was last seen, Brandon Sims, an only child, was a serious, quiet, thin boy who rarely maintained eye contact with his mother. After that night, he was never seen again. His body has never been found.

For years, Jones lied to her friends about Brandon, telling some that he was living with his father and others that he was staying with his grandmother in another state. When Brandon’s father, who had been in jail, came looking for Brandon, Michelle’s shocked friends confronted her.

She confessed that Brandon was dead. She repeated her story of how Brandon died to a detective, after she admitted herself to the local psych unit. Days later, she checked out of the unit and refused to reveal where she had hidden Brandon’s body. She was sure she had gotten away with murder.

And she would have, except the detective didn’t believe her story. He enlisted the help of a novice prosecutor because no experienced prosecutor would take the case. In Indiana, no one had ever been convicted of murder without a body.

That prosecutor has written a story that reads like a mystery novel instead of the real murder prosecution. Truth is stranger than fiction where Santeria curses; the law and politics are only a few of obstacles to justice.

What listeners say about Inconvenience Gone

I was drawn to this story because I am a native of Indianapolis. I could picture all of the places mentioned. The story was well written and narrated.

Title of book says it all 🧸🧸

I was disappointed w/the writing of this book as it was very repetitive . I found it difficult to follow storyline with the various individuals, not to mention the key people involved, I believe this awful, UNFORGIVING sin inflicted upon this baby needs to be told and certainly out there for ALL to know about especially when considering the fact that this disgusting INDIVIDUAL is now out of prison and FREE TO INFLICT HARM ON ANOTHER CHILD ..to myself and others that I know to have read this book ..this is sickening to the soul beyond anything that a NORMAL human can comprehend!! I would like to add that I am a child of abuse , abuse beyond much of what I’ve listened to in the books here on Audible .. now I’m not saying that as a competition of such as I believe ANY AND ALL ABUSE inflicted on a child should be punishable.. however what I am saying is how sick I am of hearing that because a person was abused that gives them the “OUT” so to speak an excuse of sorts as to why they do the same to another child... BS . BS , I call BS !! I would never EVER think of harming a child in any manner!!! I do agree w/YALEs decision in REJECTING her submission to their establishment, and I can only pray that others follow this example!!
To put it in other words .. we wouldn’t hire a sex offender to work in a day care or any other arena or event that involves children ...would we?
We wouldn’t hire a bank robber to work in a bank .. would we?!?!
At least anyone w/a moral compass, conscience , ethics/background etc..wouldn’t!!
A person who can harm , kill , molest , beat , degrade, and any other form of hurtful acts upon a child should never have the opportunity to do it AGAIN!! ONCE IS ENOUGH , THEY NEED TO BE PLACED IN AN ENVIRONMENT AWAY FROM THE PUBLIC !!!
Just think about this... WHAT IF IT WERE YOUR CHILD, NIECE , NEPHEW, GRANDCHILD ETC...

First to get it out of the way: It's an odd experience listening to a male voice reading a woman's first-person account of her own experience. Couldn't get used to it. It wasn't consistent with the author's phraseology and tone, and it was a major distraction to the story. A bad choice on someone's part, including the narrator.

After this listening experience, I've already rejected another Audible book written as a man's first-person account of his own experience, but read by a woman. Too much distracting dissonance between the voice and the story.

I rated Inconvenience Gone with only 2 stars = "it's ok", because despite a story the could have been compelling, "ok" is all it is. This is the lowest rating I've given an Audible book that I didn't return.

The author-prosecutor tells a story about her own legal tactics, not the 'why's' behind this tragic crime. The lack of in-depth background research and a fuller insight into the defendant and her life is an acute failing. A fuller account of someone who worked so hard to rise above her past and achieve considerable success at a young age, only to turn on and murder her only child, and then hide the crime for years, would be a riveting story, indeed.

This is not that story.

The account of the crime comes down to a bare and spare "this is what happened (probably)". Instead, the author presents a fairly solid march through the administrative side of a prosecution, from reading investigator's reports, to filing charges and eventually to trial and sentencing. There are weak attempts to personalize it with sandwiches and lunch conversations, but even then she admits to having such a lack of connection with the primary investigator that she can't even give us his own remarks about what he thought.

No deeper research is offered to give a more complete picture of the defendant's life story starting from childhood: how family and friends knew her from a child into adulthood; her motivations and dreams for her life; why she continued moving through her changing cast of boyfriends and social circles; and how a child fit - or didn't fit - into her plans. Even the witness interviews were primarily done by others in law enforcement to get sufficient facts to build a case. We are left to guess and surmise the intrinsic, human details ... as the author does.

In short, this true-crime book is far, far short of the quality of work done by insightful true-crime authors such as Jack Olsen, Erik Larsen, Richard Lloyd Parry, Ann Rule and prosecutor Vince Bugliosi. If you are looking for that level of quality, this is not that book.

Most unfortunate of all is that there is nothing directly from the defendant herself, until near the end. And even that was gleaned from a report and not from a real true-crime author's carefully-forged connection and conversation with the young woman who literally sacrificed her child to her ambitions. Without her own voice, our view of this young woman is limited to what witnesses said about her whereabouts and what she said to them.

It seems that the author-prosecutor is so interested in her own story that she has little real interest in the defendant, beyond winning at trial.

In fact, the prosecutor-author states that she never even heard the defendant's voice until *after* the trial and the guilty verdict, until the sentencing process was ongoing! She seems to have had no contact with the defendant other than prosecuting her in the courtroom while the defendant sat silent.

Whatever excuses the author can offer for failing to truly tell this story with more research, nonetheless, what she does have is not enough for a book, in this listener's opinion.

not a huge fan

Struggled to finish. The story is fascinating but the style it's written is boring. It was hard to finish.