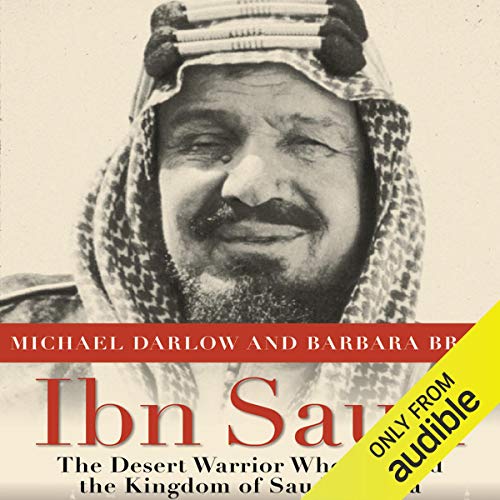 By: Michael Darlow,Barbara Bray
Narrated by: Brian Bascle
Try for $0.00

Ibn Saud grew to manhood living the harsh traditional life of the desert nomad, a life that had changed little since the days of Abraham. Equipped with immense physical courage, he fought and won, often with weapons and tactics not unlike those employed by the ancient Assyrians, a series of astonishing military victories over a succession of enemies much more powerful than himself. Over the same period, he transformed himself from a minor sheikh into a revered king and elder statesman, courted by world leaders such as Churchill and Roosevelt. A passionate lover of women, Ibn Saud took many wives, had numerous concubines, and fathered almost one hundred children. Yet he remained an unswerving and devout Muslim, described by one who knew him well at the time of his death in 1953 as “probably the greatest Arab since the Prophet Muhammad.” Saudi Arabia, the country Ibn Saud created, is a staunch ally of the West, but it is also the birthplace of Osama bin Laden and 15 of the nineteen 9/11 hijackers. Saud’s kingdom, as it now stands, has survived the vicissitudes of time and become an invaluable player on the world’s political stage.

“An entertainingly exhaustive, though imperfect, biography of an inscrutable monarch.” ( Kirkus Review)
“ Darlow and Bray convey the essence of the man as well as the stark, unforgiving landscape that he mastered while forging a nation.” (Jay Freeman, Booklist)
“All in all a successful narrative, though overlong on military exploits and personal vignettes and short on analysis of the massive changes in Arabian society.” ( Publishers Weekly)

What listeners say about Ibn Saud

Short-est Way to Learn about the Modern Day Saudia

Twenty one hours of listening to this book is the shortest way to educate oneself on the history of the modern state of Saudi Arabia. Despite the fact that I had some idea of Abdul Aziz Ibn Saud's raids and conquering of territory, it wasn’t the complete story nor made much sense. Thanks to this book which not only filled the void but actually went beyond: it filled it to my delight.

This book covers in detail the entire history of the tribes, the politics, the fighting within and without which spanned the Arabian peninsula from 1890 to 1957 with Abdul Aziz (referred throughout the book as Ibn Saud) taking the central role. It covers all aspects of Ibn Saud – his soldierly spirit, his fighting strength, his political maneuvering, yet not overlooking his personal failings. It was only after reading this book that I was able to get an idea of how the oil wealth has been and is being consumed by the House of Sauds. I could hardly believe that in 1950s two-third of the income from oil went in to serving the lifestyle and needs of the self acclaimed Royals. There is also ample humour and stories to give the reader enough chuckles. Ibn Saud’s marriages and his losing account of how many wives he married: his insistence of taking sheep aboard USS Murphy (to which the US Navy relented) enroute for his meeting with President Roosevelt aboard USS Quincy provide for a fair amount of light reading.

Any Muslim or a non Muslim, an Arab or otherwise who intends serving anywhere in the Arabian peninsula would find himself enriched reading this book and better equipped in knowledge to serve in Saudi Arabia or the Emirates.

A Captivating Portrait of the Man and His Times

What did you love best about Ibn Saud?

This work feels like it was meant for Audible. During the several days it took me to finish listening, I never felt bogged-down by names, dates or factoids. Instead, the author gives us almost lyrical descriptions of the Arabian landscape and paints a living portrait of Ibn Saud as well as figures instrumental in his rise to power. The book is filled with entertaining anecdotes and personal details that help the reader/listener become emotionally invested in the narrative.

I was impressed by how accessible and easy to follow the narrative Was considering the vast scope of the work. Beyond covering the life of Ibn Saud, this work goes into great detail on Bedouin customs, the formation of Islam and the geopolitical climate of the era. Even though they wern't central to the story, I felt like I better understood the importance of figures such as T.E. Lawrence, Churchill and the Hashemite kings in shaping the modern Middle East after finishing this work.

Which character – as performed by Brian Bascle – was your favorite?

This wasn't that kind of book, but if I had to pick a favorite person portrayed in the narrative it would be Captain William Shakspear. He seemed worthy of the veneration that figures such as T.E. Lawrence were later to inspire more through publicity than by actual exploits.

Yes, it was that good.


Certain passages of this work, especially of those related to Ibn Saud's personal religious beliefs and his control (or lack therof) on some of the more fanatical Wahabis in his service seemed a bit biased. But no book is perfect.

I enjoyed this book about one of the greatest Arab leaders in the modern world, however it seems to me that like every book looking in from the outside, it misses some facts and misinterprets/misunderstands some others.

Informative history of modern Saudi Arabia and the major players and events in its development.

I found the story to be very educational and engaging, but the narrator’s robotic way of speaking and terrible pronunciation of Arabic very distracting

Finally, I have a basic grasp of the Middle East

Before listening to this book, I knew nothing about Saudi Arabia and the Middle East, other than popular news media reports of various conflicts. I can now see that things are not black and white in the region, and that only the people who live there can resolve their problems. I am now eager to follow the progress of what happens next.

Avery interesting to read and learn about the recent history of Saudi Arabia. I had a problem understanding the pronunciation of the Arabic words and names of places. This made hard for an arabic speaking person to relate them to his knowledge of saudi history.

Can anybody tell me is they call Gertrude Bell in this book “ Shakespeare “??? Why would that be so

Excellent historical background for insight into today's (2019) Saudi Arabian culture and challenges. Worth your time.

Enjoyable and instructive despite the flaws

Despite frequently painful pronunciation, fair treatment of the Kingdom of Saudi Arabia and demonstration of the consistencies along the arc of the Saudi story make this a very enjoyable book.