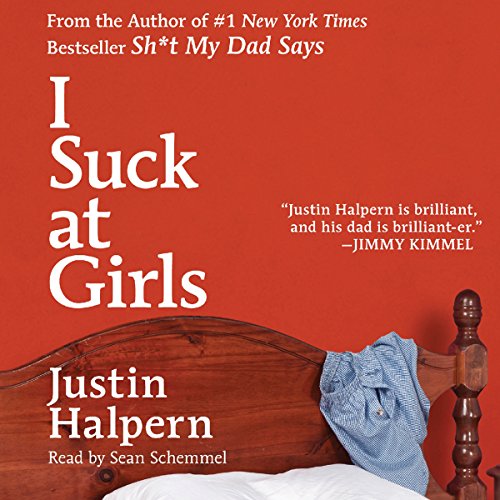 I Suck at Girls

By: Justin Halpern
Narrated by: Sean Schemmel
Try for $0.00

"Human beings fear the unknown. So, whatever's freaking you out, grab it by the balls and say hello. Then it ain't the unknown anymore and it ain't scary. Or I guess it could be a shitload scarier."

Fans of the number-one best seller Sh*t My Dad Says will recognize the always patient voice of Justin Halpern's dad as it crackles through this hysterical new audiobook. The story begins when Justin announces that he's decided to propose to his girlfriend. "You've been dating her for four years," his dad replies. "It ain't like you found a parallel f**king universe."

But eventually he gives Justin some advice: that he should think back over everything he's learned in life about women, relationships, and himself before making his decision. And that's just what Justin does—revisiting everything from his disastrous childhood crushes to the night he finally lost his virginity while working as a dishwasher at Hooters.

Full of his dad's patented brand of wisdom, it's also full of new characters just as funny—from his brother, who provides insights into wedding night rituals, to his first boss, who warns Justin to man up: "That's what a man does. He takes his shots and then he scrubs the shit out of some dishes." The result is a pilgrim's progress through the landscape of sex and love—by one of the funniest writers at work today.

What listeners say about I Suck at Girls

The Dad is side-splitting funny

This book is hysterically funny for the first half and just plain funny in the second half. The father's advice is uproarious and the counter point of the mother just can't be topped. I was on a crowded Amtrak train coming back from NYC and I was laughing so hard, I thought the conductor was going to put me off midway. This book is really about the travails of the author finding and figuring out whether he should or should not propose to his girlfriend.

This book is going to appeal far more to men than to woman. It isn't that the book is sexist, it's because it written from a very male point of view. Think sophomoric humor. If you like that type of humor and gutter language, you'll be fine.

For me, I found it funny. If you liked his first book and the TV show, you'll like his second. Thumbs up.

Not as good as Sh*t My Dad Says

Would you try another book from Justin Halpern and/or Sean Schemmel?

Would you listen to another book narrated by Sean Schemmel?

Do you think I Suck at Girls needs a follow-up book? Why or why not?

No. It tied itself up nicely.

Where does I Suck at Girls rank among all the audiobooks you’ve listened to so far?

One of the funniest books I've purchased.

The voices for the alternate characters were hard to take. Some sounded very cliched and others sounded too much like very bad south park impressions. The voice for the main character was perfect and the father was okay, but everyone else was hard to take.

I was regularly laughing while listening to this book!!! I recommend this to anyone who is looking for an easy book to get hooked on.

Story of an insecure man chasing women. Funny and gets funnier as it goes along. Advice from his crusty dad will crack you up. The reader sounds like Paul Rudd. It made laugh out loud a few times. I like it enough to seek out other books by Halpern.

The story was good, hard to follow the first book but still funny. I was disappointed in the cheesy dad voice was too much...

The voices were so annoying. I felt like I was watching South Park...not in a good way.

Wanted more of his dad in the book. If was funny, but not want I was expecting.

This is an absolutely hilarious book. It was brilliantly written and performed wonderfully. I would absolutely recommend to anybody that also enjoyed “Shit my dad says”. Justin Halpern has a great sense of humor that makes you want to keep listening!

Fun stories just a bit odd hearing the voice of Goku for Justin in his 20s.