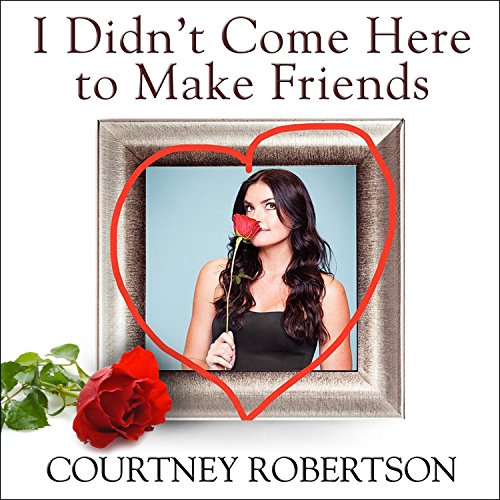 Courtney Robertson joined season 16 of The Bachelor looking for love. A working model and newly single, Courtney fit the casting call: She was young, beautiful, and a natural in front of the cameras. As the season unfolded and sparks began to fly, it became clear: She was not there to make friends. Courtney quickly became one of the biggest villains in Bachelor franchise history. She unapologetically pursued her man, steamrolled her competition, and broke the rules. Now, after a very public breakup with her Bachelor, Ben Flajnik, Courtney dishes on life before, during, and after The Bachelor, including Ben's romantic proposal to her on a Swiss mountaintop and the tabloid frenzy that continued after the cameras stopped rolling. Complete with stories, tips, tricks, and advice from your favorite Bachelor alumni, and filled with all the juicy details Courtney fans and foes alike want to know, I Didn't Come Here to Make Friends is a must-listen for every member of Bachelor nation.

What listeners say about I Didn't Come Here to Make Friends

As a Bachelor fan, this hit the spot as a guilty pleasure. Courtney really doesn't hold back, and is still as mean and shallow as she was on the show.

Would have been a nice touch to have the others who contributed to the book read those chapters.

What made the experience of listening to I Didn't Come Here to Make Friends the most enjoyable?

I couldn't stop listening. Started when I went on a run and ended up running 6 miles so I could keep listening.

The narrator has a very pleasant voice

My own voice had more enthusiasm than hers

No. The only relevant aspect of her life is her story about being the chosen one on Bens season.

I read this book on my own first and loved it. I was surprised about Courtney's lack of diversity in her pitch. It's like she's reading someone else's story. There just wasn't any expression in her voice - it was monotone

I am a big fan of the Bachelor Nation. I did not like Courtney in Ben's season but felt her pain at the Women Tell All show when the girls gang up on her.

I couldn't stop listening to her book. Very intriguing!!

Pretty good but ONLY for Bachelor fans

STORY (reality show confession) - So I must admit I'm a fan of the Bachelor and Bachelorette series. I will also say right up front that I didn't care for the choice of Ben as the Bachelor and I was one of millions who disliked Courtney, the author of this book, who is the girl Ben proposed to at the end of the season.

Anyway, I listened to this book hoping to hear the inside track on what goes on while filming the series. I learned some interesting tidbits and also heard some juicy gossip about past contestants, but I had to endure a lot about Courtney's early years, her introduction to sex, her modeling career and her name-dropping of famous guys she dated. She also gives details of her venomous relationships with the other contestants during filming, as well as a blow-by-blow account from the moment she met Ben, through their engagement and ultimately the failure of their relationship about a year later. It's her book, right, so this was her chance to vent about Ben and try to explain why she appeared like such a stuck-up b1tch on the show. All in all, I enjoyed the book, but would have preferred less Ben and way, way less Courtney.

PERFORMANCE - Courtney reads the book herself. I suppose it was good to hear her tell her own story and she does an okay job.

OVERALL - Recommended only for serious Bachelor fans and/or people who like Ben and Courtney. Some cursing and descriptions of sexual acts.

This woman is TERRIBLE

This book is supposed to show she’s actually a good person? 🤣😂🤣
OMG!!!
She is terrible. She calls women sluts and hoes and worse. She has no concept of what actual work is (not because she’s a model but because she never put effort into anything. If she hadn’t been born pretty she’s be homeless. She has no work ethic).

She’s horrible to women but she’s just as shallow and awful to men. If you don’t have a ton of money and a HUGE penis you aren’t worth her time or even civility.

I wanted to believe that the Bachelor producers made her seem horrible. I wanted to give her a chance. I think they might have been trying to make her look better and that’s the best they could do.

Not only is it hard to listen to Courtney’s voice, but her life just isn’t interesting ¯\_(ツ)_/¯
I got through half of the book, and decided to stop. I normally force myself to finish my books, but I just couldn’t with this one :/

I wish she would have paid for real narration.

The story was good and kept me interested but the narration was painful. It’s basically like having a story read to you from audible. There wasn’t any inflection, character changes, etc. she literally just read it and it was obvious as such. I was interested enough in the story to keep going thankfully, but if the story was just ok, I would have quit in the first chapter or two.

Annoying, winey, and too long

Way too long and drawn out. Her annoying, monotone little girl voice does not help. If you want to hear how she thinks she is a prude yet practiced giving blow jobs in the park and slept with the bachelor way before the fantasy suite this is for you. It's just another one of these bachelor contestants who acts so shocked that the "relationship" did not work out. It's also more about her growing up and her man hater mother than the show.

I love the raw realness put into this book. I felt like I was with Courtney along the entire Bachelor experience and loved hearing about her childhood and past relationships.