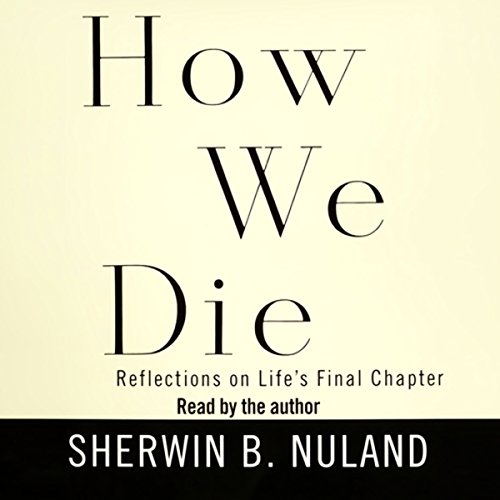 There is a vast literature on death and dying, but there are few reliable accounts of the ways in which we die. The intimate account of how various diseases take away life, offered in How We Die, is not meant to prompt horror or terror but to demythologize the process of dying, to help us rid ourselves of that fear of the terra incognita.

Though the avenues of death, AIDS, cancer, heart attack, Alzheimer's, accident, and stroke, are common, each of us will die in a way different from any that has gone before. Each one of death's diverse appearances is as distinctive as that singular face we each show during our lives. Behind each death is a story.

In How We Die, Sherwin B. Nuland, a surgeon and teacher of medicine, tells some stories of dying that reveal not only why someone dies but how. He offers a portrait of the experience of dying that makes clear the choices that can be made to allow each of us his or her own death.

"Drawing upon his own broad experience and the characteristics of the six most common death-causing diseases, Nuland examines what death means to the doctor, patient, nurse, administrator, and family. Thought provoking and humane, his is not the usual syrup-and-generality approach." (Booklist)

What listeners say about How We Die

I didn't notice until I downloaded it that it's an abridged version. This is not the type of book, in either length or content, that can benefit from being abridged.

Would you recommend How We Die to your friends? Why or why not?


I would definitely not recommend the audiobook, buy the hardcopy instead.

Similar to reviewer Wisefool, I didn't notice that this is a very abridged version until it ended after the 3rd chapter. The original book is 12 chapters + epilogue, so what your getting here is 1/4 of the book which isn't that long (270 pgs) to begin with. Widefool calls it a ripoff, and I agree.

I have a difficult time dealing with loss and didn't expect to like this book because I thought it would just be too sad; but I did enjoy it. Very different than what I was expecting. Helpful to anyone. A must-read for health care professionals.

Required reading for those still breathing

This book places the responsibility for living and dying where it should be placed, firmly with the individual in process.The suggestion that modern western medicine can and has made life easier is countered with the fact that sometimes, it can prolong life too far, and then allows more suffering than was necessary. It is up to each person to decide whats enough. Thats a hard choice, when you begin to balance what others want, who you will dissapoint,and so on.A very thought provoking look at death in its visceral form, sometimes messy, emotionally charged, very human.

this is a fabulous book and I have read the hard copy. I bought the audible version as I was dealing with the death of a family member and I wanted to be reminded of Dr. Nuland's words regarding her malady. This version cut out that part of the original book. Do your self a favor, skip this and buy the hard copy.

The author tells the story of death through case studies. The first two case studies deal with sudden death by myocardial infarction (heart attack) - one resulting in death, the other saved by CPR. There is a no sugar coating of the facts, just a very careful and illustrative accounting. My first two takeaways were improve my eating habits and to teach my kids CPR so that I may survive my "golden hour" if I have a heart attack. The author then dispels the "died of old age" myth and describes the the telltale, small signs of decline in aging. I think the factual approach is refreshing. I was unprepared for death of my father that died similar to his grandmother. I was unprepared for the death of my father-in-law that died like his very first patient. This book not only prepares you for these realities but also offers a cautionary signs to help you avoid an early end. This book is not the subject of the teen set perhaps. But anyone with parents over 50 would do well to read it or just be surprised by inevitable events later.

As this text is a required reading for a course, I found it convenient to purchase the Audio version. However, it has become clear (after also purchasing the text) this audio lacks details. There are entire sections missing that completely disjoint the stories told. This is a disappointment.

This is a modest book, but one in which Dr. Nuland, reading his own work, expresses a clear viewpoint as a physician familiar with every aspect of How We Die. Using various professional anecdotes and personal stories to illustrate the need for change in our approach to dying, Nuland posits that doctors and families need to be honest with their patients and loved ones about the approach of death. Only by offering the dying patient honesty, rather than false hope, Nuland believes, can we spare them unnecessary and ultimately futile treatments, and allow them to prepare themselves properly for death, surrounded by their loved ones, "so that our last moments will be guided not by the bioengineers, but by those who know WHO WE ARE (emphasis Nuland) ."

Nuland repositions death as more than just the final moment marking the demise of a particular individual; he urges acceptance of death as a natural and ever-repeated stage in the eternal cycle of life, as a gift the dying person can give to the new generation, without which new life cannot thrive. He sends out an urgent call for revision of our attitudes towards death, for funding for new facilities and education for professionals who thus will have better expertise in this area, and for what we might now call hospice care, so that, rather than "sequestering the dying", "no man will be left to die alone." How We Die is compelling, timely, and, in spite of its daunting title, uplifting. It's worth a listen.

Did How We Die inspire you to do anything?

Rethink my own attitudes towards death and dying.

At first, I found Dr. Nuland's reading style a little over the top. His writing at times is a little fulsome (for e.g. I found it a little fussy to refer to a dying person as a "groundling" at the metaphoric 'performance' of his own death, in which he ought to be the 'principal player.'), but overall Nuland seems very sincere and I grew to like him more and more as he went on. In the end he won me over with his thoughtfulness and sincerity.

Finely written and a good read.

Amazon should do BETTER! The audiobook is incomplete

There’re a few missing chapters in the book. I read this book for class and I was lucky to find out that there is some missing chapters before it cost me any points. Amazon should do Better!