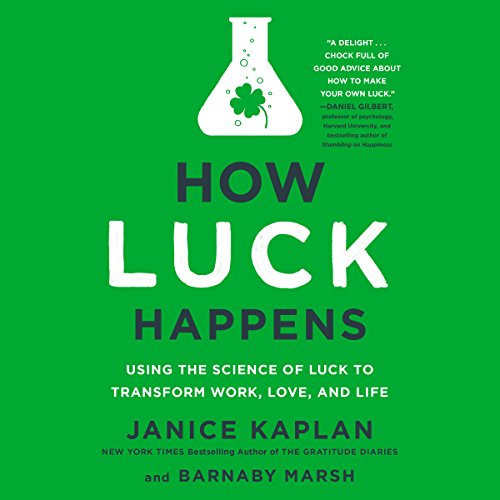 New York Times best-selling author Janice Kaplan examines the phenomenon of luck - and discovers the exciting ways you can grab opportunities and make luck for yourself every day.

After spending a year researching and experiencing gratitude for The Gratitude Diaries, Janice Kaplan is back to tackle another big, mysterious influence in all our lives: luck. And this time she's joined on her journey by coauthor Dr. Barnaby Marsh, a renowned academic who guides her exploration.

Together they uncover the unexpected, little-understood science behind what we call "luck", proving that many seemingly random events are actually under your - and everyone's - control. They examine the factors that made stars like Harrison Ford and Jonathan Groff so successful, and learn the real secrets that made Kate Spade and Warby Parker into global brands. Using original research, fascinating studies, and engaging interviews, Kaplan and Marsh reveal the simple techniques to create luck in love and marriage, business and career, and health, happiness, and family relationships. Their breakthrough insights prove that all of us - from CEOs to stay-at-home moms - can tip the scales of fortune in our favor.

Through a mix of scientific research, conversations with famous and successful people - from academics like Dan Ariely and Leonard Mlodinow to actor Josh Groban - and powerful narrative, How Luck Happens uncovers a fascinating subject in accessible and entertaining style.

“A delight...chock full of good advice about how to make your own luck.” (Daniel Gilbert, Professor of Psychology, Harvard University, and best-selling author of Stumbling on Happiness)

“A game-changer! Clear, smart, and elegantly written, How Luck Happens is an ingenious treatise on how to make your own luck. I was transfixed, and now have a pile of science-based strategies to make my dreams come true. You will too.” (Helen Fisher, Research Fellow, The Kinsey Institute, and best-selling author of The Anatomy of Love)

“Finally! A thoughtful book that shows how people are able to generate an abundance of luck for themselves and others. Read this book to open your mind and heart to new possibilities and most importantly, the chance to start making a luckier world.” (Deepak Chopra, best-selling author of The Seven Spiritual Laws of Success and You Are the Universe)

What listeners say about How Luck Happens

Despite the title, not science-based

I only managed six chapters. Although mildly entertaining, this is not, in fact, a science-based treatment. It could more accurately be described as an ad nauseam string of anecdotes all repeating what Louis Pasteur once wisely noted: that chance favours the prepared mind.

I am Lucky that I have read this book

Luck is something which some people have in abundance while maximum people never feel it's presence in their life.But the truth is that luck can be created in your life if you really want it. There are mainly 5 big takeaway from this book which you should follow in your life.


1.PREPARE YOURSELF TO BE LUCKY

Author says that there is a difference between Luck and Chance.Winning a lottery is not actually lucky...it's a game of chance and probability. Real luck happens when Talent, Hardwork and Chance intersect eachother.

For ex : In 2016, experts assumed that English Football team Leicester City F C has only one in 5000 chance to win the premier league. which means it's next to impossible, the experts also have the analysis also to support this data. The last time this team had ever played on finals was on 1928. But this time something really unexpected happened, they played exceptionally well and even win the premiere league. Then the experts began to say that "They are lucky". But the real truth is that this time the team had real talented players and also their practise and Hardwork was also there. So this is what the author says if you put your Talent, Hardwork and right oppurtunities ( Chance) Luck happens.

2.PICK THE STATISTIC YOU WANT TO BE

Many reaseraches and studies show that in America, more than 33% people are overweight. But this doesn't mean that if you live in America, you have 33% more chance to be overweight. You can always choose to eat healthy, exercise and watch your diet..So you can decide that on which statistics you should be part of. Many people are misleaded by watching these numbers or statistical studies.

For ex : You see an AD on TV that says "If you use our products,your chances of having a certian disease will decrease. But the truth maybe you already have almost next to nil chances of having that disease. So statistics and Odds, are just numbers and our actions will be decided by the type of our emotions which we connects with these numbers...that is if I say that you have 50% chance of winnning this competition, one can say positvley that " oh..I have 50% chance of winning"..or one can take it negativley and say, " oh..I have 50% chance to loss"

Most people make the mistake of copying others. They will see that in Life, or business.. Somebody is being sucessfull by doing a certain thing, then others will also try to copy them. But the truth is that Oppurtunities and Luck will always move, So instead of going after what other's are doing, you should create your own path..it is called systematic unprecdictability. doing thing unpredictabily is one of the best survival skills for any species. Because being unpredictable seperates our path from others, which increases the oods and chances for our sucess.

For Ex : Richard Douglas Fosbury, was interested in sports. He used to try football, Basket ball..and all..but the result was dissapointing, he was a below average performer.He doesn't had natural talent for any sports. Then he decided to tey high jump. At that time High Jump had only 2 popular ways to perfrom, and when he did that ways, he was still performing below average. Then one day, he invented a different style to do High Jump, he did backward flip while performing high jump, and he got better results from that. But professionals didn't liked this at all and they always criticised him, mocked him and even told him " you are wasting your time by doing this". But he suprised everyone when he got qualified for the Olyimpics and won Gold medal. So imagine despite being so many odds against him, he suceeded. bBecause he didn't followed other's path, he created his own path.


4 THE POWER OF PRESISTENCE AND PASSION

Author interwieved many highly sucessfull actors and directors..and there was a pattern ..they never quit trying and also are very passionate for what they are doing.

For Ex: Jonathan, Who was an actor..thinks of himself as the luckiest person in the world. Because his first movie was so perfect, the script, director and all his co actors..and because of that, the movie was a hit. But the truth is that Jonathan had a burning desire to be an actor..when he was really young, he liked to sing and dance, he was born in a small village which doesn't have any oppurtunities for him. So he took action from his part , he moved from his village to Newyork city, took acting classes while working as a waiter, one day..a customer swa him at the restaurent and offered him a small role in acting, he took that role, and after that he made many conncetions in the industry, which leads to him polaying a lead role in a youth series, and then when the series was over, he againg started struggling hard, went throuth many auditions and finally landed his big role .. So if you continue to keep trying, then it will dramatically increases your chances of being suceed


this last one is my favourit

Scientists Rosenthal and Jacobson conducted an expermient. ..the result of the experiment was like, when teachers had an high expectation from a student, then the student also have high expectations from himself and because of that, he works more hard, and because of that, his results will also be better. And on the other hand, teachers had low expextaions from some students, and these students performed below average, because they also had low expectations from themselfs. Higher expectations will produce better results and better results will produce hifgher expectations for next time, so it is like a paradox..and this is called the Pygmalian Effect.

So the main thing here is, if you believe that you are lucky, then you will be more optimistic and perform better, and this will gave us better results..

I am very impressed by the blend and comprehensivity of this book what and excellent view into
persistence and focus as well and honest data and realistic actions added to pure optimistic follow through on genius ideas....

Thank you for your incredible presentation, Narration is fantastic
I believe this is a critical book for anyone in any field , not limited to entrepreneurs or creatives but all humans wanting to manifest an original idea or system.

The author’s examples were And analogies we’re not for the working class. While I understand her references were to be about successful people she could have referred to other than millionaires and billionaires and her stories; this was disappointing

Kaplan has Done it Again

As a fan of The Gratitude Diaries, I was eager to listen to Janice Kaplan's collaboration with Barnaby Marsh and was not disappointed. A terrific collection of stories and anecdotes, personal revelations, and insights from a variety of experts, How Luck Happens is entertaining, educational, and enlightening. She delivers these stories as if you're sitting across from her in an intimate coffee shop. Highly recommend!

Definitely worth a read

Great subject matter. I really like books like this. Things you know...but don’t always apply. Very positive message. I do have to say that it was just a bit to “text bookie” with a feel that it was a long research paper turned into a narrative. I found my my mind wandering toward the end of the book. But overall would recommend it for a good audible read on your work commute.

A lot of what she was talking about made a lot of sense! It's also a mindset!!! I highly recommend this!!!