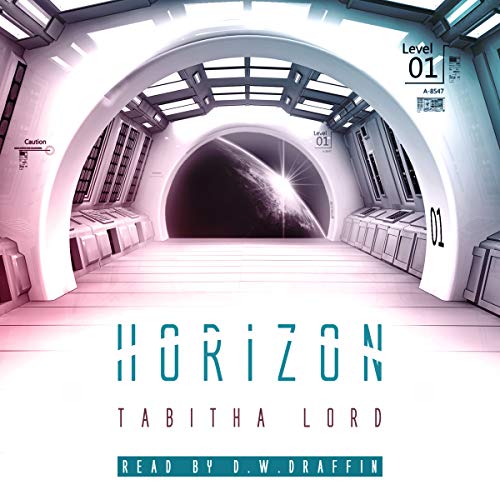 By: Tabitha Lord
Narrated by: DW Draffin
Try for $0.00

Caeli Crys isn't living - she's surviving. On the run after the genocide of her empathic people, she witnesses a spaceship crash near her hidden camp. When she feels the injured pilot suffering from miles away, she can't help but risk discovery to save his life.

Commander Derek Markham awakens stranded on an uncharted planet. His co-pilot is dead, his ship is in ruins, and he's only alive because a beautiful young woman is healing him with her mind.

As Derek recovers, Caeli shares the horror of her past and her fear for the future. When Derek's command ship, Horizon, sends rescue, Derek convinces Caeli to leave with him. But his world is as treacherous as hers - full of spies, interplanetary terrorist plots, and political intrigue. Soon the Horizon team is racing to defend an outlying planet from a deadly enemy, and Caeli's unique skills may just give them the edge they need to save it.

What listeners say about Horizon

This audiobook kept my interest and had a great plot. The narration was well performed and I was entertained by the swift plot movement. The heroine is a tragic character in a lot of ways. There is a definite villain and hero. The hero is a man who survived a crash onto her planet, where she healed him and took care of him. When he’s rescued by his people she goes back with him to their ship and becomes entangled in stopping a violent coup. I felt that the situation on her planet was left kind of up in the air, but perhaps there will be a sequel.

It is difficult to review a book that has received numerous awards already for its writing, and it seems quite well received by other reviewers. I was given the pleasure of listening and reviewing “Horizon”, a science fiction romance audiobook written by Tabitha Lord. Due to an extended long drive, I was able to consume the entire audiobook in a single sitting and I will say that I was entertained and engrossed much of the time. The audiobook narration was decently performed, with a few issues covered later in this review, by DW Draffin. Mr. Draffin appears to be a relative newcomer to the narration scene with just over ten works on Audible at the time of this review. If you like deep and well-written science fiction that includes a fair amount of romance, I think you would enjoy picking up a copy of Horizon and giving it a listen. If you are instead a hard-core space opera type of person, you may find the level of tech and shooting taken up by the softer and more emotional parts of the book. Don’t get me wrong, it was a good book, it just was different from what I had initially expected it would be. The story moves between various location from being on the planet to being in space. It also pivots between time by keeping us in the present while feeding us details form the past. The author does a very good job of unraveling the story elements and packing things nicely into this package. Would I have preferred more fights, tech, and space aspects, sure, one can never have enough of these? But, come to the book knowing what it is about will make it that much more enjoyable when you do listen.

I like the main characters and felt attached to who they were along with what each does that drives them. The characters felt like they had dimension, cause, and purpose. There were moral decisions, consequences for one’s actions and more. On the planet, the book felt tight and focused. Once in space, things opened up a bit and I felt some of the main character’s actions were no longer their choices; sometimes they were not. Not only did the author bring in a conflict between characters, but we are also given a view into a great civil war that forever separated this race of people into good and bad. Much of the drive of the main character is for revenge, but to accomplish this, she first needs to survive to be stalked by her enemies.

I enjoyed the diversity and uniqueness of the main characters in the story. Having the empath ability made the potential for misuse a bit more a reality. The story had a fair amount of suspense and mystery which seemed to unroll as the story progressed. And the use of many flashbacks helped to solidify what motivates the character. I’m not sure if it was the author intended or not, but I felt that the romance aspect of the story often conflicted with the characters direction and decision-making ability. As with real life, romance seems to have clouded over the minds of the characters to make the right choices.

What would I have changed? Some of the writing felt more young adult (YA) than I would have suspected. This seems to improve as the story got closer to the end. I found the alien race to be too human-like to feel alien. Their mannerisms, food, entertainment, etc. all felt to Earth-like. The ability to communicate was too quick and seemed near perfect instead of some form of Google Translate. A few of the romance scenes made me feel uncomfortable as they came very close to being adult only rated, yet often at the last minute cut the scene to something else. A few of the other characters felt flat and were only there for a specific plot fulfilling reason. Could there have been more guns, ships, tech, and aliens, you bet as there is never enough of this for a science fiction fan. None of these make the book unenjoyable, just observations I wanted to point out for those not knowing what to expect before they dive in.

The audiobook’s narration, for me, was not at the level one would expect from a story of this caliber. I feel there were some major issues during and after the production process making the book feel unfinished or rushed. A number of chapters were titled “After” which made me feel the chapter titles were going to be added at a later time and were not. In many places, there were noticeable edits or plugs where the initial narration left out a portion of the words and they needed to be added at a different time; including different level and mic settings. Audio patching should be less noticeable then they were in this piece. Additionally, there were a few places where I recall hearing swallowing and a few points where the audio cut seemed incorrect. The narrator’s voice was smooth and pleasant to listen too, I only wish there were a few checks on the production quality prior to being released in audiobook format.

For parents and younger readers, note the book does contain some profanity which seemed odd for an alien race to use. There are also some rather descriptive scenes of romance which may be inappropriate for younger readers. At times I also felt uncomfortable as an adult. The story was engaging and compelling, however, if you are at all offended by the use of vulgar language, I would recommend you locate a different book.

In summary, the foundations of the story were solid. It was both very enjoyable and entertaining. I liked the character complexity and situations they found themselves in. If you are a fan of science fiction, and you do not mind having a level of romance included, I think you will find this book to your liking. For the hardcore Sci-Fi listener, if you can get past the softer side of the story, you will also enjoy the tale. I can see why it won the number of awarded it had. IF you are not a fan of mediocre audiobook narration, including artifact issues, you may want to pick up a copy of Horizon in another format.

Audiobook was provided for review by the author/narrator/publisher.
Please find this complete review and many others at my review blog.
[If this review helped, please press YES. Thanks!]

Whole story could be told in an hour.

Narrator was the best thing about this audio book. Promising idea with interesting characters, but just soo much focus on minutia. End was abrupt. I cannot believe this story received awards.

The story is probably okay, but the narration is terrible. After about an hour I just couldn't listen anymore.

Excellent plot. Caeli have a terrible life losing her love and friends. When she helped Comnander Derek Markham from serious injuries, they formed a beautiful friendship and love for each other bloomed. She teamed up with Derek and his Alliance to fight against tyranny and evil. The story flows smoothly and DW Draffin narrated /performed superbly. I am glad Bk 2 is already available in Audible and I hope more books will be published soon. A fantastic story. Tabitha Lord is a very talented writer. Bravo!

I had the pleasure of reading a copy of this book a few years ago. But this time around, it's the audiobook and it's a completely different experience. While, for me, the book starts a little slower, it does get right into the moment Caeli finds Derek. Immediately, I fell in love with their blooming friendship and the romance that comes later. The horrendous adventures this pair undertakes is so well described and everything plays out. The entire book comes to a very satisfying ending, leaving you with the feeling that it could end there, but has an opening for continuation. Luckily, I do own the second book in paperback and can continue because I want to.
The audio for this book was smooth and clear. DW Draffin had a great performance. He definitely gave Derek a voice. I do, kinda, wish there'd been a female narrator for Caeli's perspective, but DW still did amazing on his own. I'm really glad I had the opportunity to listen to this book.

This book had been one I wanted to read for a while but never got around to it. With the audio version it made it so much easier because I just listened to it while doing housework. The narrator was great. He has a calming soothing voice that made the story easy to listen too.

Horizon is a science fiction romance book. Science fiction isn't one of genres that I read often but I occasionally dip into that genre. It took me a little to get comfy with the story line. We get past and present. The past parts really helped me connect and understand the characters. Caeli is a very strong character. She has been living alone. When she see Derek's spaceship crash near her camp she goes to help. Caeli heals with her mind. Derek and Caeli are from different planets. Derek and Caeli have a connection. This story has a lot going on in it and I enjoyed reading it.